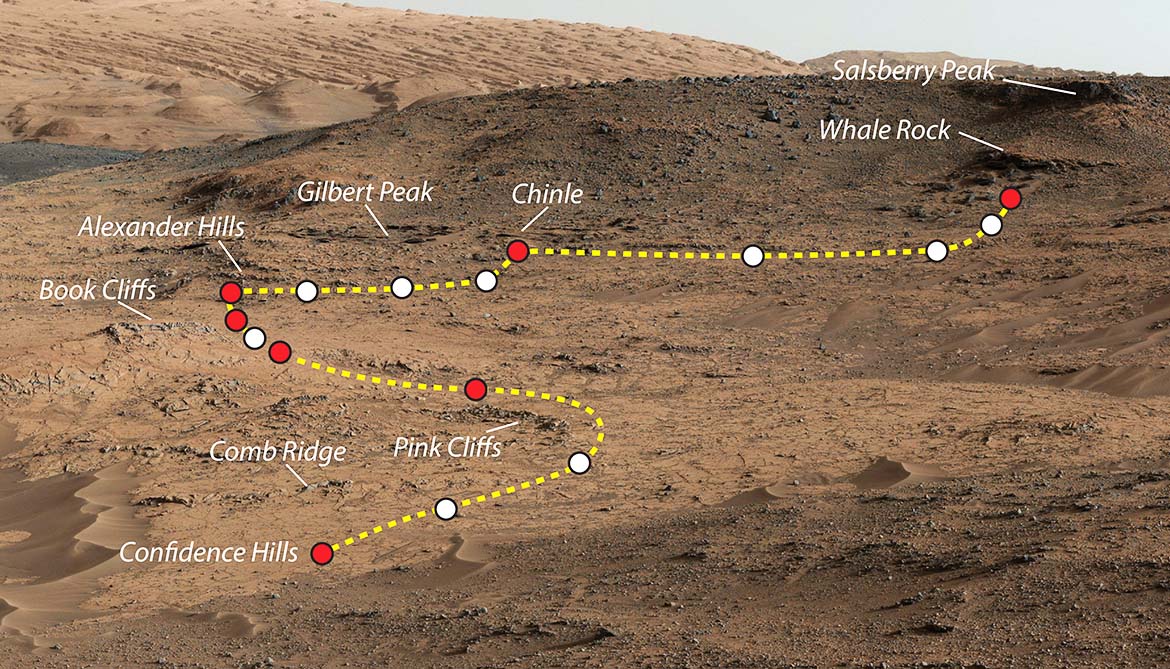 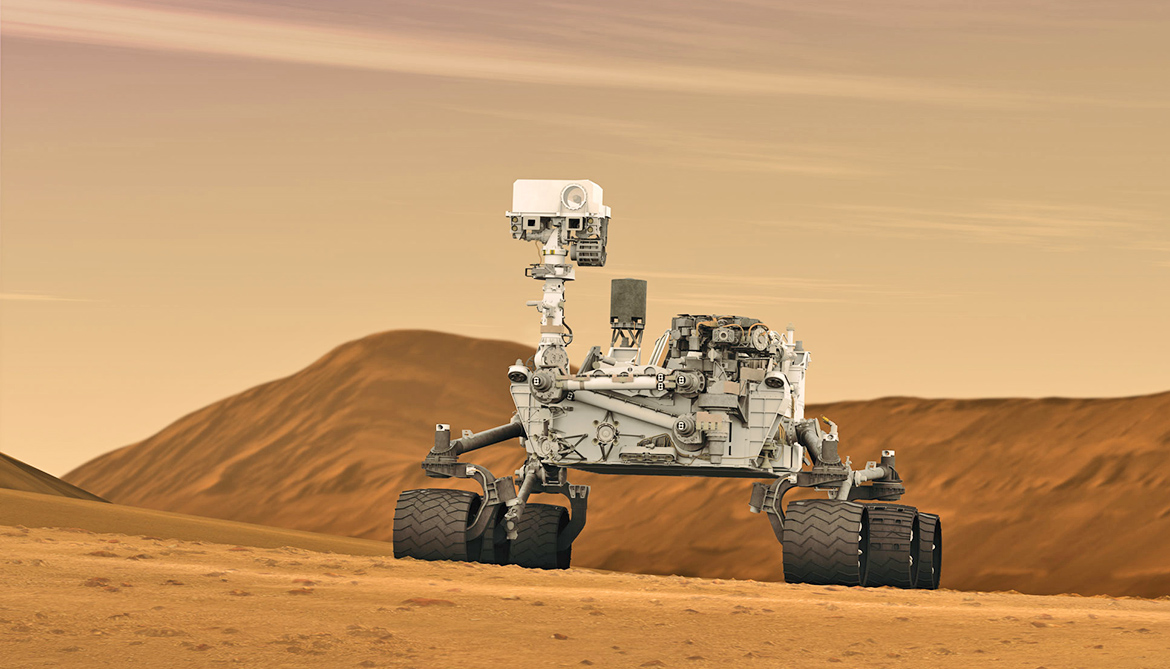 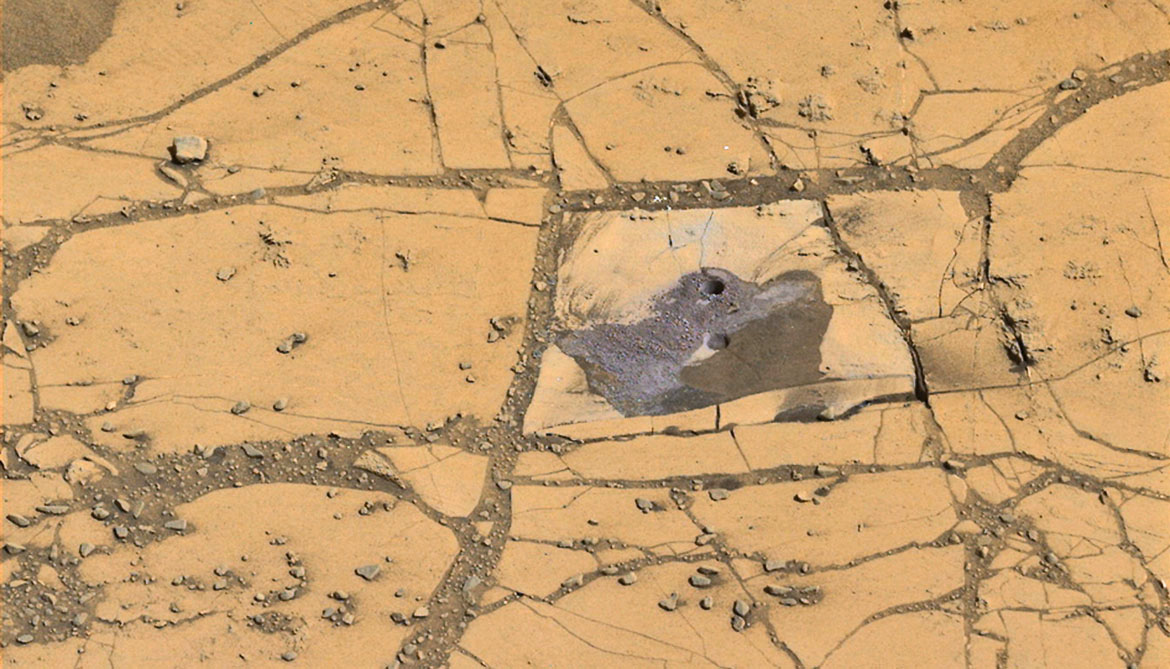 The discovery could help scientists piece together the ancient environment in Curiosity’s Gale Crater landing site.

The presence of hematite at the base of Mount Sharp, a three-mile-high mountain in the center of the crater, was first detected several years ago using a mineral-mapping instrument on NASA’s Mars Reconnaissance Orbiter.

The confirmation of that orbital detection in samples taken by the rover is a key step in the mission, says Ralph Milliken, assistant professor of earth, environmental and planetary science at Brown University and a member of Curiosity’s science team.

“We’ve reached the part of the crater where we have the mineralogical information that was important in selection of Gale Crater as the landing site. Now that we have a solid link between our orbital detections and what we see on the ground, we can come up with more detailed hypotheses about the environment on Mars when these rocks were formed.”

Curiosity arrived at the base of Mount Sharp in September. The mountain’s geological layers hold a four-billion-year record of environmental conditions in the region. As the rover climbs through those layers, mission scientists will look for clues about what those ancient environments were like and how they changed through time.

Curiosity’s first bite of those rocks, taken with the rover’s hammering drill and analyzed by the Chemistry and Mineralogy (CheMin) instrument, shows that hematite accounts for as much as 8 percent of the sample. That’s a much higher concentration than has been found at other locations Curiosity has explored, including Yellowknife Bay, where the rover found evidence of an ancient lakebed.

The amount and type of hematite detected at Mount Sharp indicates a much more oxidized environment than at Yellowknife Bay.

“That alone is very interesting because it tells us that the conditions here, in terms of the role of water interacting with rock and the atmosphere, were different from what we’ve seen in these previous locations,” Milliken says. “So we know we have different environmental conditions, and now it’s a matter of understanding in detail what this means.”

Heading up the mountain

Curiosity may spend the next several weeks in and around the area of the hematite detection, a series of outcrops called Pahrump Hills, before proceeding farther up the mountain. Those higher layers include an erosion-resistant band of rock with an even stronger orbital signature of hematite, dubbed “Hematite Ridge.”

“One of the things we’ll want to address is the distribution of hematite within the area,” Milliken says. “Is it widespread or is it localized pockets within the rock? That can be helpful to understand the oxidation processes that formed the hematite.”

The original orbital detection of hematite was made with the Compact Reconnaissance Imaging Spectrometer for Mars (CRISM) instrument aboard the Mars Reconnaissance Orbiter. John “Jack” Mustard, professor of earth, environmental and planetary science at Brown, is the deputy principal investigator on CRISM.

Curiosity’s verification of the CRISM data shows the importance of remote sensing techniques in planning future missions to Mars, including the next rover, scheduled to launch in 2020, Milliken says.

“I think it’s a good lesson in how powerful it is to have a full Mars program that combines orbital missions with rover missions. This will bolster our confidence, looking forward to landing site selection for the Mars 2020 rover, in what we’re able to learn from our orbital assets.”

The Mars Science Laboratory mission and its Curiosity rover, as well as the Mars Reconnaissance Orbiter and Mars 2020 missions are managed by the Jet Propulsion Laboratory, a division of the California Institute of Technology in Pasadena, for NASA’s Science Mission Directorate in Washington.

Sanding trick gets water to slide right off surfaces