U. ROCHESTER (US) — Madagascar, long known as a hot spot of biodiversity, may be past its peak for species development, according to new research.

Although it represents only one percent of the Earth’s area, it is home to about three percent of all animal and plant species on the planet.

“A staggering number of species are found only on Madagascar,” says Daniel Scantlebury, a Ph.D. student in biology at the University of Rochester, “but this research shows there are limits to the number of species the island can sustain, and Madagascar may currently be at those limits.” 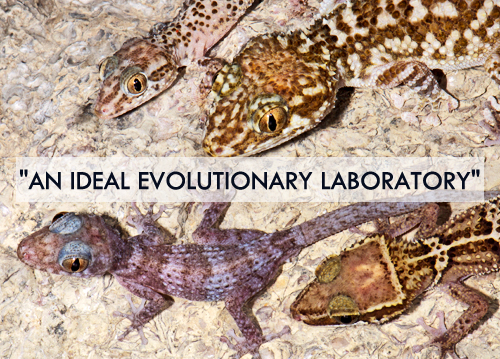 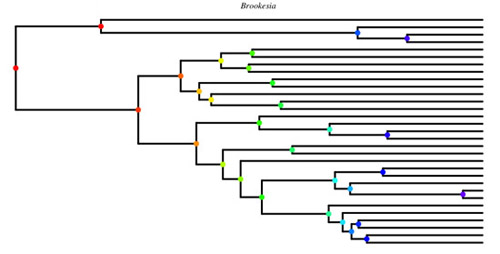 A tree diagram of the Brookesia chameleons on Madagascar shows a decline in the rate of species formation within the clade. The horizontal lines represent individual species, with the lengths of the lines showing relative time. The nodes depict the points at which new species are formed. The relatively few nodes at the right of the diagram, as we approach the present day, illustrate a decline in species diversification. (Credit: Daniel Scantlebury/U. Rochester)

Scantlebury analyzed the evolutionary records of seven groups of reptiles and amphibians that are found across the island, including tiny leaf chameleons (which can rest comfortably on a matchstick), colorful and charismatic day geckos (of television insurance ad fame), and the bizarre leaf-tailed geckos (whose tails are flat and leaf-shaped).

By constructing evolutionary tree diagrams to compare the relative ages of the species, he found that there has been a noticeable decrease in the rate of new species formation on Madagascar since the island became isolated following its split from the Gondwana super-continent some 90 million years ago.

This pattern is thought to result from adaptive radiation, the same process that produced Darwin’s finches.

According to the principles of adaptive radiation, organisms develop rapidly into new species in order to take advantage of resources that exist in vacant environmental niches. When evolution fills those niches with new species, the rate of species diversification either slows or comes to an end.

Previous studies sampled species within clades—which are groups of species that share a common ancestor—but did not look at every species within those groups.

Scantlebury analyzed every event that resulted in a new species within the clades and found that, since the origin of each clade, it has taken longer and longer for new species to develop—a result that’s expected when species development reaches maximum capacity in a habitat.

“Some of the earlier research showed an early burst of diversification among groups located in rainforests, supporting the principles of adaptive radiation,” says Scantlebury, whose findings appear in Proceedings of the Royal Society B. “My study took the next step by looking at subsequent declines.”

Scantlebury hopes his paper will spur researchers to study the diversification records of other Malagasy species to determine whether those clades are also experiencing declines in diversification rates. “I am curious to know if this pattern holds for other iconic groups of Madagascan species, such as lemurs and the crown-of-thorn plants.”

Scantlebury calls Madagascar “an ideal evolutionary laboratory” for studying species formation because it has long been isolated and geologically stable relative to other regions.

“The fact that I observed independent declines in seven ecologically distinct groups of animals supports the view that rate declines are a general trend of species formation, not just on Madagascar, but everywhere else on Earth.”