U. MARYLAND (US) — An engineer says his new wireless monitoring system could avert the kind of bridge collapse that killed 13 and injured 145 along Minneapolis’ I-35W on August 1, 2007.

And, he says, it could do so at one-one-hundredth the cost of current wired systems.

“Potentially hundreds of lives could be saved,” says University of Maryland electrical engineering researcher Mehdi Kalantari. “One of every four U.S. highway bridges has known structural problems or [has] exceeded its intended life-span. Most only get inspected once every one or two years. That’s a bad mix.” 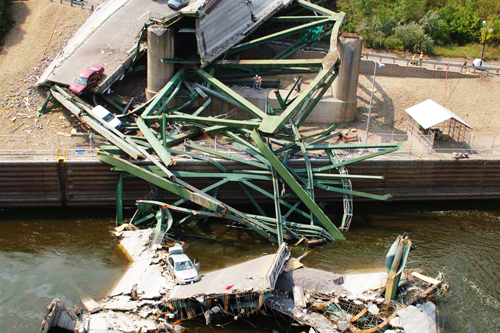 On August 1, 2007, a bridge collapsed along Minneapolis’ I-35W, killing 13 and injuring 145. The National Transportation Safety Board identified a faulty gusset plate—a connector essential to the bridge’s structural integrity—as a likely cause of the disaster. Newer “smart” bridges, including the I-35W replacement, have embedded wired networks of sensors. But Mehdi Kalantari says the cost is too high for use on older spans.

Kalantari has created tiny wireless sensors that monitor and transmit minute-by-minute data on a bridge’s structural integrity. A central computer analyzes the data and instantly warns officials of possible trouble. He plans to scale-up manufacture in the fall.

“If this kind of technology had been available in Minnesota four years ago, there’s a good chance the fatal bridge collapse could have been avoided,” Kalantari adds. “This new approach makes preventive maintenance affordable—even at a time when budgets are tight. Officials will be able to catch problems early and have weeks or month to fix a problem.”

Kalantari’s sensors measure indicators of a bridge’s structural health, such as strain, vibration, flexibility, and development of metal cracks. The sensors are small, wireless, rugged, and require practically no maintenance, he says.

They are expected to last more than a decade, with each costing about $20. An average-sized highway bridge would need about 500 sensors for a total cost of about $10,000.

Newer “smart” bridges, including the I-35W replacement in Minneapolis, have embedded wired networks of sensors. But Kalantari says the cost is too high for use on older spans.

“A wired network approach will cost at least 100 times more than a wireless alternative, and that’s simply unaffordable given the strain on local, state, and federal budgets,” Kalantari estimates.

Current federal requirements call for an on-site, visual inspection of highway bridges once every two to five years, depending the span’s condition. Bridges deemed structurally deficient must be inspected once each year.

In its report on the Minneapolis bridge collapse, the National Transportation Safety Board identified a faulty gusset plate—a connector essential to the bridge’s structural integrity—as a likely cause of the disaster. The report notes an “inadequate use of technologies for accurately assessing the condition of gusset plates on deck truss bridges.”

For almost a year, Kalantari has been testing his device in conjunction with the Maryland Department of Transportation, measuring the structural parameters of highway bridges in a real setting. This has enabled him to optimize the device’s performance and energy consumption. His updated model is smaller and ten times more energy efficient than its predecessor.

The testing allows him to track the bridge’s response to changes in weather conditions and traffic.

For example, he’s measuring how the metal expands and contracts as the temperature rises and falls. Also, he can compare the metal’s response during periods of peak and light loads.

Kalantari hopes to expand the field testing more broadly in Maryland and to deploy sensors fully across the spans in coming weeks.

As with conventional technology, the sensors measure variables reflecting the structural integrity of a bridge, such as strain, vibration, tilt, acceleration, deformation and cracking.

Each sensor—about the size of a playing card—is deployed at a strategic point on the support structure, and feeds back measurements approximately every 60 seconds to a central computer. There the data is analyzed.

Serious problems are more obvious and easier to interpret, and so trip an alarm very quickly. Early-stage problems are more subtle, and it may take up to a few days until the system is confident enough to report a structural integrity issue.

The sensors are less than five millimeters thick and have four thin, flexible layers. The first senses and measures structural parameters; the second stores energy; the third communicates data; and the outer layer harvests energy from ambient light and ambient radio waves.

Kalantari says he’s working in an “emerging market with no widely accepted commercial solution now available.” To commercialize his technology, he founded Resensys LLC, a start-up in the University of Maryland’s Technology Advancement Program incubator. He expects to scale-up production in September.

More news from the University of Maryland: www.newsdesk.umd.edu

Bioelectric device on your skin could start with a pencil