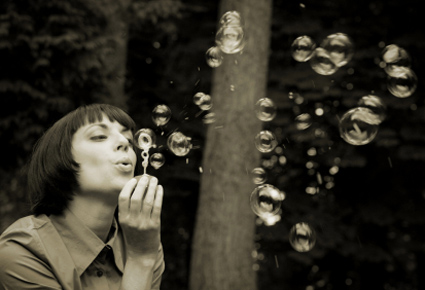 In a recent study, researchers showed individuals with memory loss clips of happy and sad movies. Although the participants couldn’t recall what they had watched, they retained the emotions elicited by the clips. “Indeed, they still felt the emotion. Sadness tended to last a bit longer than happiness, but both emotions lasted well beyond their memory of the films,” says lead researcher Justin Feinstein.  (Courtesy: iStockphoto)

U. IOWA (US)—The feelings associated with an experience linger even after memories fade, according to a recent study of patients with amnesia.

University of Iowa researchers studied five neurological patients with damage to their hippocampus, a part of the brain that’s critical for transferring short-term memories into long-term storage. Damage to the hippocampus prevents new memories from being acquired. This same type of amnesia is an early sign of Alzheimer’s disease.

For the study, published in the Early Edition of the Proceedings of the National Academy of Sciences, researchers showed individuals with memory loss clips of happy and sad movies. Although the participants couldn’t recall what they had watched, they retained the emotions elicited by the clips.

The experiment started with an emotion-induction technique using powerful film clips. Each amnesic patient viewed 20 minutes of either sad or happy movies on separate days. The movies triggered the appropriate emotion, ranging from intense bouts of laughter during happy films to tears of sorrow during sad ones.

About 10 minutes after the clip ended, researchers gave patients a memory test to see if they could recall what they had watched. As expected, the patients were extremely impaired. A healthy person recalls about 30 details from each clip, but one patient couldn’t recall a single detail.

After the memory test, patients answered questions to gauge their emotions.

“Indeed, they still felt the emotion. Sadness tended to last a bit longer than happiness, but both emotions lasted well beyond their memory of the films,” Feinstein says. “With healthy people, you see feelings decay as time goes on. In two patients, the feelings didn’t decay; in fact, their sadness lingered.”

These findings challenge the popular notion that erasing a painful memory can abolish psychological suffering. They also reinforce the importance of attending to the emotional needs of people with Alzheimer’s, which is expected to affect as many as 100 million people worldwide by 2050.

“Age is the greatest risk factor for Alzheimer’s, and there’s currently no cure,” Feinstein notes. “What we’re about to face is an epidemic. We’re going to have more and more baby boomers getting older, and more and more people with Alzheimer’s disease. The burden of care for these individuals is enormous.

“What this research suggests is that we need to start setting a scientifically informed standard of care for patients with memory disorders. Here is clear evidence showing that the reasons for treating Alzheimer’s patients with respect and dignity go beyond simple human morals.”

Hiding small stuff from your partner is a good thing

Music can benefit people with Alzheimer’s and caregivers

Mandela Effect test: Which of these images is correct?