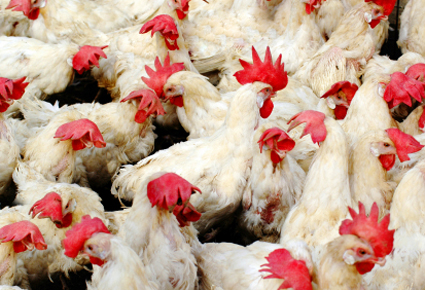 More than 1.7 billion animals are used in livestock production worldwide and occupy more than one-fourth of the Earth’s land, according to a new report. Findings also show that although about 1 billion poor people worldwide derive at least some part of their livelihood from domesticated animals, the rapid growth of commercialized industrial livestock has reduced employment opportunities for many. (Courtesy: iStockphoto)

STANFORD (US)—The growing worldwide demand for meat is likely to have a significant impact on human health, the environment, and the global economy in the next 50 years, according to a new report by an international research team.

“The livestock industry is massive and growing,” says Harold Mooney, professor of biology and senior fellow at the Woods Institute for the Environment at Stanford University.

“This is the first time that we’ve looked at the social, economic, health, and environmental impacts of livestock in an integrated way and presented solutions for reducing the detrimental effects of the industry and enhancing its positive attributes,” he says.

Mooney is the co-editor of the report, Livestock in a Changing Landscape, which finds:

Although about 1 billion poor people worldwide derive at least some part of their livelihood from domesticated animals, the rapid growth of commercialized industrial livestock has reduced employment opportunities for many, according to the report.

In developing countries, such as India and China, large-scale industrial production has displaced many small, rural producers, who are under additional pressure from health authorities to meet the food safety standards that a globalized marketplace requires.

Beef, poultry, pork, and other meat products provide one-third of humanity’s protein intake, but the impact on nutrition across the globe is highly variable.

“Too much animal-based protein is not good for human diets, while too little is a problem for those on a protein-starved diet, as happens in many developing countries,” Mooney notes.

While overconsumption of animal-source foods—particularly meat, milk, and eggs—has been linked to heart disease and other chronic conditions, these foods remain a vital source of protein and nutrients  throughout the developing world.

The authors cited a recent study of Kenyan children that found a positive association between meat intake and physical growth, cognitive function, and school performance.

Human health also is affected by pathogens and harmful substances transmitted by livestock. Emerging diseases, such as highly pathogenic avian influenza, are closely linked to changes in the livestock production but are more difficult to trace and combat in the newly globalized marketplace.

The livestock sector is a major environmental polluter, and much of the world’s pastureland has been degraded by grazing or feed production. Also, many forests have been clear-cut to make way for additional farmland.

Animal waste is another serious concern. “Because only a third of the nutrients fed to animals are absorbed, animal waste is a leading factor in the pollution of land and water resources, as observed in case studies in China, India, the United States and Denmark,” the authors write.

Total phosphorous excretions are estimated to be seven to nine times greater than that of humans, with detrimental effects on the environment.

“Without a change in current practices, the intensive increases in projected livestock production systems will double the current environmental burden and will contribute to large-scale ecosystem degradation unless appropriate measures are taken.”.

“We want to protect those on the margins who are dependent on a handful of livestock for their livelihood,” Mooney stresses.

“On the other side, we want people engaged in the livestock industry to look closely at the report and determine what improvements they can make.”

Countries should adopt policies that provide incentives for better management practices that focus on land conservation and more efficient water and fertilizer use. But calculating the true cost of meat production is a daunting task.

“So much of the problem comes down to the individual consumer,” says co-editor Fritz Schneider of the Swiss College of Agriculture (SHL).

“People aren’t going to stop eating meat, but I am always hopeful that as people learn more, they do change their behavior. If they are informed that they do have choices to help build a more sustainable and equitable world, they can make better choices.”