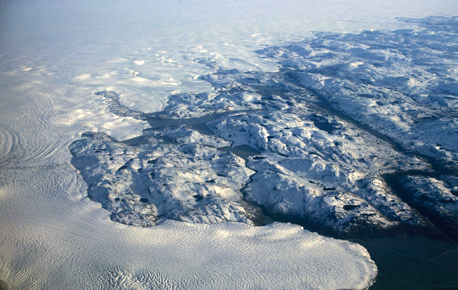 New research suggests an additional 2 degrees of global warming could commit the planet to 6 to 9 meters (20 to 30 feet) of long-term sea level rise as vulnerable polar ice sheets melt. This rise would inundate low-lying coastal areas where hundreds of millions of people now reside. Above, Greenland ice sheet photographed from an airplane. (Credit: Hannes Grobe/Alfred Wegener Institute for Polar and Marine Research)

PRINCETON (US)—The planet’s polar ice sheets are vulnerable to large-scale melting even under moderate global warming scenarios. Such melting would lead to a large and relatively rapid rise in global sea level, submerging many coastal areas.

That finding is based on new analysis of the geological record of the Earth’s sea level, carried out by scientists at Princeton and Harvard universities and published in the Dec. 16 issue of Nature.

The researchers employed a novel statistical approach that reveals an additional 2 degrees of global warming could commit the planet to 6 to 9 meters (20 to 30 feet) of long-term sea level rise.

This rise would inundate low-lying coastal areas where hundreds of millions of people now reside. It would permanently submerge New Orleans and other parts of southern Louisiana, much of southern Florida and other parts of the U.S. East Coast, much of Bangladesh, and most of the Netherlands, unless unprecedented and expensive coastal protection were undertaken.

And while the researchers’ findings indicate that such a rise would likely take centuries to complete, if emissions of greenhouse gases are not abated, the planet could be committed during this century to a level of warming sufficient to trigger this outcome.

As part of the study, the researchers compiled an extensive database of geological sea level indicators for a period known as the last interglacial stage about 125,000 years ago. Polar temperatures during this stage were likely 3 to 5 degrees Celsius (5 to 9 degrees Fahrenheit) warmer than today, as is expected to occur in the future if temperatures reach about 2 to 3 degrees Celsius (about 4 to 6 degrees Fahrenheit) above pre-industrial levels.

“The last interglacial stage provides a historical analog for futures with a fairly moderate amount of warming; the high sea levels during the stage suggest that significant chunks of major ice sheets could disappear over a period of centuries in such futures,” says study author Robert Kopp, who conducted the work as a postdoctoral researcher in Princeton’s Department of Geosciences and Woodrow Wilson School of Public and International Affairs.

“Yet if the global economy continues to depend heavily on fossil fuels, we’re on track to have significantly more warming by the end of century than occurred during the last interglacial. I find this somewhat worrisome,” Kopp adds.

Michael Oppenheimer, a professor of geosciences and international affairs in Princeton’s Woodrow Wilson School, adds: “Despite the uncertainties inherent in such a study, these findings should send a strong message to the governments negotiating in Copenhagen that the time to avoid disastrous outcomes may run out sooner than expected.”

Previous geological studies of sea level benchmarks such as coral reefs and beaches had shown that, at many localities, local sea levels during the last interglacial stage were higher than today. But local sea levels differ from those in this earlier stage; one major contributing factor is that the changing masses of the ice sheets alter the planet’s gravitational field and deform the solid Earth.

As a consequence, inferring global sea level from local geological sea level markers requires a geographically broad data set, a model of the physics of sea level, and a means to integrate the two. The study’s authors provide all three, integrating the data and the physics with a statistical approach that allows them to assess the probability distribution of past global sea level and its rate of change.

The researchers determined through their analysis that there is a 95 percent probability that, during the last interglacial stage, global sea level peaked more than 6.6 meters (22 feet) above its present level. They further found that it is unlikely (with a 33 percent probability) that global sea level during this period exceeded 9.4 meters (31 feet).

Sea levels during the last interglacial stage are of interest to scientists and important to policymakers for several reasons. Most notably, the last interglacial stage is relatively recent by geological standards, making it feasible for climate scientists to develop a credible sea level record for the period, and is the most recent time period when average global temperatures and polar temperatures were somewhat higher than today. Because it was slightly warmer, the period can help scientists understand the stability of polar ice sheets and the future rate of sea level rise under low to moderate global warming scenarios.

The findings indicate that sea level during the last interglacial stage rose for centuries at least two to three times faster than the recent rate, and that both the Greenland and West Antarctic ice sheet likely shrank significantly and made important contributions to sea level rise. However, the relative timing of temperature change and sea level change during the last interglacial stage is fairly uncertain, so it is not possible to infer from the analysis how long an exposure to peak temperatures during this stage was needed to commit the planet to peak sea levels.

Researchers from Princeton and Harvard University contributed to the work.