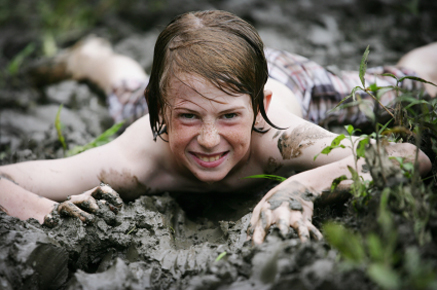 Research by anthropologist Thomas McDade suggests inflammatory systems may need a higher level of exposure to common everyday bacteria and microbes to guide their development. “In other words, inflammatory networks may need the same type of microbial exposures early in life that have been part of the human environment for all of our evolutionary history to function optimally in adulthood.”

NORTHWESTERN (US)—Are hyper-hygienic parents getting too worked up over germs? A new study suggests exposure to common germs early in life may actually protect against cardiovascular diseases in adulthood.

“Contrary to assumptions related to earlier studies, our research suggests that ultra-clean, ultra-hygienic environments early in life may contribute to higher levels of inflammation as an adult, which in turn increases risks for a wide range of diseases,” says Thomas McDade, associate professor of anthropology at Northwestern University and lead author of the study.

Relatively speaking, humans only recently have lived in such hyper-hygienic environments, he stresses.

The research suggests that inflammatory systems may need a higher level of exposure to common everyday bacteria and microbes to guide their development.

“In other words, inflammatory networks may need the same type of microbial exposures early in life that have been part of the human environment for all of our evolutionary history to function optimally in adulthood,” says McDade.

The Northwestern study is the first research on microbial effects on inflammatory systems in infancy that relate in later life to diseases associated with aging. Details of the findings were published online in the journal Proceedings of the Royal Society B: Biological Sciences.

The research took advantage of a longitudinal study of Filipinos, following participants in utero through 22 years of age, to get a better understanding of how environments early in life affect C-reactive protein (CRP) production in adulthood.

Levels of the protein rise in the blood due to inflammation, an integral part of the immune system’s fight against infection.

CRP research mostly has centered on the protein as a predictor of heart disease, independent of lipids, cholesterol and blood pressure, though researchers still dispute that association.

Researchers have been looking at excess body fat as a primary source of pro-inflammatory cytokines that produce CRP and behavioral factors related to diet, exercise, and smoking.

The CRP research largely has been conducted in relatively affluent settings, such as in the United States, with low levels of infectious diseases.

The Northwestern researchers were interested in what CRP production looks like in the Philippines, a population with a high level of infectious diseases in early childhood compared to Western countries.

Relative to Western countries, the Philippines also has relatively low rates of obesity and cardiovascular diseases, consistent with the Northwestern research findings.

Blood tests showed that C-reactive protein was at least 80 percent lower for study participants in the Philippines when they reached young adulthood, relative to their American counterparts, though the Filipinos suffered from many more infectious diseases as infants and toddlers.

The Northwestern study drew its data from a longitudinal study that began in the early 1980s with 3,327 Filipino mothers in the third trimester of pregnancy. The mothers were interviewed for behaviors related to care giving, and breast feedings were recorded.

The household environment was assessed in terms of socioeconomic resources, hygiene (whether domestic animals, such as pigs and dogs, roamed freely), and density of inhabitants.

Researchers visited with the mothers at the delivery of their infants and subsequently every two months for the first two years of the children’s lives.

Thereafter, the researchers followed up with the children every four or five years until they reached their early 20s. The records they kept on the children include data on infectious diseases, growth in height, and weight.

“In the U.S we have this idea that we need to protect infants and children from microbes and pathogens at all possible costs,” McDade concludes.

“But we may be depriving developing immune networks of important environmental input needed to guide their function throughout childhood and into adulthood.

“Without this input, our research suggests, inflammation may be more likely to be poorly regulated and result in inflammatory responses that are overblown or more difficult to turn off once things get started.”