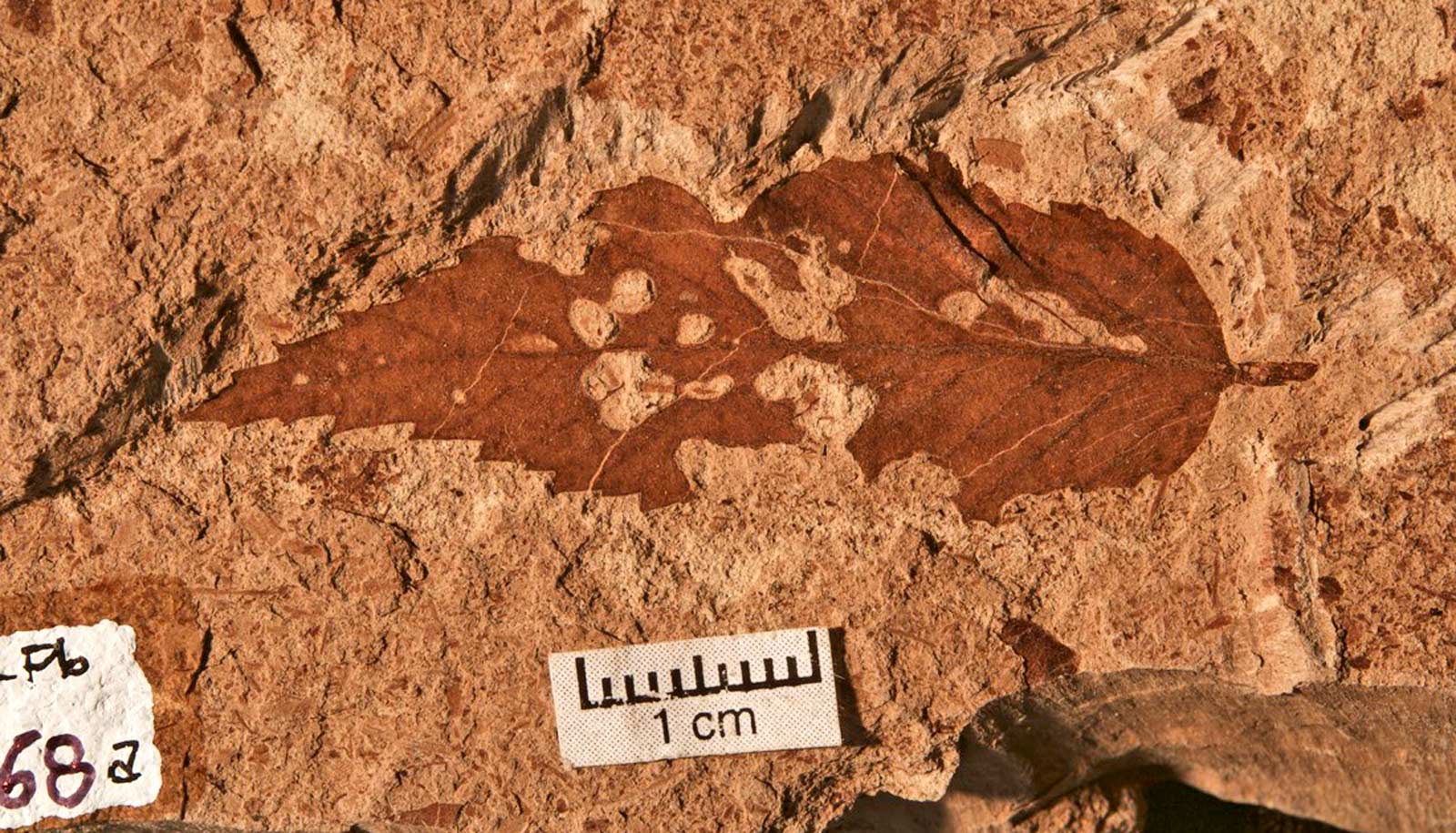 Fossil leaf with insect feeding damage, including holes and feeding along the leaf margins. The fossil is from the latest Cretaceous Lefipán Formation (67-66 Ma) in Patagonia, Argentina. (Credit: Michael Donovan/Penn State) 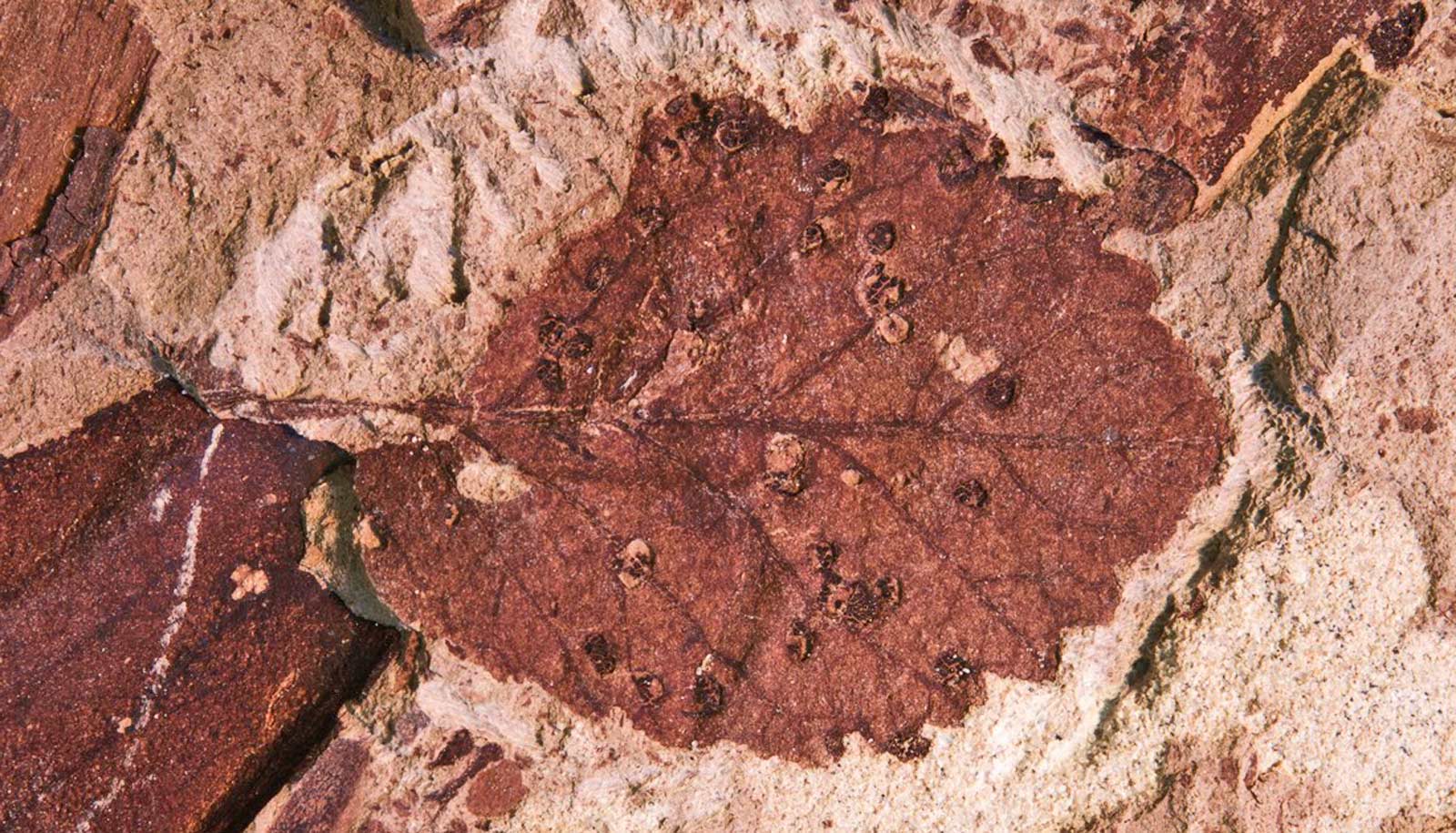 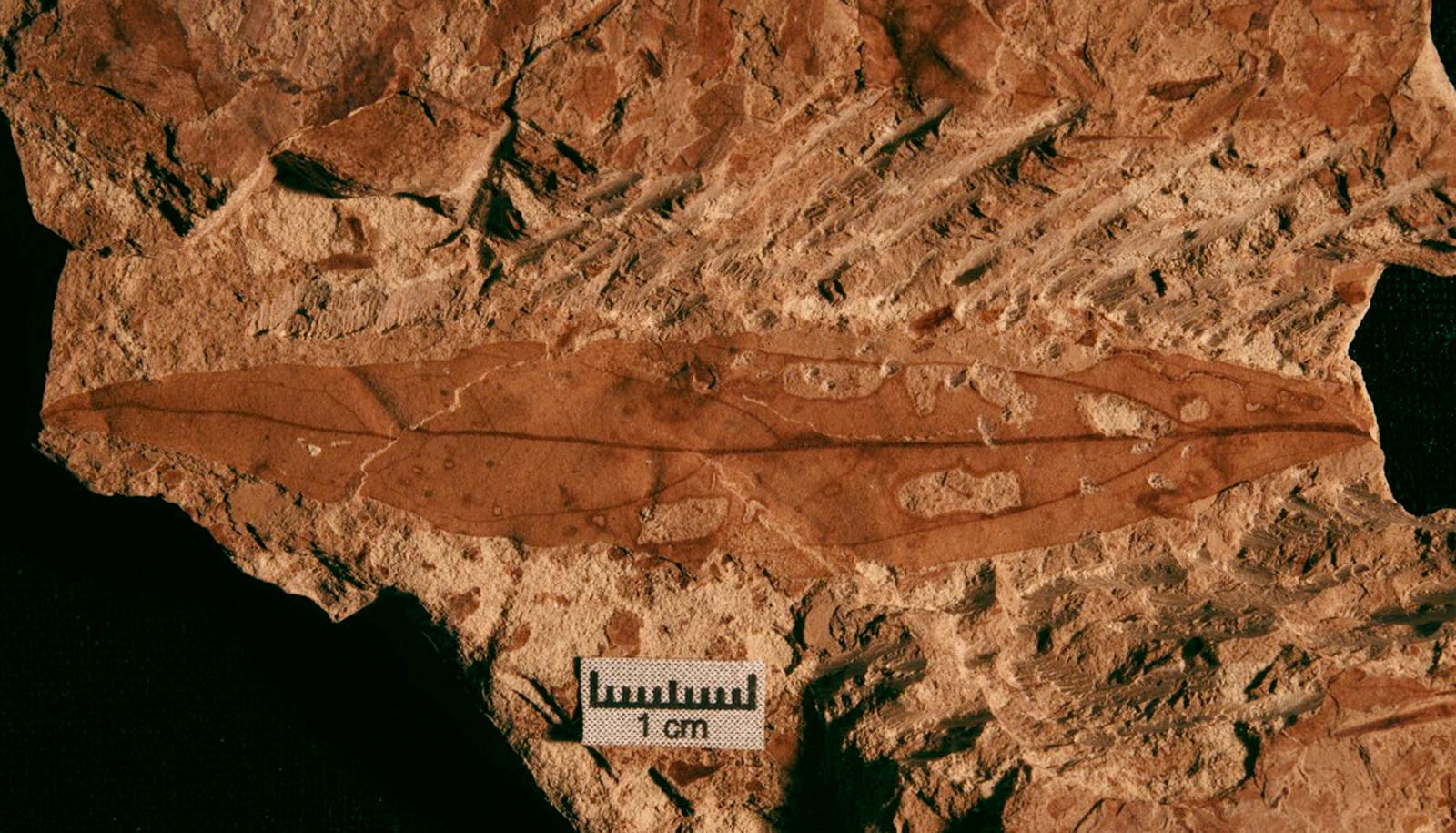 Insect feeding damage on a fossil leaf, including holes and a leaf mine (bottom right). The fossil is 67-66 million years old and from the Lefipán Formation in Patagonia, Argentina. (Credit: Michael Donovan/Penn State) 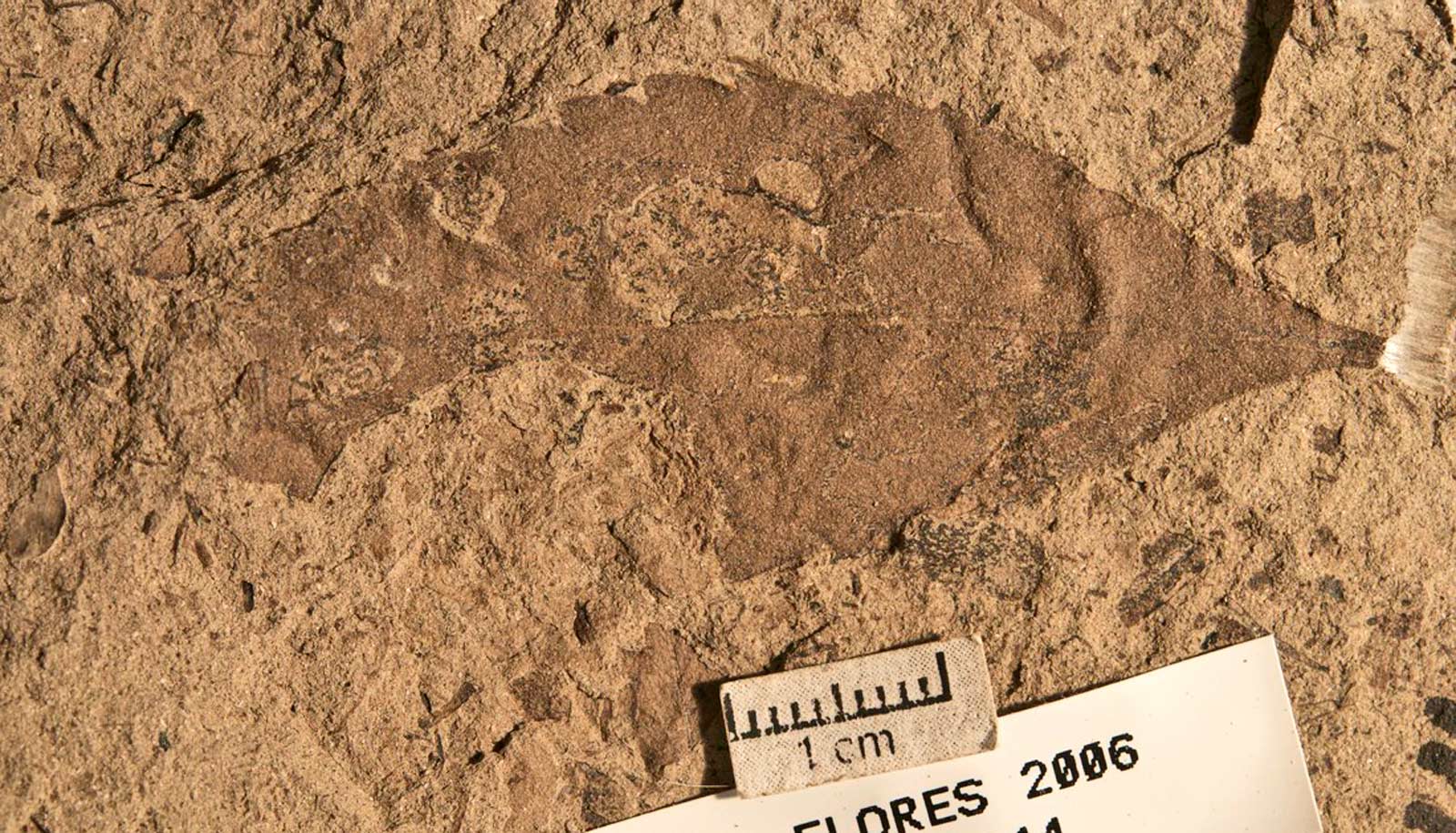 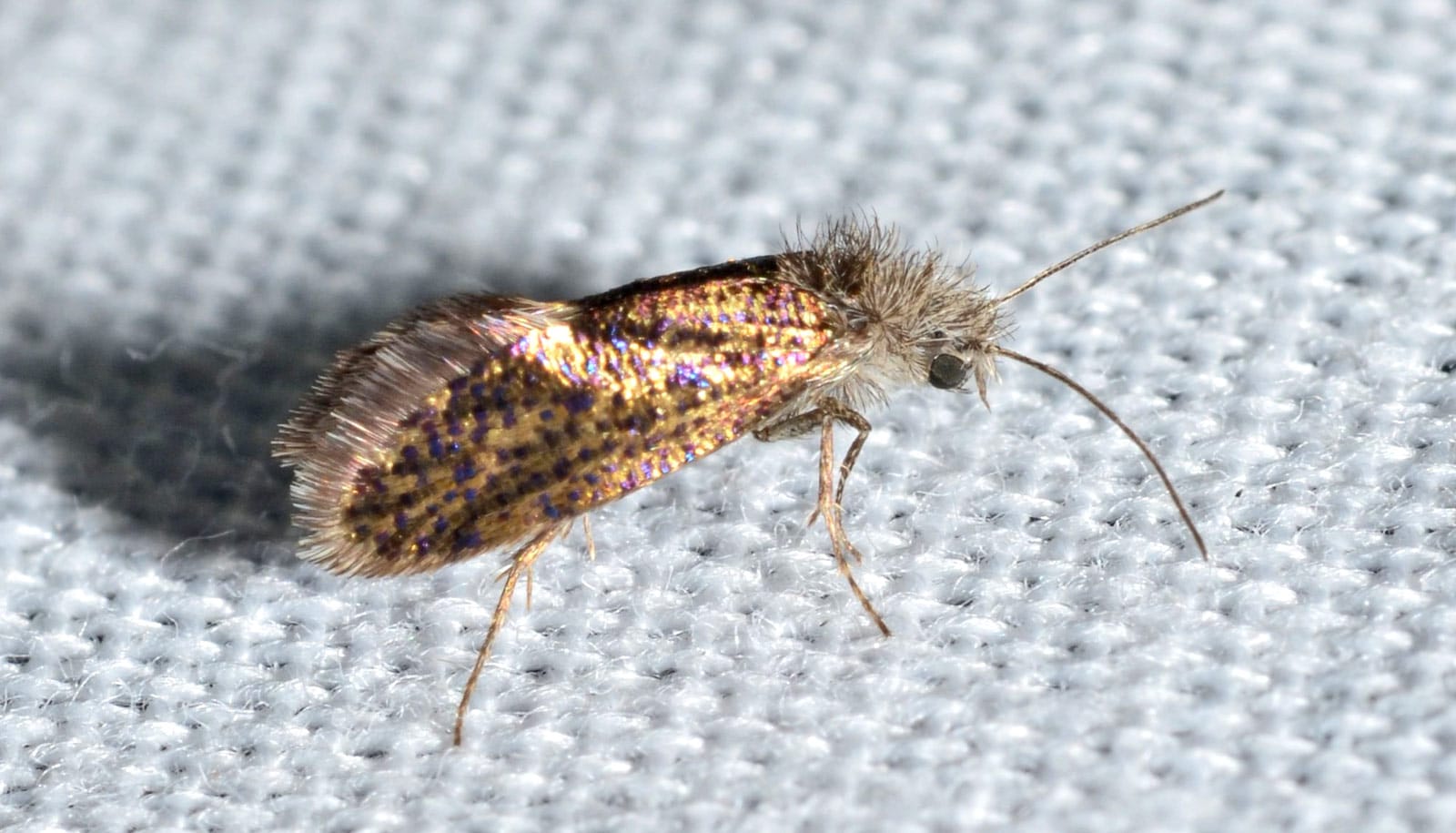 Leaf fossils bearing marks from ancient, hungry insects offer new clues to the mass extinction that wiped out the dinosaurs.

Scientists analyzed insect feeding damage to thousands of leaf fossils from Patagonia, Argentina, over the Cretaceous-Paleogene boundary, and found evidence that ecosystems there recovered twice as fast as in the United States.

The findings, published in the new journal Nature Ecology & Evolution, offer important evidence of how terrestrial ecosystems outside the US responded after an asteroid struck Chicxulub, Mexico, some 66 million years ago, marking the end of the Cretaceous period.

“Most of what we know about terrestrial recovery comes from the western interior United States, relatively close to the Chicxulub crater, which has limited our knowledge of recovery in the rest of the world,” says Michael Donovan, a doctoral student in geosciences at Penn State and lead author of the paper. “We are giving another view of what was happening during that time, far away from the impact site.”

Donovan and colleagues found leaf-mining insects completely disappeared in Patagonia during the extinction event, as previous studies show happened in the US But unlike the US, where it took 9 million years to return to pre-impact insect diversity, recovery happened in just 4 million years in Patagonia.

“Insects and plants are the most diverse multicellular organisms in the world, and they are known to respond to major environmental changes,” Donovan says. “So they make a great resource to study our past.”

The team analyzed 3,646 fossils from Patagonia searching for signs of leaf miners—insect larvae named for the type of damage they cause tunneling though leaves for food. These feeding paths, and the insects’ droppings, both create distinctive patterns and can be compared among fossils at different sites.

“Michael developed this technique of very detailed examination of leaf miners, and new methods for looking at the critical differences among these feeding trails in fossil leaves,” says Peter Wilf, professor of geosciences at Penn State and paper coauthor. “He’s teased apart this huge story from the tiny differences in how baby insects did their business in leaves that lived 66 million years ago.”

The scientists found no evidence that individual leaf miner species from the Cretaceous survived the extinction event in Patagonia, indicating the far south did not offer a refuge for the insects as Donovan’s team first hypothesized.

“There was no evidence of survival, which is similar to what I found when working on my master’s research at the Mexican Hat site in Montana,” Donovan says. “But what we do find in Patagonia is a pretty diverse group of novel leaf miners that appear much sooner than in the western US.”

The researchers suggest Patagonia’s further distance from the impact crater in Mexico and its ground zero effects could be responsible for insect diversity returning more rapidly to the southern location.

“The richness of plant-insect associations that we observed during the recovery may be a contributing factor to insect biodiversity in modern South America,” Donovan says. “We can look far into the past and see these patterns that influence life on Earth as it is today.”

Wilf says the study, the first of its kind outside the western US, can help scientists answer questions about modern global biodiversity.

“Our modern world is the legacy of this disaster,” Wilf says. “As we try to understand how today’s biodiversity evolved and why Earth’s millions of species live where they do, the global impact of this major catastrophe is a big sleeping elephant in a dark room—we can’t see much of it and just don’t know enough about it. As we turn on the lights, we see more of the elephant and understand our world better. This paper is a welcome step in that direction.”