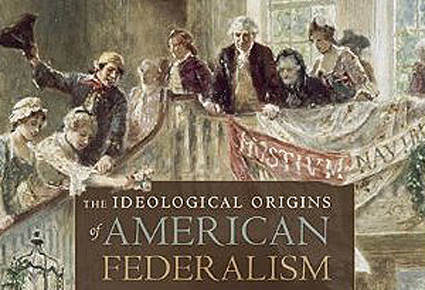 Federalism is frequently traced to the 1787 Constitutional Convention. But aw professor Alison LaCroix argues it dates back to the 1760s, when colonial legislatures worked to settle local issues without involving the British Parliament. LaCroix argues that scholars who trace federalism to that early period focus too much on the role of institutions. She calls the emergence of American federalism “one of the most important ideological developments of the period.” (Courtesy: U. Chicago)

U. CHICAGO (US)—The ongoing debates about states’ rights, from health care to gun control, tend to manipulate the meanings of federalism to suit the arguments, says a University of Chicago law professor.

Federalism, the idea of multiple layers of government working within one system, is considered a quintessentially American creation. Yet the essence of this great modern political contribution is often misunderstood, according to a new book by Alison LaCroix, assistant professor at the University of Chicago Law School.

Federalism is frequently traced to the 1787 Constitutional Convention. But LaCroix argues it dates back to the 1760s, when colonial legislatures worked to settle local issues without involving the British Parliament.

However, LaCroix argues that even the few scholars who trace federalism to that early period focus too much on the role of institutions. She contends that the emergence of American federalism was much more ideological in nature, something she calls “one of the most important ideological developments of the period.”

In her book, The Ideological Origins of American Federalism, LaCroix writes: “The core of this new federal ideology was a belief that multiple independent levels of government could legitimately exist within a single polity, and that such an arrangement was not a defect to be lamented but a virtue to be celebrated.”

Throughout this time period, the idea of multiple layers of government blossomed from a contested concept of British colonial control into a new normative vision to guide the formation of the United States.

The divergence of ideas between the British rulers and the colonists was becoming evident by the 1760s, when strong colonial resistance mounted against imperial taxations. The Stamp Act of 1765, which stated that all print material produced by colonists had to use specially stamped paper made in London, sparked a debate about Parliament’s right to impose internal taxes on the colonies and spurred radical ideas about how a government should operate.

“The passage of the Stamp Act brought into focus the recurring and fundamental constitutional question of British North American colonization: Could provinces that increasingly regarded themselves as semiautonomous claim legitimacy within the imperial structure?” writes LaCroix.

From that period onward, similar questions continued to mount in the colonies, as concrete ideas of federalism, independent of Great Britain, started to emerge.

In the wake of the Declaration of Independence in 1776 and the end of the Revolutionary War in 1783, the Founding Fathers realized they needed to come up with a coherent notion of government for their nascent nation and realized that a multilayered government was a model worth exploring.

The Constitution, drafted in 1787, enshrined the federalist ideological formation, which had been fermenting for more than two decades. In the years that followed, the ideology became more then a mere doctrine—it would be the foundation for the American political enterprise.

By 1801, President Thomas Jefferson was using references to the multilayered governmental structure as a way to unite the nation after a contentious presidential election, saying, “[We] are all republicans, we are all federalists.”

“Between the 1760s and the early 19th century, then, a loose array of Anglo-American federal ideas fused into an American ideology of federalism,” LaCroix concludes. “This ideology was larger and more profound than a constitutional doctrine or a structural principle of government. Rather, it was the frame through which Americans came to view their political and legal world, as well as the foundation of the nation itself.”