UC SANTA BARBARA (US) — Some coral reefs are able to recover from cyclones and predators because of hungry fish that chow down on threatening algae, keeping it cropped to levels low enough to allow baby coral to settle and grow.

In many cases, especially in the case of severely damaged reefs in the Caribbean, coral reefs that suffer large losses of live coral often become overgrown with algae and never return to a state where the reefs are again largely covered by live coral.

But reefs surrounding the South Pacific island of Moorea in French Polynesia that experienced large losses of live coral in the past—most recently in the early 1980s—have returned each time to a system dominated by healthy, live corals. 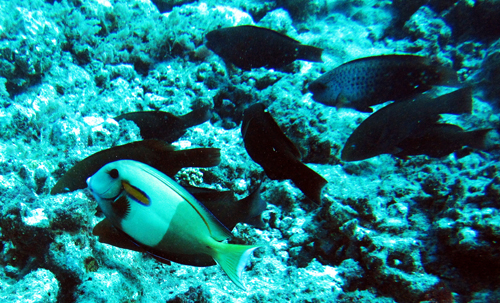 Surgeonfish and parrotfish feeding on algae on the fore reef in Moorea, French Polynesia. The algae are growing on the skeletons of corals recently consumed by crown-of-thorns sea stars. (Credit: Eric Dilly)

“We wanted to know why Moorea’s reefs seem to act differently than other reefs,” says Tom Adam, postdoctoral fellow at the University of California, Santa Barbara. “Specifically, we wanted to know what ecological factors might be responsible for the dramatic patterns of recovery observed in Moorea.”

Adam is a research associate on the Moorea Coral Reef Long-Term Ecological Research (MCR LTER) project and first author of a paper published in the journal PLoS One.

The research team was surprised by its findings. The biomass of herbivores on the reef—fish and other animals that eat plants like algae—increased dramatically following the loss of live coral.

“What was surprising to us was that the numbers of these species also increased dramatically,” says Andrew Brooks, co-author, deputy program director of MCR LTER, and associate project scientist with MSI. “We were not simply seeing a case of bigger, fatter fishes—we were seeing many more parrotfishes and surgeonfishes, all of whom happened to be bigger and fatter. We wanted to know where these new fishes were coming from.”

The researchers also found that not all of the coral reefs around Moorea were affected equally by an outbreak of predatory crown-of-thorns sea stars or by cyclones. The crown-of-thorns sea stars did eat virtually all of the live coral on the barrier reef—the reef that separates the shallow lagoons from the deeper ocean. However, neither the sea stars nor the cyclones had much impact on the corals growing on the fringing reef—the reef that grows against the island.

“We discovered that these fringing reefs act as a nursery ground for baby fishes, most notably herbivorous fishes,” says Brooks. “With more food available in the form of algae, the survivorship of these baby parrotfishes and surgeonfishes increased, providing more individuals to help control the algae on the fore reef.

“In effect, the large numbers of parrotfishes and surgeonfishes are acting like thousands of fishy lawnmowers, keeping the algae cropped down to levels low enough that there is still space for new baby corals to settle onto the reef and begin to grow.”

A major reason the reefs in the Caribbean do not recover after serious disturbances is because these reefs lack healthy populations of parrotfishes and surgeonfishes, due to the effects of overfishing, Adam says.

“Without these species to help crop the algae down, these reefs quickly become overgrown with algae, a situation that makes it very hard for corals to re-establish themselves.”

Managers have tried to reverse the trend of overfishing through the creation of Marine Protected Areas (MPAs), where fishing is severely restricted or prohibited.

“Our results suggest that this strategy may not be enough to reverse the trend of coral reefs becoming algal reefs,” says Brooks. “Our new and very novel results suggest that it also is vital to protect the fringing reefs that serve as nursery grounds. Without these nursery grounds, populations of parrotfishes and surgeonfishes can’t respond to increasing amounts of algae on the reefs by outputting more baby herbivores.”

In short, the research team found that by using MPAs, managers can help protect adult fish, producing bigger, fatter fish. “But if you don’t protect the nursery habitat—the babies produced by these bigger fish, or by fish in other, nearby areas—you can’t increase the overall numbers of the important algae-eating fish on the reef,” says Brooks.

The scientists believe that Moorea’s reefs may recover. “One final bit of good news is that we are seeing tens of thousands of baby corals, some less than a
half-inch in diameter, on the fore reefs surrounding Moorea” says Brooks.

MCR researchers will follow the coral reef recovery process over the next decade or more, in search of additional information that can aid managers of the world’s coral reefs.

Researchers from California State University-Northridge and University of California-Santa Cruz contributed to the study.