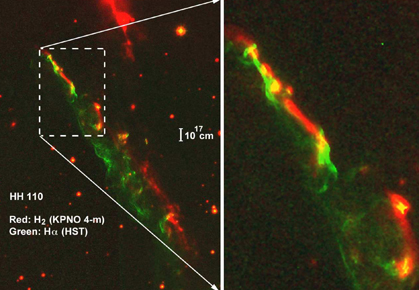 Image of the stellar jet of HH 110, which is dramatically similar to the simulations created in a lab using one of the world’s most powerful lasers. “The Omega laser let us create a tiny artificial jet and blast it into a foam cloud to see what happens. The results gave us new insights into what happens in nature on scales a trillion trillion times larger,” says Adam Frank.  (Credit: NASA)

The achievement, detailed in the current issue of the Astrophysical Journal, is the latest in a series of experiments at the University of Rochester’s Laboratory for Laser Energetics designed to recreate astronomical events in a laboratory.

The team, led by physics professor Patrick Hartigan at Rice University, used the LLE’s Omega laser, one of the most powerful lasers in the world, to reproduce the way a stellar jet behaves when it slams into giant clouds of dust and gas that exist where stars are born.

“Even 3-D computer simulations often lack the resolution to study these new aspects of stellar jet evolution properly,” says Adam Frank, professor of physics and astronomy at the University of Rochester and one of the computational scientists in the study. “The Omega laser let us create a tiny artificial jet and blast it into a foam cloud to see what happens. The results gave us new insights into what happens in nature on scales a trillion trillion times larger.”

Frank explains that stellar jets form when magnetic fields around a newly born star force matter to shoot from the star’s poles at hundreds of miles per second. This relatively simply method of creation suggests that the jets themselves should be fairly simple in shape, but stellar jets usually take on convoluted and varied shapes.

This simulation illustrates how a plasma jet driven upwards by laser (not shown) strikes spherical “cloud” and is deflected to the left. A similar situation occurs when an astrophysical jet strikes a star-forming cloud. (Credit: Bernhard Wilde)

Frank says that some of this complexity may be due to interactions with the surrounding stellar environment. In its recent experiments, the group using the Omega laser found that jets will be strongly deflected when they run into a dense cloud, creating a high-speed splatter of plasma.

For the jet-cloud experiment, the scientists at the Laboratory for Laser Energetics fired the Omega at a marble-sized piece of titanium. In just a few millionths of a second, the Omega laser released multi-trillion watt bursts of energy—more power than is in the entire electrical grid of the United States.

“The deflection and splatter we saw in the experiments showed us key features of how real astrophysical jets will respond in complicated environments,” says Frank. “But this was a really complicated experiment that could only have been done on the LLE’s Omega laser. It’s really helping us think about these jets in new ways.”

One of the novel aspects of the program was the acquisition and use of new astronomical data to compare to the simulation. “This had never been done before” says Frank.

Hartigan used high-power telescopes to get new images of Herbig Haro 110, a stellar jet hundreds of light years away, which is being deflected by a nearby star-forming cloud.

“We used those images to compare with the experiments, which then helped us think about the whole jet cloud deflection process differently,” says Frank. “This is the first time that new astrophysical data has been taken explicitly for a laboratory astrophysics experiment.”