RICE (US) — Transforming graphite oxide (GO) into a full-fledged supercapacitor turns out to be a simple process, but until recently was anything but obvious.

Researchers from Rice University discovered that by writing patterns of RGO into thin sheets of GO, they could effectively turn them into free-standing supercapacitors with the ability to store and release energy over thousands of cycles. 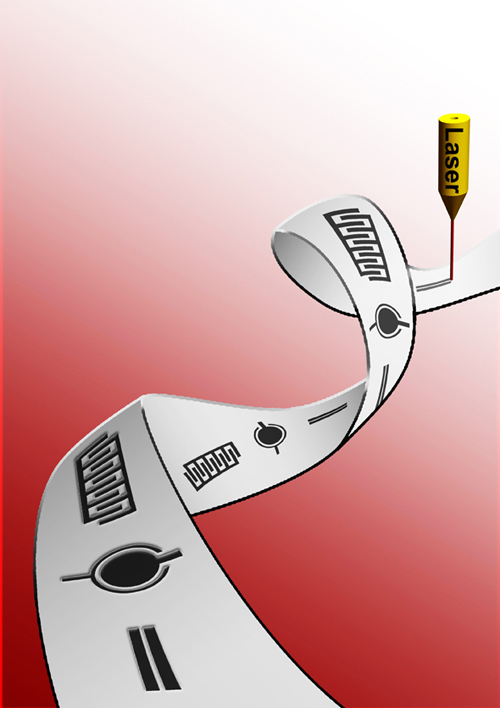 The surprising find is that when hydrated, GO can hold ions and serve as a solid electrolyte and an electrically insulating separator.

“This is quite easy, as GO soaks up water like a sponge and can hold up to 16 percent of its weight,” says Wei Gao, lead author of a paper published online in the journal Nature Nanotechnology, and a graduate student in the lab of Pulickel Ajayan, professor of mechanical engineering and materials science and chemistry.

“The fundamental breakthrough here is that GO, when it contains water, acts as an ionic conductor,” Ajayan says. “So we’re able to convert a sheet of GO into a supercapacitor without adding anything. All you need are a pattern and the electrodes, and you have a device. Of course the devices also perform in the presence of external electrolytes, which is even better.

“I think you’re going to see a lot of tiny devices that need smaller power sources. Intermediate-sized devices might also be powered by this material; it’s very scalable.”

As a control experiment, the team sucked all the water out of an RGO-GO-RGO device in a vacuum to kill its ionic conductivity. Exposing it to air for three hours completely restored its supercapacitor function, another potentially handy characteristic.

To build a fully functional supercapacitor, conducting electrode materials need to be separated by an insulator that contains the electrolyte. When laser-written patterns of conducting RGO are separated by GO, the material becomes an energy storage device, Gao says. The patterns can be layered top and bottom or on the same plane.

In experiments, heat from a laser sucked oxygen out of the surface to create the dark, porous RGO, which provided a level of resistance and restrained the GO-contained ions until their controlled release. Patterns were written in the GO with nearly one-micron accuracy.

When tested, the devices performed comparably with existing thin-film micro-supercapacitors, exhibiting proton transport characteristics similar to that of Nafion <http://en.wikipedia.org/wiki/Nafion> , a commercial electrolyte membrane discovered in the 1960s, Ajayan says.

While the lab won’t make flat supercapacitors in bulk anytime soon, the research opens the way to interesting possibilities, including devices for use in fuel cells and lithium batteries.

He said the discovery is surprising “because a lot of people have been looking at graphite oxide for five or 10 years now, and nobody has seen what we see here. We’ve discovered a fundamental mechanism of graphite oxide—an ionic conducting membrane—that is useful for applications.”

Researchers from the University of Delaware contributed to the study, that was funded by Nanoholdings LLC.