U. YORK (UK) — The consequences of overfishing have led fisheries to rely on a handful of highly valuable shellfish—but new research shows this approach is extremely risky.

Overfishing has reduced fish populations and biodiversity across much of the world’s oceans. New research, published today in Fish and Fisheries, shows that traditional fisheries targeting large predators such as cod and haddock have declined over the past hundred years.

In their place, catches of shellfish such as prawns, scallops, and lobsters have rocketed as they begin to thrive in unnaturally predator-low environments often degraded by the passage of trawls and dredges. 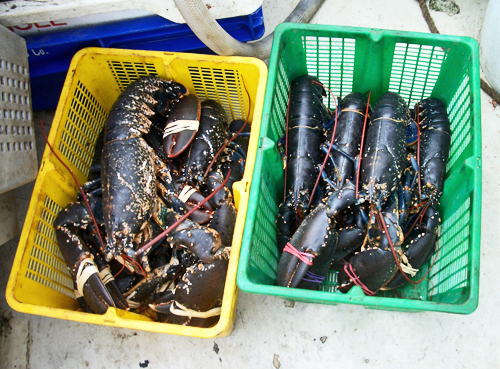 In the United States and Canada, catches of lobster, scallops, and crab have also come to dominate following the collapse of cod. (Credit: Bryce Stewart) 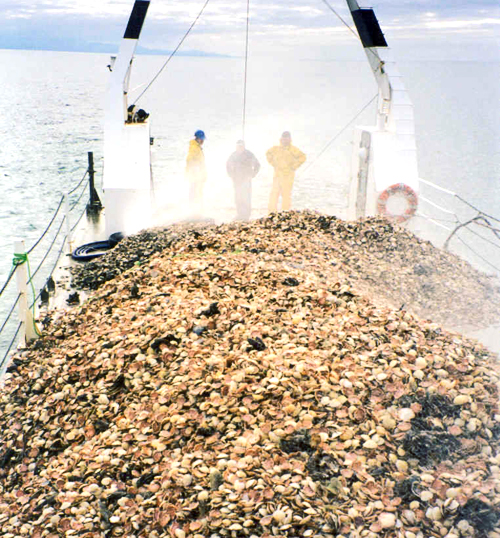 A huge catch of young scallops in New Zealand. This fishery was highly productive in the 1980s and 90s, but has now completely collapsed for unknown reasons. (Credit: Peter Duncan)

In many places, including the UK, shellfish are now the most valuable marine resource. The research by the Environment Department at York suggests that although a shellfish-dominated ecosystem appears beneficial from an economic perspective, it is highly risky.

Like simplified agricultural systems, these shellfisheries are unstable in the long-term and at great risk of collapse from disease, species invasions, and climate change. Warming and acidification of our oceans due to greenhouse gas emissions is expected to affect shellfish worst. Ocean acidification, in particular, will limit the ability of scallops and other shellfish to form proper shells, and lead to widespread mortality.

“Prawns are now the most valuable fishery in the UK, with catches currently worth over £110 million a year. But this fishery has come to exist only after we overexploited populations of cod, haddock, and other predators,” says lead author Leigh Howart.

“If shellfish now collapsed the social consequences for fishermen would be devastating. There are simply very few remaining species left to target.”

The study reports similar findings from all over the world. In the United States and Canada, catches of lobster, scallops, and crab have also come to dominate following the collapse of cod. However, disease and climate change again put these species at great risk.

While in the Black Sea, Baltic, and off the west coast of Africa, overfishing of large predators have caused the ecosystems to become overrun with jellyfish, resulting in severe oxygen depletion and eruptions of hydrogen sulphide, thereby wiping out important food chains across 100,000 square kilometers of seabed.

“Shellfish make a valuable contribution to our fisheries,” adds co-author Bryce Stewart. “But we cannot just assume everything is rosy. There is an urgent need for continued improvements in management of finfish fisheries, and an ecosystem approach which rebuilds the diversity, resilience, and productivity of our oceans into the future.”

Co-author Professor Callum Roberts concludes: “The rise of shellfish has been welcomed by many as a lifeline for the fishing industry. However, such changes are not a result of successful management, but rather a result of management failure, a failure to protect stocks and their habitats in the face of industry innovation and overfishing.

“This study highlights why the UK needs to urgently act to protect our seas. We need more marine protected areas to stop our seas from becoming a wasteland and to restore the diversity and productivity of fisheries well into the future.” 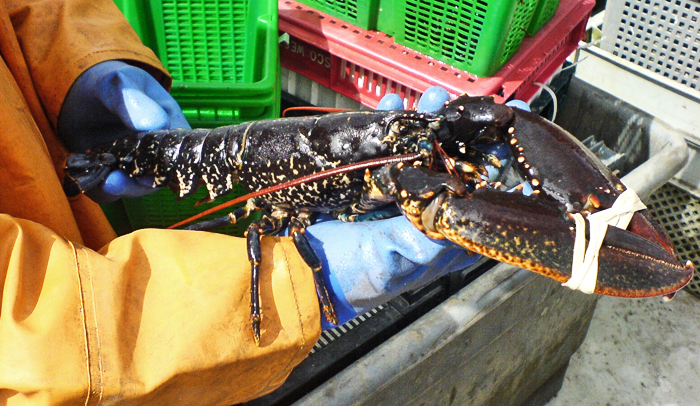 Lobsters are a highly valuable species in both the UK and North America. (Credit: Bryce Stewart)

Warming oceans will be extra hard on big fish

Bumble bees in places with fewer flowers are sicker