U. WASHINGTON (US) — A suffocating fungus that threatens amphibians around the world has skipped over the diverse frog population in West Africa.

Amphibians are one of the most threatened animal groups in the world; almost one third of all species are under acute threat. One of the main reasons for their decline is a chytrid fungus (Batrachochytrium dendrobatidis) with a nearly worldwide distribution.

In a collaborative effort involving scientists around the globe, close to 1,000 amphibians belonging to over 60 species were tested for the disease. The findings were published recently in the journal PLOS ONE. 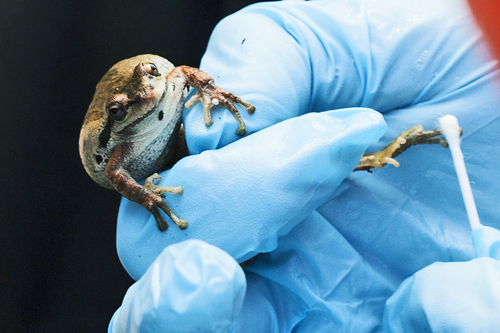 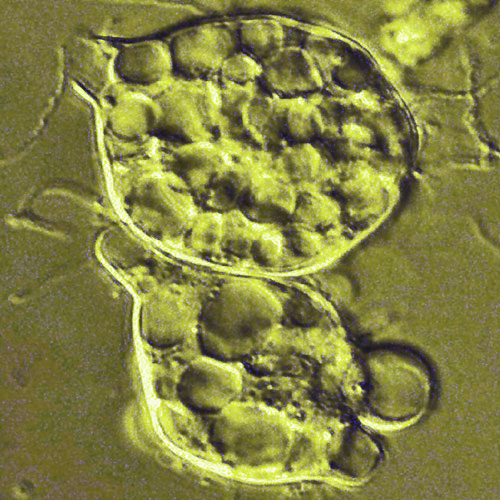 Almost one third of all amphibian species are under acute threat. One of the main reasons for their decline is a chytrid fungus (Batrachochytrium dendrobatidis) with a nearly worldwide distribution. (Credit: AJ Cann/Flickr)

Two co-authors of the study, the University of Washington’s Burke Museum Curator of Herpetology Adam Leaché and biology graduate student Matt McElroy, traveled to Ghana in 2011 to collect specimens for the project.

Chytridiomycosis, the disease caused by the fungus, is known to be highly lethal to frogs and is believed to be responsible for the worldwide amphibian decline. In infected animals, the fungus attacks the skin and blocks respiration, eventually causing death.

Chytrid is widespread in Africa, and every year new positive records are reported from countries in southern, eastern, and central Africa. The current study by an international team of biologists and herpetologists did not detect chytrid in West Africa despite extensive tests of 62 species from seven countries.

This is especially remarkable because environmental factors clearly show the fungus would find suitable conditions in West Africa.

One hypothesis is that the chytrid fungus originated in Africa and dispersed globally via the pet trade. This makes the study’s finding—that chytrid is not present in West Africa—all the more unusual and interesting.

The researchers used both genetic and histological tests to analyze the samples collected from the field. The consistently negative (chytrid-free) results stand in stark contrast to what models of environmental parameters might predict.

One explanation for this incongruence, according to Johannes Penner, the lead author on the study, is the Dahomey Gap; an arid region in Togo and Benin that naturally divides the rain forests in West Africa from Central Africa and in turn acts as a natural barrier for the dispersal of the fungus.

“Chytrid is having negative impacts on amphibian communities on a global scale, and our study provides hope that at least one highly diverse region of Africa may remain unaffected by this pathogen,” Leaché says.

It now appears that West Africa is the last tropical region beside Madagascar where chytrid does not exist, potentially sparing West Africa from the great amphibian decline affecting the rest of the world.

Unfortunately, according to many experts, destruction of natural habitats, which happen on a large scale in West Africa, can easily rival the devastation of even chytrid.

To prevent chytrid from spreading into West Africa via the trade of frogs for the food market, the researchers suggest various precautionary measures. For example, the transport of potentially infected materials between the regions should be controlled and materials prophylactically disinfected.

In addition, an early warning system would be useful to detect the appearance of the fungus in Ghana, a potential entry point. These actions could eliminate a significant threat to the amphibians of West Africa, and be utilized by conservationists to help other amphibian populations across the globe.