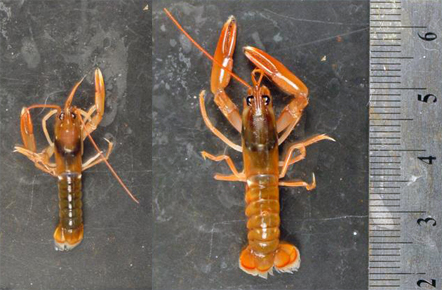 American lobster reared for 60 days at normal levels of CO2 (left) and under high levels of CO2 (2850 ppm). “There is no magic formula to predict how different species will respond, but one thing you can be sure of is that ecosystems as a whole will change because of these varied individual responses,” Justin Ries predicts. (Credit: Justin Ries/UNC-Chapel Hill)

The findings could have important implications for ocean food webs and the multibillion dollar global market for shellfish and crustaceans.

Previous research had indicated that an increase in ocean acidity would be bad news for all such creatures, even going so far as to slow growth and even dissolve their shells.

The findings, based on research by Justin Ries, assistant professor of marine sciences at the University of North Carolina at Chapel Hill, suggest that sediment-dwelling marine organisms may exhibit a wider range of responses to CO2-induced acidification than previously thought—some may get weaker while others become stronger.

Such changes could have serious ramifications for predator and prey relationships that have evolved over hundreds of millions of years, says Ries.

“There is no magic formula to predict how different species will respond, but one thing you can be sure of is that ecosystems as a whole will change because of these varied individual responses,” Ries predicts.

Researchers grew 18 different species of economically and ecologically important marine calcifiers (creatures that make their shells out of calcium carbonate) at various levels of CO2 predicted to occur over the next several centuries.

When CO2 combines with water, it produces carbonic acid, raising the overall amount of carbon in seawater but reducing the amount of the carbonate ion used by organisms in their calcification.

“Shelled marine organisms need carbonate ions to build their shells that protect them from the intense predation that defines everyday life on the shallow sea floor,” Ries explains.

Ries said the varied responses may reflect differences in organisms’ ability to regulate pH levels at their sites of calcification; their ability to generate a protective organic layer that limits their exposure to surrounding seawater; whether they use more soluble forms of calcium carbonate in their shells; and their ability to utilize CO2 directly via photosynthesis.

Researchers from the Woods Hole Oceanographic Institution in Massachusetts contributed to the study, which was published in the December issue of Geology.