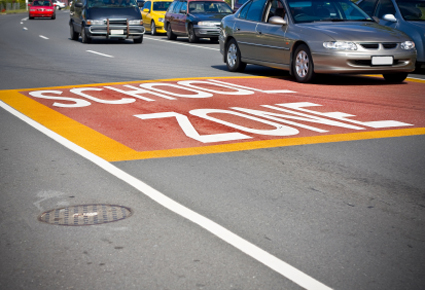 Although most children spend less time at school than at home, school activities may increase ventilation rates and the dose of pollutants getting into the lungs, according to a new study. “Exposure to pollution at locations other than home, especially where children spend a large portion of their day and may engage in physical activity, appears to influence asthma risk as well,” says Rob McConnell. (Courtesy: iStockphoto)

USC (US)—Children attending schools located in high-traffic zones have a 45 percent increased risk of developing asthma, even though time spent at school only accounts for about one-third of a child’s waking hours, according to new research.

Asthma is the most common chronic childhood illness in developed countries and has been linked to environmental factors such as traffic-related air pollution.

“While residential traffic-related pollution has been associated with asthma, there has been little study of the effects of traffic exposure at school on new onset asthma,” says Rob McConnell, professor of preventive medicine at USC’s Keck School of Medicine.

“Exposure to pollution at locations other than home, especially where children spend a large portion of their day and may engage in physical activity, appears to influence asthma risk as well.”

The study appears online in the journal Environmental Health Perspectives.

The study drew upon data from the Children’s Health Study (CHS), a longitudinal study of children in Southern California communities that was designed to investigate the chronic effects of air pollution on respiratory health.

Using a cohort of 2,497 kindergarten and first grade children who were asthma-free when they entered the study, researchers examined the relationship of local traffic around schools and homes to diagnosis new onset asthma that occurred during three years of follow-up.

Traffic-related pollution exposure was assessed based on a model that took into account traffic volume, distance to major roadways from home and school and local weather conditions.

Regional ambient ozone, nitrogen dioxide and particulate matter were measured continuously at one central site in each of the 13 study communities. The design allowed investigators to examine the joint effects of local traffic-related pollution exposure at school and at home and of regional pollution exposure affecting the entire community.

Researchers found 120 cases of new asthma. The risk associated with traffic-related pollution exposure at schools was almost as high as for residential exposure, and combined exposure accounting for time spent at home and at school had a slightly larger effect.

Although children spend less time at school than at home, physical education, and other activities that take place at school may increase ventilation rates and the dose of pollutants getting into the lungs, McConnell notes. Traffic-related pollutant levels may also be higher during the morning hours when children are arriving at school.

Despite a state law that prohibits school districts from building campuses within 500 feet of a freeway, many Southern California schools are located near high-traffic areas, including busy surface streets.

“It’s important to understand how these micro-environments where children spent a lot of their time outside of the home are impacting their health,” McConnell says. “Policies that reduce exposure to high-traffic environments may help to prevent this disease.”

The study was funded by grants from the National Institute of Environmental Health Sciences, the U.S. Environmental Protection Agency, the South Coast Air Quality Management District, and the Hastings Foundation.

Deep breath video can calm a child in 1 minute