STANFORD (US) —When resources are scarce, some male bull elephants band together into a social group with a clearly defined hierarchy, much the way females do, a new study shows.

“This is the first time this social structure has been documented in male elephants,” says Caitlin O’Connell-Rodwell, an ecologist at Stanford University. “What is also really striking is that in wet years, when there are a lot of resources, the whole thing collapses and you don’t have this linear hierarchy.” 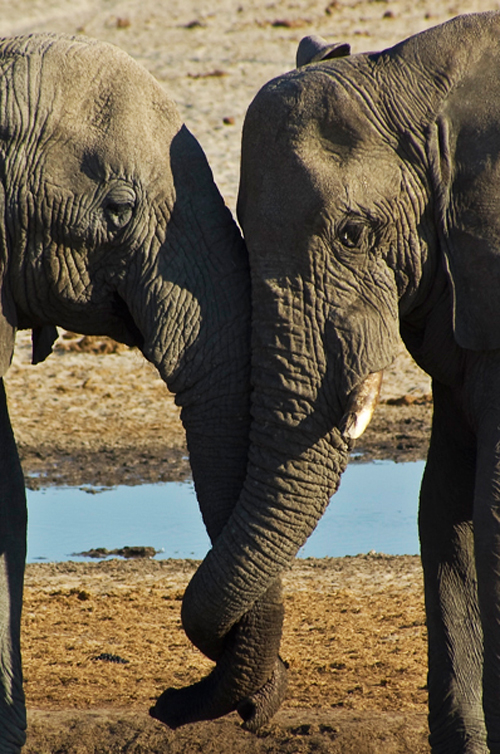 Low-ranking bulls wrap trunks in a bonding moment during the dry year of 2007. (Credit: Caitlin O’Connell and Timothy Rodwell)

The group resurrects itself when another dry year rolls around, with each individual resuming the place he held in the hierarchy during the previous dry spell.

Social animals are thought to form linear hierarchies—in which each individual occupies its own rung on the ladder and the most dominant one sits at the top—to minimize conflict over resources. A clear pecking order among animals is believed to reduce the amount of energy squandered in squabbling, thereby enhancing everyone’s chance of survival.

The study, published in Ethology Ecology & Evolution, was conducted in the semi-desert environment of Etosha National Park in Namibia during the dry seasons of four consecutive years. Starting in 2005, the researchers observed all activity—day and night—at a remote waterhole in an area closed to tourists.

Each night groups of female elephants came to drink, while the days belonged to the males.

“Because the females come at night, when there is a greater danger from lions, they tend to be nervous and don’t spend much time at the waterhole,” O’Connell-Rodwell says.

But the bulls—like males of a certain hominid species tend to do—spend a lot of time hanging out by the old watering hole.

“They spend hours there during the day and you can really get a sense of their social structure.  Plus, the same ones come back every year, so you get a good idea of the stability of these hierarchies.”

In the course of the study, the team observed more than 150 different bulls at the waterhole.  During the first year, which was drier than normal for the area, they noticed a dozen males of different ages, who consistently arrived in a group. Usually they trooped up to the waterhole in single file.

The dominant bull, christened Greg, always led the way both coming and going. If the line was not ordered by rank when they emerged into the clearing around the waterhole, it usually fell into the consistent ranked order as the elephants neared the water.

The following year, Etosha experienced its greatest rainfall in 30 years, resulting in a larger than normal number of watering holes available during the dry season. The group structure seen the previous year was never observed in 2006. Two or three bulls would come in together, but never a procession of eight to 12.

The pecking order was similar to the previous year—as evidenced by which bulls asserted dominance over which other bulls in one-on-one encounters—but more challenges were observed.

In 2007, a dry year, the researchers saw the same hierarchy they had observed in 2005 appear again and persist throughout the dry season.

“That pattern of conditions showed us the kinds of behavior that can happen at the extremes, where much more aggression was observed in wet years and more affiliative behaviors in dry years.”

Previous studies showing that bulls tend to be loners may have been because they were conducted in wetter locales, where competition for water never reaches the intensity seen in Etosha.

“In a very dry climate such as you have in Namibia, the social structure is very different from, for example, Amboseli National Park in Kenya, where rivers flow year-round,” she says.

“There each bull tends to have one close buddy, not three to five, or even seven consistently close buddies like we see at our field site in Etosha.”

Even in the semi-desert of Etosha, not every bull that came to the waterhole joined the hierarchy. Some bulls visit the site that clearly knew the bulls in the group and interacted with them, but came and went alone. Such “satellite” bulls were the exception, not the norm.

There was occasional testing of the order in the hierarchy of the group, particularly in the middle and lower ranks, where younger bulls are seeking to move up.  But overall, the pecking order held.

It’s difficult to project how stable the hierarchies are likely to be in the long term, as droughts in Africa tend to run in 10 to 20 year cycles, says O’Connell-Rodwell.

The behavioral changes of the younger bulls suggest that being part of a structured hierarchy with mature males might help moderate younger males’ aggressive behavior. That pattern has implications for the health of other male societies, including humans.

Robert Sapolsky, professor of biology at Stanford, is a coauthor of the study, which received funding from Utopia Scientific, the Oakland Zoo, the Scheide Fund, and Stanford University.