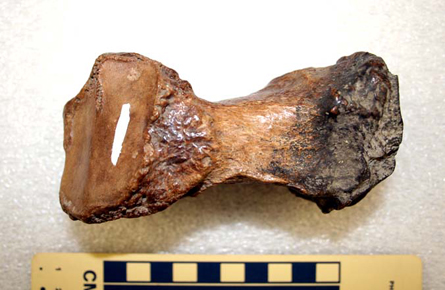 This bone from an Ice Age sloth is the first of its kind found in Iowa.

U. IOWA (US)—Researchers excavating a site in southwestern Iowa have discovered a bone from a type of giant Ice Age sloth never before recorded in the state.

The five-inch long bone, from a Paramylodon harlani, was originally misidentified as a Megalonyx jeffersonii sloth, three of which—an adult, a toddler, and a baby—have been uncovered at the site.

Greg McDonald, the senior curator of natural history for the National Park Service’s Park Museum Management Program, is a consultant on the Tarkio Valley Sloth Project, which is sponsored by the University of Iowa’s Museum of Natural History. McDonald identified the bone, which was discovered two years ago, as the animal’s fifth metacarpal—once connecting its wrist to its little finger—during a visit to the museum.

“Greg saw that bone, and you could see his face light up,” says Holmes Semken, project leader and emeritus professor in the University of Iowa’s Department of Geoscience.

Both Paramylodon and Megalonyx were nearly elephant-sized Ice Age mammals that became extinct about 12,000 years ago. But Paramylodon sloths were equipped with broader, triangular claws for digging rather than the sharp claws of the Megalonyx, which were used for grabbing at woody vegetation like tree branches, McDonald says.

McDonald, whose recent visit to the University of Iowa was made possible by a National Science Foundation grant, checked all the bone identifications as part of his analysis. He says his goal was to establish an accurate catalog of the bones as a basis for further investigations.

“Of all of the Megalonyx sites discovered, the Tarkio specimens will provide the basis for the most comprehensive analysis of sloth paleobiology and ecology of any to date,” McDonald adds.

The new sloth identification comes on the heels another major excavation discovery at the original site: On April 25, three more major Megalonyx bones were discovered. Semken and David Brenzel, another primary investigator for the project, identified the findings on site as a scapula (shoulder blade) from the baby sloth—only the second recovery from this specimen—and two rib bones from the older toddler sloth.

“We have a nearly complete rib cage now for the juvenile sloth,” Semken says, adding that the baby sloth scapulas are among the animals’ most fragile bones. “Someone a lot smarter than me is going to have to figure out how these bones have managed to survive virtually unblemished while the more robust limb bones appear to be missing.”

The recent bone discoveries are the first in nearly three years for the project, which began in 2001. Semken says the group’s excavation efforts were halted in 2007 and 2008 because of flooding, and the excavation last December turned up empty-handed.

“We were concerned that the fossil deposit was running out after the disappointing results from the dig in December, but it’s clear that we have encountered the bone bed again,” Semken adds. “Discovering these bones was a thrill for everyone. We plan to get back out there as soon as the water in the river goes down, hopefully this month or the next. We have a lot more sloth to find.”

McDonald estimates that the approximately 110 bones recovered from the adult Megalonyx represent about 60 percent of the full skeleton, making it the second most complete of its kind. Only six other semi-complete skeletons of this species have ever been found, none of which are associated with younger animals. The older juvenile is also the second most complete of its kind, with more than 40 bones recovered. The skeletons have the added research benefit of being buried in sediments that will provide valuable environmental data about the climate and ecology during the sloths’ lives.

To get airborne, giant pterosaur took an 8-foot leap