YALE / U. ARIZONA (US) — When it comes to obesity, taking in too many calories far outweighs getting too little exercise, according to a study of a hunter-gatherer society in Tanzania.

Yale University anthropologist Brian Wood and co-authors Herman Pontzer of Hunter College and David Raichlen of University of Arizona used state-of-the-art technology to measure the daily energetic expenditure of the Hazda, a foraging people of Tanzania. 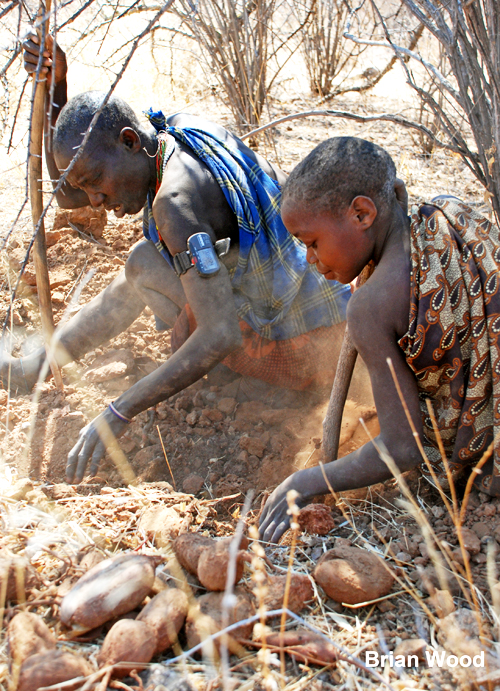 Members of the Hadza culture of Tanzania dig for tubers. (Credit: Brian Wood)

As reported in PLoS One, they discovered that even though these last remaining hunter-gatherers in Africa are quite physically active, they expend on average no more calories in a day than the adult population of the industrialized world.

Given the total lack of obesity among the Hadza, whose average daily calorie consumption is far lower than that found in the developed world, the researchers conclude that increased caloric intake is the main source of rising obesity in Western populations.

The finding that energetic expenditure is more similar across a broad range of cultures than previously assumed challenges the widely held belief that a recent shift to a more sedentary lifestyle is largely responsible for the worldwide obesity pandemic, note the researchers.

“This was one of those ‘a-ha’ moments in evolutionary science, when testing our assumptions about other cultures teaches us something about ourselves,” Wood says.

The counter-intuitive finding has huge evolutionary implications, contends Wood, who says that our evolved preference for energy-dense foods poses risks as such foods become increasingly easy to acquire.

“Ultra-convenient, modern food markets are novel in an evolutionary sense, and today we might get pleasure from a diet that over-supplies us with calories,” he notes.

He cautions that these findings are not to be read as reason to abandon physical exercise. “Numerous studies demonstrate that physical exercise is beneficial in many ways to human health,” he notes. “While our study would certainly recommend increased focus on one’s food intake, it in no way supports canceling your gym membership.”

Other authors of the study are Audax Z. P. Mabulla, Susan B. Racette, and Frank W. Marlowe.

Dairy cows have it worse than beef cows

Emergency programs provided kids with 1.5B meals a month in 2020