Scientists are testing captive and wild manatees for heart problems using a table built to hold the heavy animals.

“Due to their current endangered status, it is important that we understand the animal in its entirety so that we can better tailor conservation efforts for the species,” says Trevor Gerlach, an intern in the aquatic animal health program at the University of Florida.

The long-term goal is to provide practitioners at rehabilitation facilities and those working in the field with data from clinically healthy animals. Such animals could be compared to animals of concern to determine if cardiac disease is present. 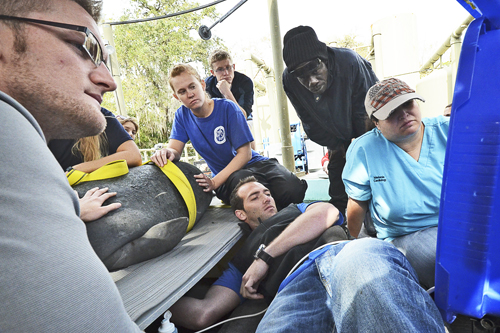 Trevor Gerlach, left, watches the results of a cardiac ultrasound (echocardiogram) on a computer monitor while Ivan Sosa performs an echocardiogram on a sub-adult manatee. (Credit: Lowry Park Zoo)

To allow for effective testing, the researchers first developed the table built to hold the weight of the animals that were part of a large-scale manatee health assessment conducted by the US Geological Survey.

“We were able to clearly visualize all valves and chambers,” Gerlach says, adding that other key indicators of heart function also were successfully obtained. Some abnormalities in the study animals also were documented.

“Our results indicate that echocardiography in the Florida manatee is possible, which has both clinical and research implications in larger epidemiologic studies evaluating diseases of the cardiopulmonary and cardiovascular systems,” he says.

The findings are published in the June issue of the Journal of Zoo and Wildlife Medicine.

Although extensive research has been conducted on comparative anatomy, physiology and ecology of sea cows, very few studies have evaluated the manatee heart. Basic cardiac morphology and electrocardiograms have been examined, but the diagnostic value is limited to electrical imbalances in the heart.

“Echocardiography is the gold standard for diagnosing valve diseases and structural abnormalities, and provides other information as well,” Gerlach says.

Researchers are finishing up the second phase of the study, which includes collecting more data from echocardiographs to establish normal testing parameters for manatees of various ages.

“Once we establish the parameters, we can begin larger epidemiological studies on the prevalence of heart disease in the wild population, which is one of our long-term goals,” Gerlach says.

“Out-of-water, real-time assessment of these large aquatic mammals will benefit our evaluation of manatee health-related indices in the wild population,”  says Bob Bonde, a manatee researcher with the US Geological Survey.

“Knowledge of manatee reproductive fitness and nutritional condition is paramount to our fully understanding their recovery.”