U. SHEFFIELD (UK) — Unusual changes in the jet stream caused the exceptional surface melt of the Greenland ice sheet in 2012, but it’s too early to tell if it was a rare event or a sign of significant change.

Researchers used a computer model simulation, SnowModel, and satellite data to confirm a record surface melting of the Greenland ice sheet (GrIS) for at least the last 50 years—when by July 2012, more than 90 percent of the ice-sheet surface melted. This far exceeded the previous surface melt extent record of 52 percent in 2010. 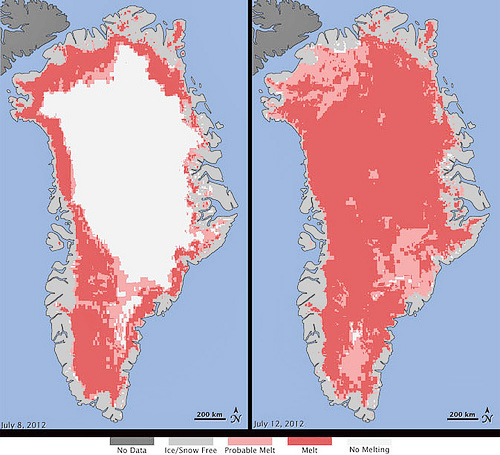 Extent of surface melt over Greenland’s ice sheet on July 8 (left) and July 12 (right). Measurements from three satellites showed that on July 8, about 40 percent of the ice sheet had undergone thawing at or near the surface. In just a few days, the melting had dramatically accelerated and an estimated 97 percent of the ice sheet surface had thawed by July 12. (Credit: Nicolo E. DiGirolamo, SSAI/NASA GSFC, and Jesse Allen, NASA Earth Observatory via Flickr)

The team also analyzed weather station data from on top of and around the GrIS, largely collected by the Danish Meteorological Institute but also by US programs, which showed that several new high Greenland temperature records were set in summer 2012.

The findings, published in the International Journal of Climatology, clearly demonstrates that the record surface melting of the GrIS was mainly caused by highly unusual atmospheric circulation and jet stream changes, which were also responsible for last summer’s unusually wet weather in England.

The analysis shows that ocean temperatures and Arctic sea-ice cover were relatively unimportant factors in causing the extra Greenland melt.

“The GrIS is a highly sensitive indicator of regional and global climate change, and has been undergoing rapid warming and mass loss during the last 5-20 years. Much attention has been given to the NASA announcement of record surface melting of the GrIS in mid-July 2012. This event was unprecedented in the satellite record of observations dating back to the 1970s and probably unlikely to have occurred previously for well over a century,” says study leader Edward Hanna, a professor in the University of Sheffield’s geography department.

“Our research found that a ‘heat dome’ of warm southerly winds over the ice sheet led to widespread surface melting. These jet stream changes over Greenland do not seem to be well captured in the latest Intergovernmental Panel on Climate Change (IPCC) computer model predictions of climate change, and this may indicate a deficiency in these models,” explains Hanna.

“According to our current understanding, the unusual atmospheric circulation and consequent warm conditions of summer 2012 do not appear to be climatically representative of future ‘average’ summers predicted later this century.

“The next 5 to 10 years will reveal whether or not 2012 was a rare event resulting from the natural variability of the NAO or part of an emerging pattern of new extreme high melt years. Because such atmospheric, and resulting GrIS surface climate, changes are not well projected by the current generation of global climate models, it is currently very hard to predict future changes in Greenland climate.”

“Yet,” Hanna points out, “it is crucial to understand such changes much better if we are to have any hope of reliably predicting future changes in GrIS mass balance, which is likely to be a dominant contributor to global sea-level change over the next 100-1000 years.”