INDIANA U. (US) — After playing violent video games for one week, young adult men showed signs of sustained changes in a region of the brain associated with emotional control, a new study shows.

This is the first time researchers at Indiana University—a group that has studied the effects of media violence for more than a decade—have conducted an experimental study that showed a direct relationship between playing violent video games over an extended period of time and a subsequent change in brain regions associated with cognitive function and emotional control.

The controversy over whether or not violent video games are potentially harmful to players has been debated for many years, even making it as far as the Supreme Court in 2010. There has been little scientific evidence demonstrating that the games have a prolonged negative neurological effect. 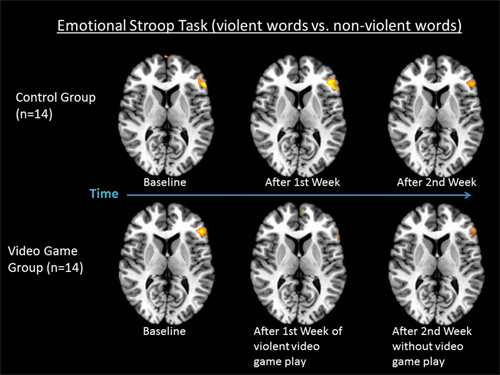 “For the first time, we have found that a sample of randomly assigned young adults showed less activation in certain frontal brain regions following a week of playing violent video games at home,” says Yang Wang, assistant research professor of radiology and imaging sciences. “The affected brain regions are important for controlling emotion and aggressive behavior.”

For the study, 28 healthy adult males, age 18 to 29, with low past exposure to violent video games were randomly assigned to two groups of 14. Members of the first group were instructed to play a shooting video game for 10 hours at home for one week and refrain from playing the following week. The second group did not play a video game at all during the two-week period.

Each of the 28 men underwent functional magnetic resonance imaging (fMRI) analysis at the beginning of the study, with follow-up exams at one and two weeks. During fMRI, the participants completed an emotional interference task, pressing buttons according to the color of visually presented words.

After the video game group refrained from game play for an additional week, the changes to the executive regions of the brain returned closer to the control group, say the researchers, who presented their findings at the annual meeting of the Radiological Society of North America.

“These findings indicate that violent video game play has a long-term effect on brain functioning,” says Wang. “These effects may translate into behavioral changes over longer periods of game play.”

Wang says that another important point of the study was that the young men were supplied with laptop computers and played at home in their “natural environment.” Some of the previous research was done with players participating in a lab setting.

The research is supported by the Center for Successful Parenting.

Buffalo shooting adds to rise of hate crimes in the US