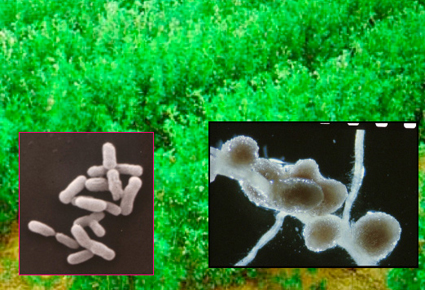 Bacteria (left) and the root nodules (right) in which they reside as they fix nitrogen inside barrel matic, a leguminous forage crop similar to fellow legume alfalfa, shown in the field in the background. Researchers have discovered a plant gene that triggers a critical chemical signal. Without it, nitrogen doesn’t get fixed by the bacteria. (Courtesy: Stanford)

STANFORD (US)—Nitrogen-producing bacteria living inside legumes, such as soybeans, could blunt the negative effects of fertilizer and aid efforts to make agriculture more sustainable.

Excess nitrogen from fertilizer runoff into rivers and lakes causes algal blooms that create oxygen-depleted dead zones, such as the 6,000 to 7,000 square mile zone in the Gulf of Mexico. In addition, nitrogen in the form of nitrous oxide is a potent greenhouse gas.

“We have discovered a new biological process, by which leguminous plants control behavior of symbiotic bacteria,” says Sharon Long, professor of biology at Stanford University. “These plants have a specialized protein processing system that generates specific protein signals. These were hitherto unknown, but it turns out they are critical to cause nitrogen fixation.”

The ability of legumes to capture nitrogen from the air and turn it into plant food, or “fix” it, also leaves the soil enriched through the plant matter left after harvesting, creating a natural fertilizer for other crops, which is the basis for crop rotation.

Long’s research group discovered a plant gene that triggers a critical chemical signal. Without it, nitrogen doesn’t get fixed by the bacteria.

Dong Wang, a postdoctoral scholar in Long’s lab who pinned down the gene, is first author of a paper describing the work, published in Science.

The beneficial bacteria reside inside the nodules of legumes such as peas, beans, alfalfa and clover, where they pluck molecules of nitrogen from air in the soil and turn it into ammonia, which feeds the plant.

Only bacteria that contain a special enzyme are capable of this sort of “nitrogen fixing.” All other plants have to get their nutrients from using already fixed nitrogen in the soil. This ability allows legumes to flourish in nitrogen-poor soils, whereas other plants require applications of manufactured nitrogen fertilizer to grow well. But even legumes can’t flourish without the right symbiotic bacteria.

“When you deal with a natural soil, you are dealing with a lot of complexity. Everything we learn about what makes symbiosis work gives us a tool to understand why, sometimes, symbiosis fails,” Long says.

“Plant breeders who are trying to help develop better-adapted plants can now analyze traits such as this. We’ve given them a new tool.”

The more efficient that legumes can be made and the wider the range of environments they can thrive in, the more they can help reduce the need for chemical nitrogen that runs off into water or sinks into the groundwater or decomposes into a gaseous form, Long says.

Long’s team worked with a legume called barrel medic, a forage plant similar to alfalfa. They tracked down the newly discovered gene by studying mutant plants that were failing to produce healthy nodules on their roots.

While bacteria inside normal nodules will thrive, in the defective nodules of this plant those bacteria can’t provide the benefit they are wired to deliver. The mutant “contained perfectly good bacteria, but was making these lousy nodules,” Long explains.

The mutant plants generated the proper precursor to the protein needed to nudge the bacteria into fixing nitrogen. But the critical enzyme for processing that precursor into the final signal was missing. So the bacteria simply sat, the nodules didn’t develop and no nitrogen got fixed.

By comparing the genome of the mutant plants with normal plants, the group found a gene that was missing from the mutants. Suspecting that gene might be the culprit, the researchers took a functional version of the gene from normal plants and put it into the mutants. The mutant legumes then began fixing nitrogen the same as normal ones, “proving that we found the right gene,” explains Wang.

Since 1960, the use of nitrogen fertilizer in the United States has roughly quadrupled, as has the price per ton, according to the U.S. Department of Agriculture. Prices have been driven up by the rising cost of natural gas used to manufacture the fertilizer.

“That might make things more expensive for American farmers and increase food prices for consumers, but this is going to wipe out people in developing countries, whose soils are perhaps most in need of fertilizers,” Long says. “This is a crucial issue. And nitrogen fixation is a key to sustainability.”

With the planet’s ever-growing population, Long said there is going to be increased need to keep productivity going on lands that are starting to become marginal because of drought, temperature, or salinity problems, among others.

“The rhizobium bacteria are a critical partner in whether that kind of extension of serviceable land can occur,” she says.

“In order for us to take existing symbioses and help make them better, optimize them for being productive even when conditions start to deteriorate, tools such as understanding how to improve nitrogen fixing in legumes are crucial.”

Researchers at Brigham Young University and the University of Minnesota contributed to the paper, which was funded by the Howard Hughes Medical Institute, the Helen Hay Whitney Foundation and the National Science Foundation.