After 50 charge-discharge cycles, the proof-of-concept units retained a capacity that was still more than double that of the graphite currently used for LI battery anodes. The findings are detailed in a study published in the journal ACS Nano. 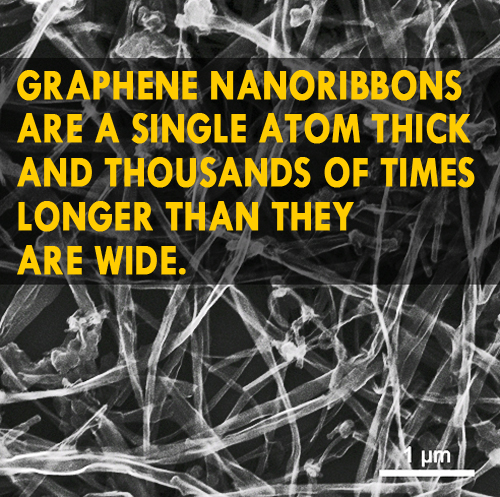 Long ribbons of carbon that are only one atom thick may help improve lithium ion batteries, according to researchers at Rice University. They combined the nanoribbons with tin oxide nanoparticles to make high-capacity anodes. (Credit: Tour Group/Rice University)

One area ripe for improvement is the humble battery. In an increasingly mobile world, battery capacity is becoming a bottleneck that generally limits devices to less than a day’s worth of use.

In the new experiments, the Rice lab mixed graphene nanoribbons and tin oxide particles about 10 nanometers wide in a slurry with a cellulose gum binder and a bit of water, spread it on a current collector and encased it in a button-style battery.

GNRs are a single atom thick and thousands of times longer than they are wide. The GNRs not only separate and support the tin oxide but also help deliver lithium ions to the nanoparticles.

“It took about two months to go through 50 cycles,” says lead author Jian Lin, a postdoctoral researcher at Rice, who believes it could handle many more without losing significant capacity.

GNRs could also help overcome a prime difficulty with LI battery development. Lithium ions tend to expand the material they inhabit, and the material contracts when they’re pulled away. Over time, materials like silicon, which shows extraordinary capacity for lithium, break down and lose their ability to store ions.

Other labs at Rice have made breakthroughs that help solve the expansion problem by breaking treated silicon into a powder, achieving great capacity and many cycles.

The researchers point out the work is a “starting point for exploring the composites made from GNRs and other transition metal oxides for lithium storage applications.”

Lin says the lab plans to build batteries with other metallic nanoparticles to test their cycling and storage capacities.

Boeing, the Air Force Office of Scientific Research, Sandia National Laboratory, and the Office of Naval Research supported the research.