"First, I was surprised that the external skull measurements did not accurately predict the actual endocranial volumes," says Corina Logan. "But I was also surprised that there was so much variation, particularly in males." Above, a grackle skull. (Credit: Sonia Fernandez) 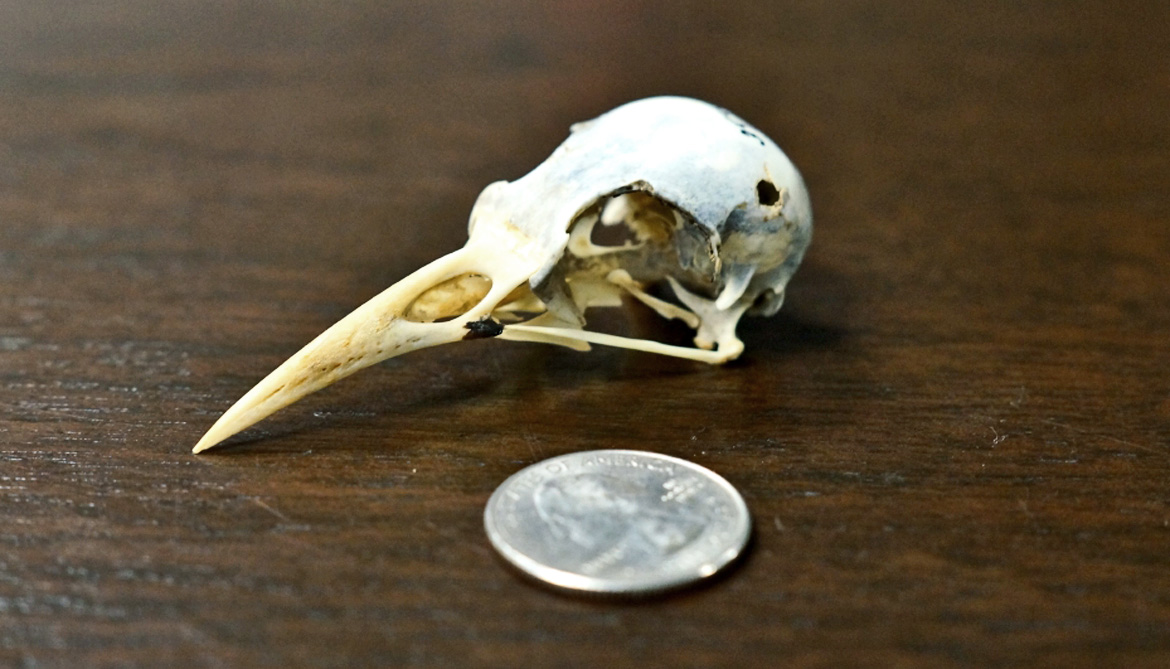 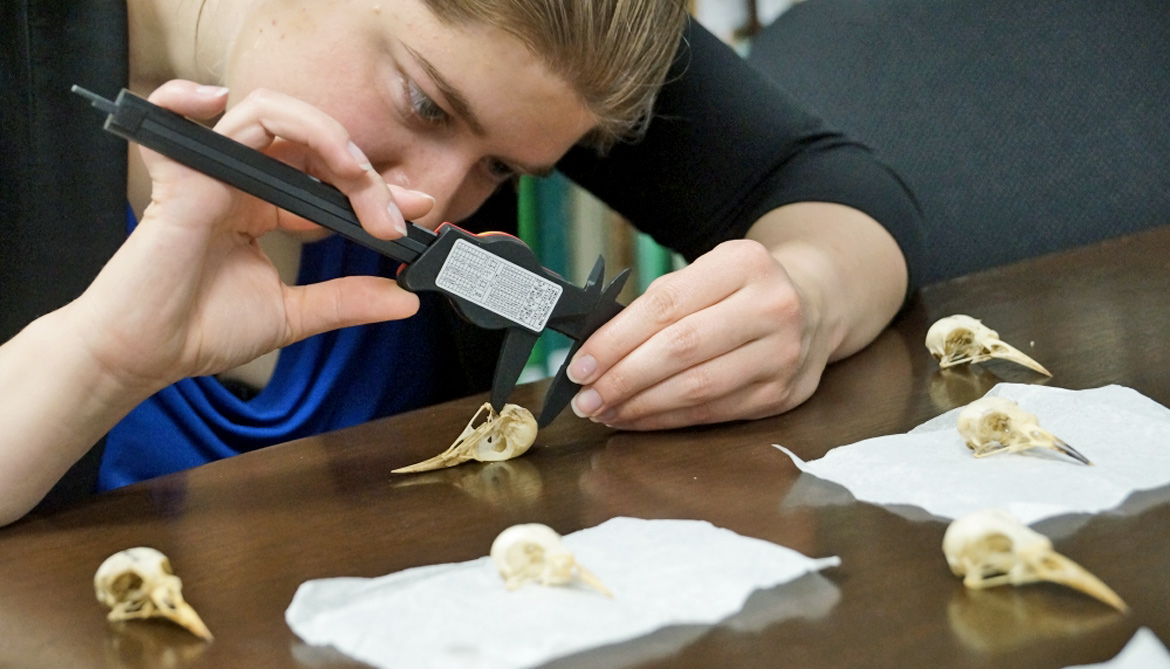 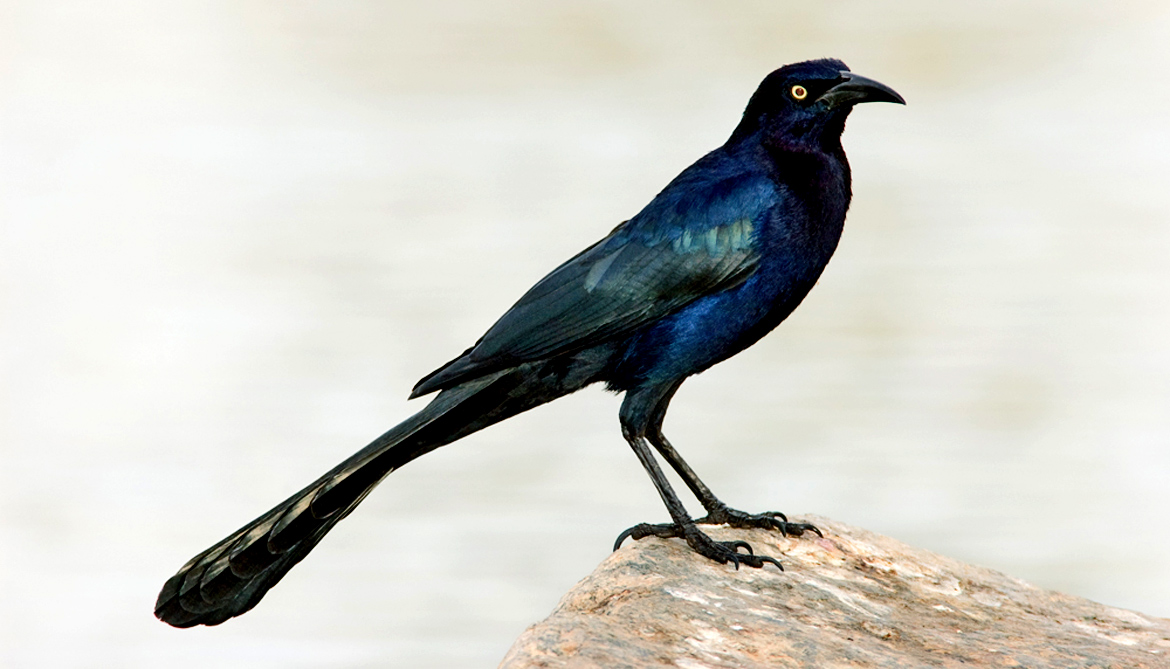 Corina Logan set out to accurately approximate the brain size of live great-tailed grackles by measuring their heads, rather than the insides of their skulls.

Instead, she discovered that the method biologists and other scientists have been using to compare brain size across species is not appropriate for looking at individual differences within a species—particularly this species.

Logan, whose work focuses on the cognitive abilities of the great-tailed grackle, a member of the blackbird family, was a junior research fellow at the University of California, Santa Barbara’s SAGE Center for the Study of the Mind when she conducted her research. Her findings appear in the journal PeerJ.

“People love to study brain size,” says Logan, currently a research fellow in the zoology department at the University of Cambridge. “It’s a huge topic. And there is growing interest in how brain size varies within a species, which can tell us what factors contribute to the evolution of large brains.”

So Logan and coauthor Christin Palmstrom, an undergraduate student in biology when the research was conducted, acquired skulls from museums and measured them via two methods: They used CT scans to measure the volume of the inside of the braincase and they used calipers to measure the external skull.

They scanned the skulls and then used computer software to calculate the endocranial volume, which, according to Logan, is a common proxy for brain size. The CT scan was the more accurate method for calculating endocranial volume, to which they compared length, width, and height measurements the made using the calipers.

“If the external skull measurements matched the volumes from the CT scans well enough, then we could use the CT scan or caliper methods interchangeably,” Logan says.

According to Logan, it’s impossible to approximate brain size using the external skull measurement because it varies so much within this species. That was surprising to her on a couple of levels. “First, I was surprised that the external skull measurements did not accurately predict the actual endocranial volumes,” she says. “But I was also surprised that there was so much variation, particularly in males.”

Scientists don’t generally publish negative results—i.e. not finding what they’re looking for—but in this case, Logan’s unexpected result is quite interesting. She demonstrated that the Pearson product-moment correlation coefficient, which is commonly used to measure the degree to which two variables relate to each other (such as the two indirect measures of brain size), is not the right test to apply to these data. It overlooks differences in the individual data points, she notes, which was the whole point of the study.

“People see a ‘significant correlation’ between two sets of measurements and think it works,” Logan says. “But it’s often not a very tight correlation. There is an overreliance on any level of correlation as long as it’s significant.”

“What I found is that if you plug in a new number, you can’t tell it apart from the other numbers in the data set because the prediction intervals for most of the data points overlapped with each other,” she says. “So the external skull measurements aren’t helpful. They don’t tell us what their brain size actually is.”

The results, she adds, emphasize the importance of validating and explicitly quantifying the predictive accuracy of brain size proxies for each species and sex.

According to Logan, scientists can no longer take for granted what has previously been determined as accurate and correct. “Statistical methods in biology are in flux right now,” she says. “People are switching from using statistics based on p-values, like the Pearson correlation, to methods that allow one to look at the finer details of the effects occurring in the data set.”

For the study, the university’s Cheadle Center for Biodiversity and Ecological Restoration (CCBER), which preserves and manages multiple natural history collections, including plants, animals, algae and diatoms, borrowed grackle skulls from the Museum of Southwestern Biology in Albuquerque, New Mexico, and the University of Kansas Biodiversity Institute, and the Santa Barbara Museum of Natural History.

In her work, Logan studies live birds rather than skeletons, but as she says, “Working with museum specimens can fill a really important piece of the puzzle for me.