U. NOTTINGHAM (UK) — Researchers are using GPS and satellite communication technology to track elephants in Malaysia and to evaluate the government’s conservation efforts.

A hundred years ago wild elephants on the Malay Peninsular could be counted in the thousands—now there are fewer than 1,500. Over the last century around 50 percent of forest cover in Peninsular Malaysia has been lost. 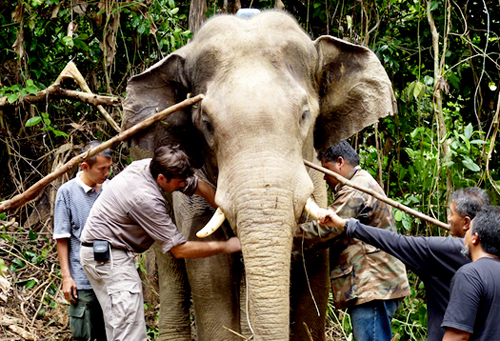 In the next few years the researchers intend to fit 50 elephants, which would mean three percent of the Malaysian elephant population, with GPS-satellite tracking devices to monitor how they are responding to the changes in their habitat. (Credit: U. Nottingham)

Experts from the University of Nottingham Malaysia Campus (UNMC) and the Malaysian Department of Wildlife and National Parks are tracking some of the remaining elephants to assess the effectiveness of the Malaysian Government’s elephant conservation and management practices.

MEME, the Management & Ecology of Malaysian Elephants, is a five year research project led by Ahimsa Campos-Arceiz, an ecologist and conservation expert, in the School of Geography.

“Ultimately, elephants create habitat heterogeneity and promote forest regeneration. All this will be lost and we will have a much more simplified ecosystem that is less resilient and has lost a lot of its diversity.”

Recent research led by Campos-Arceiz has shown that the elimination of seed-dispersing animals such as the Asian elephant puts the structural integrity and biodiversity of the tropical forest of South-East Asia at risk.

His team of international experts has confirmed that not even herbivores like tapirs can replace them in doing this essential job. Their study has just been published in the academic journal Biotropica.

Campos-Arceiz says: “Elephants and rhinoceroses play a unique ecological role that cannot be replaced by other species. These mega herbivores act as the ‘gardeners’ of humid tropical forests. They are vital to forest regeneration and maintain its structure and biodiversity.

“If the elephants and rhinoceroses are lost the ecological trajectories of the ecosystem will change irreversibly.”

Hunted for their tusks and stripped of their natural habitat to make way for crops, roads, and new settlements, the Asian elephant is listed as endangered by the International Union for Conservation of Nature’s Red List.

MEME will produce information on how elephants move in natural habitats as well as in human-dominated landscapes and how they respond to translocation—one of the practices used to move elephants away from areas of human-elephant conflict (HEC).

The project is also looking at non-invasive techniques to extract DNA and hormones from elephant feces, developing cost-effective strategies to mitigate human-elephant conflict, and improving our understanding of elephant ecological function in tropical rainforests.

MEME and the Department of Wildlife and National Parks aim to develop a conservation strategy based on scientifically sound knowledge of elephant behavior, ecology, and a clear understanding of the underlying causes of human-elephant conflict.

In the next few years they intend to fit 50 elephants, which are three percent of the Malaysian elephant population, with GPS-satellite tracking devices to monitor how they are responding to the changes in their habitat, how they react to translocation—and what effect current conservation measures such as highway viaducts and wildlife corridors are having on the elephant population on the Malay Peninsula.

Once the GPS collar is fitted the elephant’s whereabouts can be tracked in the field using VHF radio signal or at any location with internet connection to access the GPS locations transmitted by the collar via satellite phone. With USB internet modems, the team is often able to access Internet in the field, which makes field tracking far easier.

Campos-Arceiz and his team work in close collaboration with the Department of Wildlife and National Parks of Peninsular Malaysia. They have a permanent field center deep in the Malaysian jungle, a field project manager, and a team of research assistants and field assistants who are already monitoring nine elephants which have been fitted with the specially designed tracking collars.

The project has received funding of approximately $1.1 million from a foundation set up by the Malaysian based multinational Sime Darby to help MEME develop a long term strategy to protect the country’s elephant population. Other important donors for the project are Singapore Zoo, Copenhagen Zoo, the National Zoo (US), US Fish & Wildlife Service, and private philanthropists.

The new funding will help to support three PhDs specifically for Malaysian students to study elephant stress levels, the development of genetic molecular tools to study elephant populations in tropical rainforests and the characterization and mitigation of HECs.

Campos-Arceiz says: “These scholarships will help to establish a bigger pool of local experts in wildlife management. We also employ staff from the Orang Asli community, Malaysian indigenous people, to tap into their expertise and knowledge of the elephants and their habitat in the rainforests of Peninsular Malaysia.”

How sunscreen on tourists poisons corals