STANFORD (US) — Researchers have created a computer program that defeats audio captchas on website account forms, leaving them vulnerable to automated attacks.

Visual captchas are groups of distorted letters and numbers that prove the user is a human, not a computer program with malicious intent.

Audio captchas, designed to help the visually impaired, require users to accurately listen to a string of spoken letters and/or numbers disguised by background noise.

The program, called Decaptcha, successfully decoded Microsoft’s audio captcha about 50 percent of the time and correctly broke only about 1 percent of reCAPTCHA’s codes, the most difficult ones of those tested.

But even this small success rate is considered trouble for websites such as YouTube and Facebook that get hundreds of millions of visitors each day.

“In the battle of humans versus computers, we lost round one for audio captchas,” says Elie Bursztein, postdoctoral researcher at Stanford University. “But we have a good idea of what round two should be.”

Bursztein and John Mitchell, professor of computer science, built a computer program that could listen to and correctly decipher commercial audio captchas used by Digg, eBay, Microsoft, Yahoo and reCAPTCHA, a company that creates captchas. They presented their results during a symposium on security and privacy in Oakland, Calif.

The researchers taught their program to recognize the unique sound patterns for every letter of the alphabet, as well as numeral digits. Then they challenged their software to decode audio captchas it had never heard before.

The program worked by identifying the sound shapes in the target captcha file, comparing them to those stored in its memory. It worked—the software could to some extent imitate human hearing.

Designing captchas is challenging because the tests must be simple enough for users to answer quickly, yet complicated enough so computers struggle to decipher the patterns. Background noise in an audio captcha can confuse computers, but little is known about the types of noises that trip them up the most.

The researchers generated 4 million audio captchas mixed with white noise, echoes or music, and challenged the program to decode them. After training Decaptcha with some samples, they took it for a test drive. The program easily defeated captchas mixed with static or repetition, with a 60 to 80 percent success rate, but background music made the task more difficult.

Decaptcha removes the background noise from each audio file, leaving distinctively shaped spikes of energy for each digit or letter in the captcha. The program clearly isolates these spikes from white noise or echoes. But when the captcha contains noises that mimic these energy spikes, Decaptcha is often confused. 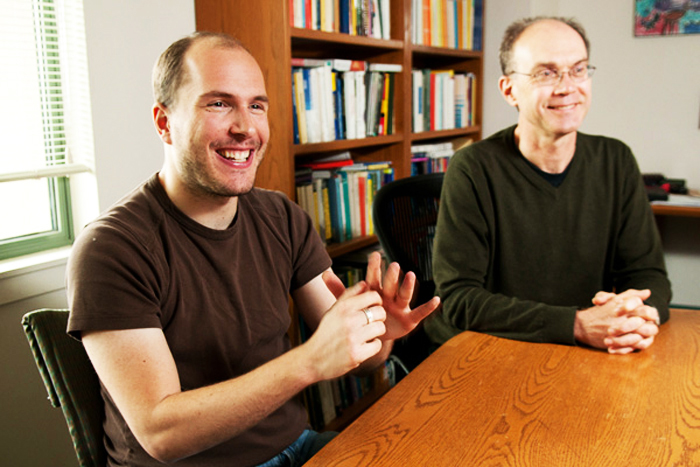 Building a program to solve captchas is “an interesting test case for machine learning technology,” Mitchell says. “For audio, it’s in a realm where machines should do better than humans.”

And they do, until they have to think like us. Music lyrics or garbled voices are forms of semantic noise—sounds that carry meaning. Humans can recognize a message mixed with semantic noise, but computers can’t distinguish the two clearly. Decaptcha correctly solved only about 1 percent of these captchas.

Of the commercial captchas the team tested, reCAPTCHA was the strongest because it contains background conversation and other semantic noise. Microsoft and Digg have recently changed their audio captchas to use this technology, Bursztein says. But the creation of this latest captcha cracker shows that even the best approach isn’t secure enough. “The replacement technology isn’t there yet, but we’ve pinpointed the problem.”

About 1 percent of people who register at the site use audio captchas—enough users to warrant an effort to strengthen this security device.

The researchers suggest programmers tap into our human ability to understand meaning in sounds to improve future captchas. More secure puzzles could include background music or entire words instead of a string of letters. But the team cautions that programmers need to keep the human user in mind. If the captcha is too complicated, legitimate users won’t be able to decode it.

Despite efforts to strengthen audio captchas against computer attacks, they will, like visual captchas, still be vulnerable to crowdsourced attacks by a group of people manually solving captchas for low wages.

Captchas are vital to freedom on the Internet, because the value of many social media sites depends on the assumption that fellow users are humans.

“Captchas are a big inconvenience to people,” Mitchell says. “The fact that they’re so widely used is evidence of their necessity.”

Researchers from Tulane University contributed to the study that was funded by the National Science Foundation, the Air Force Office of Scientific Research, and the Office of Naval Research.

Malware lurks in many corners of ‘the cloud’

Will you fall for an email scam this tax season?