USC (US) — Stress may turn us into zombies, but mindless behavior doesn’t just lead to overeating and shopping sprees—it can also make us stick with good behaviors.

Across five experiments to appear in the June issue of the Journal of Personality and Social Psychology, the researchers provide an important new twist to the established idea that we have finite resources for self-regulation, meaning it’s harder to take control of our actions when we’re already stressed or tired.

It turns out we’re just as likely to default to positive habits, such as eating a healthy breakfast or going to the gym, as we are to self-sabotage.

The research shows that lack of control doesn’t automatically mean indulgence or hedonism — it’s the underlying routine that matters, for better or worse. 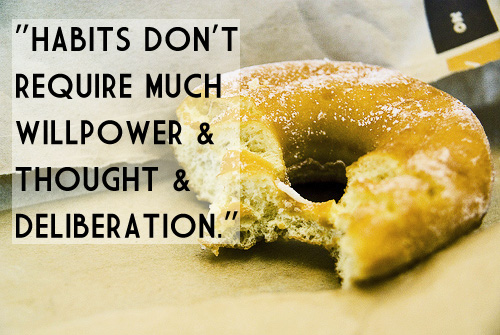 “Habits don’t require much willpower and thought and deliberation,” says Wendy Wood. “So, the central question for behavior change efforts should be, how can you form healthy, productive habits? What we know about habit formation is that you want to make the behavior easy to perform, so that people repeat it often and it becomes part of their daily routine.” (Credit: Ken Hawkins/Flickr)

“When we try to change our behavior, we strategize about our motivation and self-control. But what we should be thinking about instead is how to set up new habits. Habits persist even when we’re tired and don’t have the energy to exert self-control,” says Wendy Wood, professor of psychology and business at University of Southern California.

Wood is an expert on habit, the automatic behaviors that make it possible for us to function every day (imagine if we had to relearn every morning how to brush our teeth or what route to take to work).

Learned habits also play a big role in our health—research has shown that exercise, overeating, and smoking are significant risk factors for major diseases. Indeed, obesity and smoking are the two primary reasons Americans die before people in other high-income countries, according to a recent National Academy of Sciences report led by Professor Eileen Crimmins of the USC Davis School of Gerontology.

But while most disease prevention efforts focus on self-control, the latest research from Wood shows that the best way to prevent disease might be knowing how to let go.

“Everybody gets stressed. The whole focus on controlling your behavior may not actually be the best way to get people to meet goals,” she says. “If you are somebody who doesn’t have a lot of willpower, our study showed that habits are even more important.”

For example, in one experiment Wood and her co-investigators followed students for a semester, including during exams. They found that during testing periods, when students were stressed and sleep-deprived, they were even more likely to stick to old habits. It was as if they didn’t have the energy to do something new, Wood explains.

Students who ate unhealthy breakfasts during the semester, such as pastries or doughnuts, ate even more of the junk food during exams. But the same was true of oatmeal-eaters: Those in the habit of eating a healthy breakfast were also more likely to stick to routine and ate especially well in the morning when under pressure.

Similarly, students who had a habit of reading the editorial pages in the newspaper every day during the semester were more likely to perform this habit during exams—even when they were limited in time. And regular gym-goers were even more likely to go to the gym when stressed.

“You might expect that when students were stressed and had little time, they wouldn’t read the paper at all, but instead they fell back on their reading habits,” Wood says. “Habits don’t require much willpower and thought and deliberation.”

Wood continues: “So, the central question for behavior change efforts should be, how can you form healthy, productive habits? What we know about habit formation is that you want to make the behavior easy to perform, so that people repeat it often and it becomes part of their daily routine.”

David Neal, a former assistant psychology professor at USC is co-leader of the study, to which Aimee Drolet of the University of California, Los Angeles, also contributed.

How dementia caregivers can cope with the holidays

To avoid the health effects of stress, get proactive