U. CHICAGO (US)—Religious people tend to use their own beliefs as a guide in thinking about what God believes, but are less constrained when reasoning about other people’s beliefs, according to a new study.

Nicholas Epley, professor of behavioral science at the University of Chicago’s Booth School of Business, led the research, which included a series of survey and neuroimaging studies to examine the extent to which people’s own beliefs guide their predictions about God’s beliefs. The findings—published in the Nov. 30 early edition of the Proceedings of the National Academy of Sciences (PNAS)—extend existing work in psychology showing that people are often egocentric when they infer other people’s beliefs.

The PNAS paper reports the results of seven separate studies. The first four include surveys of Boston rail commuters, Chicago undergraduate students, and a nationally representative database of online respondents in the United States. In these surveys, participants reported their own belief about an issue, their estimated God’s belief, along with a variety of others, including Microsoft founder Bill Gates, Major League Baseball’s Barry Bonds, President George W. Bush, and an average American.

Two other studies directly manipulated people’s own beliefs and found that inferences about God’s beliefs tracked their own beliefs. Study participants were asked, for example, to write and deliver a speech that supported or opposed the death penalty in front of a video camera. Their beliefs were surveyed both before and after the speech. 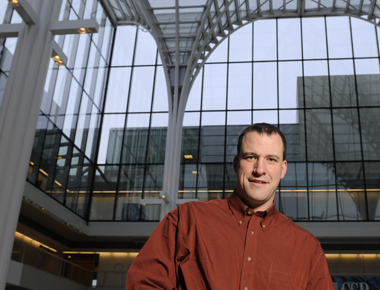 Nicholas Epley, professor of behavioral science at the University of Chicago’s Booth School of Business, led the research, which included a series of survey and neuroimaging studies to examine the extent to which people’s own beliefs guide their predictions about God’s beliefs. (Credit: Dan Dry)

The researchers note that people often set their moral compasses according to what they presume to be God’s standards. “The central feature of a compass, however, is that it points north no matter what direction a person is facing,” they conclude. “This research suggests that, unlike an actual compass, inferences about God’s beliefs may instead point people further in whatever direction they are already facing.”

But the research in no way denies the possibility that God’s presumed beliefs also may provide guidance in situations where people are uncertain of their own beliefs, the coauthors note.

Researchers from Australia’s Monash University contributed to the study that was funded by the University of Chicago Booth School of Business, Templeton Foundation, and National Science Foundation.

People want the COVID vax more when it’s a trend