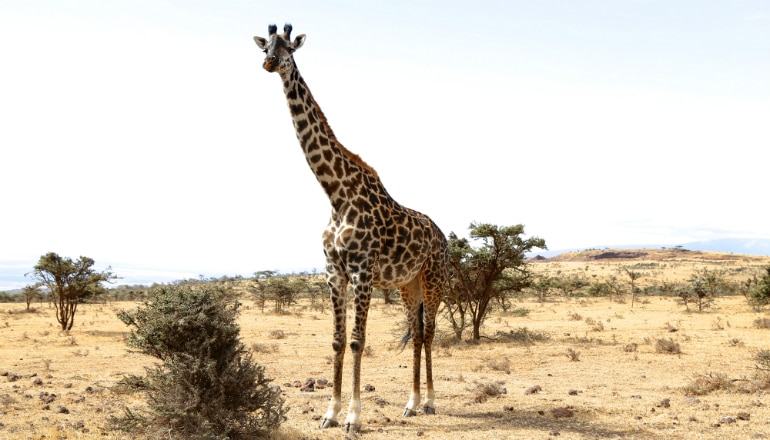 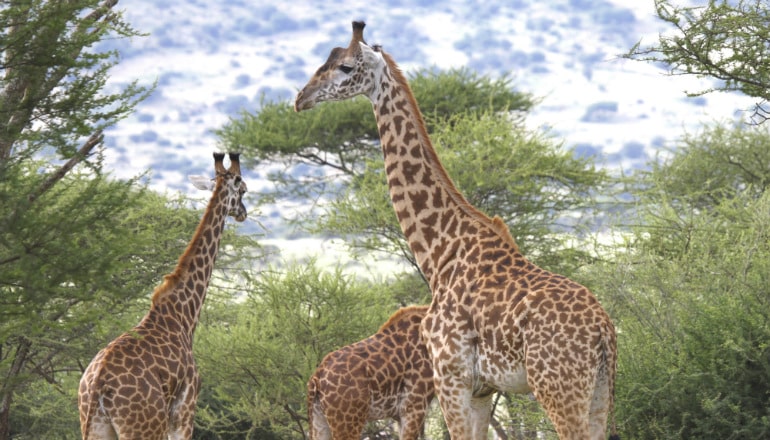 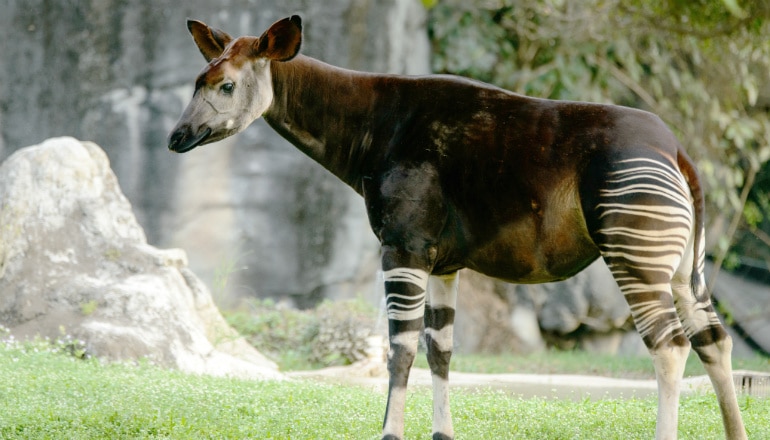 The okapi’s gene sequences are very similar to the giraffe's. (Credit: Eric Kilby/Flickr) 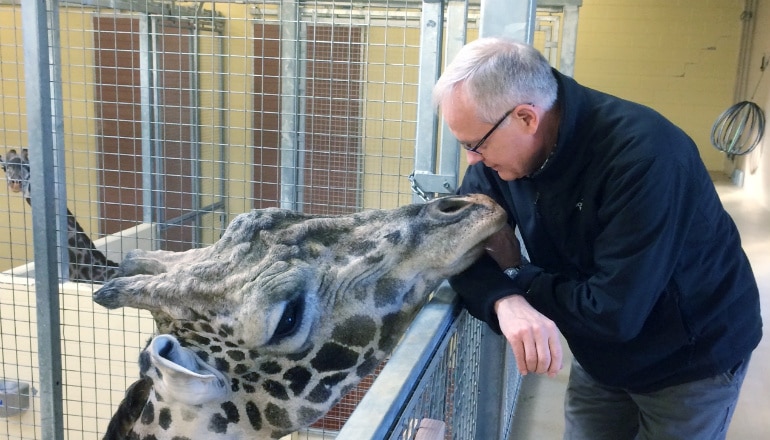 Scientists have identified 70 genes that could help explain many of the giraffe’s unusual characteristics—not just its height, but also how it can pump blood to its head.

“The evolutionary changes required to build the giraffe’s imposing structure and to equip it with the necessary modifications for its high-speed sprinting and powerful cardiovascular functions have remained a source of scientific mystery since the 1800s, when Charles Darwin first puzzled over the giraffe’s evolutionary origins,” says Douglas Cavener, a biology professor at Penn State.

The giraffe’s heart, for example, must pump blood two meters straight up in order to provide an ample blood supply to its brain. This feat is possible because the giraffe’s heart has evolved to have an unusually large left ventricle, and the species also has blood pressure that is twice as high as other mammals.

“We hope that the publication of the giraffe genome and clues to its unique biology will draw attention to this species in light of the recent precipitous decline in giraffe populations,” says Cavener. “While the plight of the elephant … has received the lion’s share of attention, giraffe populations have declined by 40 percent over the past 15 years due to poaching and habitat loss. At this rate of decline, the number of giraffes in the wild will fall below 10,000 by the end of this century. Some giraffe subspecies already are teetering on the edge of extinction.”

To identify genetic changes likely to be responsible for the giraffe’s unique characteristics, including sprints that can reach 37 miles per hour (60 km/h), Cavener and Morris Agaba of the Nelson Mandela African Institute for Science and Technology in Tanzania compared the gene-coding sequences of the giraffe and the okapi to more than forty other mammals, including the cow, sheep, goat, camel, and human.

“Okapi’s gene sequences are very similar to the giraffe’s because the okapi and giraffe diverged from a common ancestor only 11-to-12 million years ago—relatively recently on an evolution timescale,” Cavener says. “In spite of this close evolutionary relationship, the okapi looks more like a zebra and it lacks the giraffe’s imposing height and impressive cardiovascular capabilities.

“For these two reasons, Okapi’s genome sequence provides a powerful screen that we have used to identify some of the giraffe’s unique genetic changes.”

Using a battery of comparative tests to study the genome sequences of the giraffe and the okapi, the scientists discovered 70 genes that showed multiple signs of adaptations. More than half of those genes code for proteins that are known to regulate development and physiology of the skeletal, cardiovascular, and nervous system—just the type of genes predicted to be necessary for driving the development of the giraffe’s unique characteristics.

The scientists also discovered genetic clues to the evolution of the giraffe’s long neck and legs, which have the same number of bones as the neck and legs of humans and other mammals.

“To achieve their extraordinary length, giraffe cervical vertebrae and leg bones have evolved to be greatly extended,” Cavener says. “At least two genes are required: one gene to specify the region of the skeleton to grow more and another gene to stimulate increased growth.”

Among the 70 genes that the team’s research revealed are markedly different in the giraffe, the scientists identified genes that are known to regulate both of these functions. They detail all the results in a paper published in Nature Communications.

“The most intriguing of these genes is FGFRL1, which has a cluster of amino acid substitutions unique to giraffe that are located in the part of the protein that binds fibroblast growth factors—a family of regulators involved in regulating many processes, including embryo development,” Cavener says.

This fibroblast-growth-factor pathway plays a crucial role in controlling development, beginning in early development of the embryo and extending through the bone-growth phase after the giraffe is born. In humans and also in mice, severe skeletal and cardiovascular defects are associated with debilitating mutations in this gene.

The scientists identified four homeobox genes—the kind involved in the development of body structures—which are known to specify the regions of the spine and legs. Cavener speculates, “The combination of changes in these homeobox genes and the FGFRL1 gene might provide two of the required ingredients for the evolution of the giraffe’s long neck and legs.”

Agaba first noticed a group of genes regulating metabolism and growth that were diverged in giraffe as compared to okapi. One of these genes encodes the receptor for folic acid, which is an essential B vitamin necessary for normal growth and development.

Other metabolic genes that the scientists found to be significantly changed in giraffe are those involved in the metabolism of the volatile fatty acids that are generated by the fermentation of ingested plants—the major source of energy for the giraffe and other ruminants like cattle and goats. The giraffe has an unusual diet of acacia leaves and seedpods, which are highly nutritious but also are toxic to other animals. The scientists speculate that the genes responsible for metabolizing acacia leaves may have evolved in the giraffe in order to circumvent this toxicity.

Penn State and the Nelson Mandela African Institute for Science and Technology supported the project.