UC BERKELY (US) — By sequencing the genome of the highly invasive Argentine ant—and of three other ant species—researchers have uncovered a how-to guide for being an unstoppable pest.

Among the four ant genomes being reported, the Argentine ant and the fire ant, both native to South America, have established themselves in regions throughout the world, wreaking havoc with the native biodiversity along the way.

“The Argentine ant is a species of special concern because of its enormous ecological impact,” says Neil Tsutsui, associate professor at the University of California, Berkeley, and corresponding author on the Argentine ant paper. “When the Argentine ants invade, they devastate the native insect communities while promoting the population growth of agricultural pests. This genome map will provide a huge resource for people interested in finding effective, targeted ways of controlling the Argentine ant.”

The draft genome of the Argentine ant (Linepithema humile)—the tiny brown insect that homeowners so frequently find marching en masse through their kitchens—is among a trio of ant genomes being published the week of Jan. 31 in the journal Proceedings of the National Academy of Sciences. The other two ant species are the red harvester ant (Pogonomyrmex barbatus) and the red imported fire ant (Solenopsis invicta).

In addition, the genome sequence of a fourth ant, the leaf-cutter ant (Atta cephalotes), is scheduled for publication in the Feb. 10 issue of the journal PLoS Genetics.

Super ants
Colonies of Argentine ants in their native habitat are territorial and aggressive, helping to keep their populations in check. In contrast, previous research by Tsutsui and others reveal that invasive populations of Argentine ants are genetically similar, considering each other friends rather than foes.

In the United States, this has allowed groups to form one enormous “super-colony,” stretching hundreds of miles along the coast of California. Instead of fighting each other, the invasive ants focus their energies on conquering other insect species, including native ants.

In 2009, Tsutsui published a study in which he turned normally friendly ants into hostile combatants by coating them with chemicals known to trigger aggressive behavior. That line of research could be aided by the new genome map, according to Tsutsui, helping researchers understand and manipulate genes to interfere with mating, break up the super-colony, develop repellants or simply attract ants to a trap.

Killer senses
The genome sequence revealed that Argentine ants have a huge number of genes for sensory receptors, including 367 for odor and 116 for taste.

The Argentine ant genome also possesses a large number of cytochrome P450 genes, which are important in detoxifying harmful substances. Argentine ants have 111 such genes, while European honeybees, in comparison, have 46.

The researchers attribute the relatively high number of cytochrome P450 genes in the Argentine ant to the larger variety of toxins the species encounters in its broad and varied diet. Researchers say studying these genes could also help researchers determine if the ants are evolving resistance to pesticides. 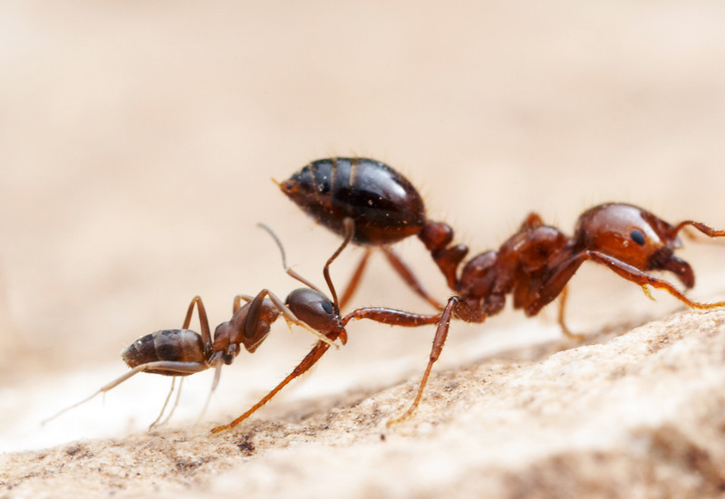 A feisty little Argentine ant attacks a much larger fire ant. Both species co-exist naturally in subtropical South America, but in the southern United States, where both have been accidentally introduced, the fire ant has displaced the Argentine ants. (Credit/Copyright: Alex Wild)

When the researchers looked at a family of genes associated with immunity, the Argentine ant genome had a relatively modest count of 90 genes compared with 152 for the fruit fly. This was surprising, they say, given how Argentine ants are packed into crowded, close quarters, and in the case of invasive populations, have a fairly homogeneous gene profile. Such factors are typically conducive to the spread of pathogens, yet the Argentine ant populations have remained robust.

It may be that the Argentine ant has mechanisms to prevent disease that are similar to those of honeybees—which have only 78 comparable immune genes—such as frequent grooming and the quick removal of dead bodies from the colony, the researchers say. Genes for anti-microbial chemicals may yet be identified.

No magic bullet
While the sequenced genome provides hope for an effective weapon against the Argentine ant, Christopher Smith, assistant professor of biology at San Francisco State University, cautions against the expectation of a quick or easy fix.

“In biology, the idea is that once we know the genome of a pest species, we can come up with a magic bullet or smarter bullet to defeat it,” says Smith, who is the study’s lead author. “In reality, the genome is really just information; we now have to put that into action, and in order to do that, we must genetically manipulate ants to confirm if a target gene does what we think it does.

“Having a genome is like being handed a big book with a bunch of words we don’t understand. Now we have to figure out the grammar and syntax.”

Social order
But the genetic code provides value beyond the effort to counter the Argentine ant. The addition of more ants to the genome library also helps evolutionary biologists and geneticists understand the special caste system of social insects.

Ants, like the European honeybee whose genome was sequenced in 2006, thrive in a caste system in which the workers in a colony live to serve the queen, who is the only individual that can reproduce.

“The idea that there are female workers in ant societies that don’t reproduce was hard for Darwin to understand,” says Smith. “Is that destiny somehow encoded in the ant’s genome? Now that we’re able to compare the genomes of ants and bees, species that are evolutionarily distant, we can show that caste is not genetically determined and focus on how different expression of the same genome can result in either workers or queens.”

Tweets could track the spread of invasive insects