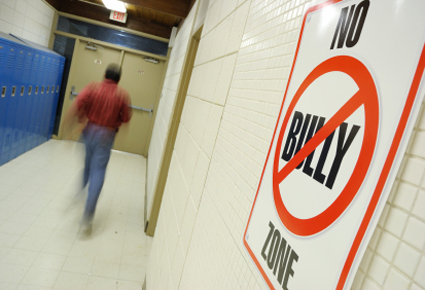 Cyberbullying includes attacks such as electronic distribution of humiliating photos, dissemination of false or private information, or targeting victims in cruel online polls. Among the non-heterosexual respondents of a recent survey, 45 percent reported feeling depressed as a result of being cyberbullied, 38 percent felt embarrassed, and 28 percent felt anxious about attending school. (Courtesy: iStockphoto)

IOWA STATE—One out of two lesbian, gay, bisexual, or transgender (LGBT) youth have been victims of cyberbullying, according to a new survey.

“There’s a saying that we’ve now changed to read, ‘Sticks and stones can break my bones, but words can kill,'” says Warren Blumenfeld, assistant professor of curriculum and instruction at Iowa State University.

“And especially at this age—pre-adolescence through adolescence—this is a time when peer influences are paramount in a young person’s life.

“If one is ostracized and attacked, that can have devastating consequences—not only physically, but on their emotional health for the rest of their lives.”

Blumenfeld says the bullying—which inflicts emotional harm in a stealth manner by working through Web sites, chat rooms, e-mail, cell phones, and instant messaging—causes psychological and emotional distress, at times producing thoughts of suicide to those who are repeatedly victimized.

In the online survey of 444 junior high, high school, and college students between the ages of 11 and 22—including 350 self-identified non-heterosexual subjects—54 percent of the LGBT and allied youth reported being victims of cyberbullying in the 30 days prior to the survey.

The study appears in the LGBT-themed issue of the International Journal of Critical Pedagogy, being released March 15.

Cyberbullying includes attacks such as electronic distribution of humiliating photos, dissemination of false or private information, or targeting victims in cruel online polls.

Among the non-heterosexual respondents, 45 percent reported feeling depressed as a result of being cyberbullied, 38 percent felt embarrassed, and 28 percent felt anxious about attending school. More than a quarter (26 percent) had suicidal thoughts.

The results underscore the helplessness felt by victims of cyberbullying, Blumenfeld says.

“They feared that there might be more retribution by ‘tattling,'” says Blumenfeld, who was bullied as a teen for being gay.

“One of the things we found is that the LGBT students really want to make a difference,” says Robyn Cooper, a research and evaluation scientist at Iowa State’s Research Institute for Studies in Education.

“They want their stories told. They want people to know what they’re going through, but they don’t want the repercussions of being bullied.”

One in four of the LGBT and allied students responded that they needed to learn how to deal with cyberbullying by themselves.

More than half feared telling their parents because they might restrict their use of technology, which Blumenfeld says is often the “lifeline to the outside world” for many young LGBT students who have been ostracized by their peers at school.

“One of the strategies coming out of this study—since respondents expect and want their peers to step in more—is that we should find ways on our campuses to empower young people to speak up and act as allies,” Blumenfeld says.

“In bullying circles, it’s empowering the bystander to become the upstander to help eliminate the problem.”