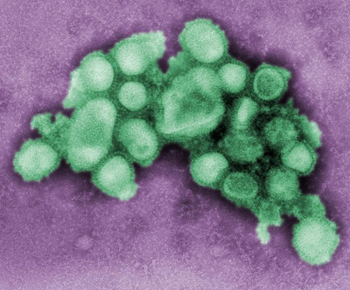 This colorized negative stained transmission electron micrograph shows details of the swine flu virus. The classical swine flu virus (an influenza type A H1N1 virus) was first isolated from a pig in 1930. (Credit: C. S. Goldsmith and A. Balish/CDC)

EMORY (US)—A new H1N1 self-assessment tool for consumers and health care workers is available on several major national Web sites—including flu.gov. The tool is designed to help people decide what to do if they are worried that they or someone they love has flu symptoms.

With the current H1N1 flu pandemic under way, public health officials are concerned that critical health care resources could be stretched thin if everyone with flu symptoms rushes to the nearest ER or doctor’s office to determine what to do.

Although the flu, including 2009 H1N1 flu, can cause serious illness and death in some people, the majority of people who get the flu will have a relatively mild form of illness that gets better on its own.

In addition to the flu.gov web site, the Centers for Disease Control and Prevention and Microsoft’s H1N1 Response Center posted the tool, which was developed by Emory University medical and public health experts.

The assessment helps individuals determine whether their symptoms could be caused by the flu virus, whether their illness is severe enough to warrant immediate medical attention, and whether they are at increased risk for developing severe disease.

“Certain people are more vulnerable to the effects of the H1N1 flu virus than others,” says Arthur Kellermann, professor of emergency medicine and an associate dean at the Emory School of Medicine. “This Web site is carefully designed to encourage those who are severely ill, and those at increased risk for serious illness, to contact their doctor, while reassuring large numbers of people with mild illness that it is safe to recover at home.

“Hopefully, providing easy to understand information to the public will reduce the number of people who are needlessly exposed to H1N1 influenza in crowded clinic and ER waiting rooms, and allow America’s doctors and nurses to focus their attention on those who need us most,” adds Kellermann.

Called the Strategy for Off-Site Rapid Triage, the concept was created and developed by an interdisciplinary team at Emory led by Alexander Isakov, director of the university’s Center for Emergency Prepardness, and Kellermann. Emory’s algorithm and the idea of using a web-based tool to help flu patients decide what to do is endorsed by the American College of Emergency Physicians, the nation’s leading organization for the specialty of emergency medicine.