U. NOTTINGHAM (UK) — A new molecule containing two uranium atoms maintains its magnetism when kept at a low temperature. The discovery is a potential step closer to high-performance computing.

This type of single-molecule magnet (SMM) has the potential to increase data storage capacity by many hundreds, even thousands of times—as a result huge volumes of data could be stored in tiny places.

“This work is exciting because it suggests a new way of generating SMM behavior and it shines a light on poorly understood uranium phenomena,” says chemist Steve Liddle of the University of Nottingham, who created the molecule. “It could help point the way to making scientific advances with more technologically amenable metals such as the lanthanides. The challenge now is to see if we can build bigger clusters to improve the blocking temperatures and apply this more generally.”

Computer hard discs are made up of magnetic material that record digital signals. The smaller you can make these tiny magnets the more information you can store. 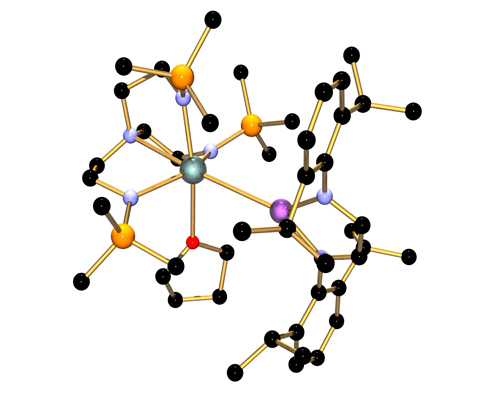 Although it may have somewhat negative PR it seems depleted uranium—a by-product from uranium enrichment and of no use in nuclear applications because the radioactive component has been removed—could now hold some of the key to the research. Liddle has shown that by linking more than one uranium atom together via a bridging toluene molecule SMM behavior is exhibited. The work is reported in the journal Nature Chemistry.

“At this stage it is too early to say where this research might lead, but single-molecule magnets have been the subject of intense study because of their potential applications to make a step change in data storage capacity and realize high-performance computing techniques such as quantum information processing and spintronics.

“The inherent properties of uranium place it between popularly researched transition and lanthanide metals and this means it has the best of both worlds. It is therefore an attractive candidate for SMM chemistry, but this has never been realized in polymetallic systems, which is necessary to make them work at room temperature.”