PENN STATE (US) — Connections among brain regions involved in emotion processing and cognitive control may change with increased exposure to alcohol and alcohol-related cues during the first year of college.

Anecdotal evidence abounds attesting to the many negative social and physical effects of the dramatic increase in alcohol use that often comes with many students’ first year of college. The behavioral changes that accompany those effects indicate underlying changes in the brain. 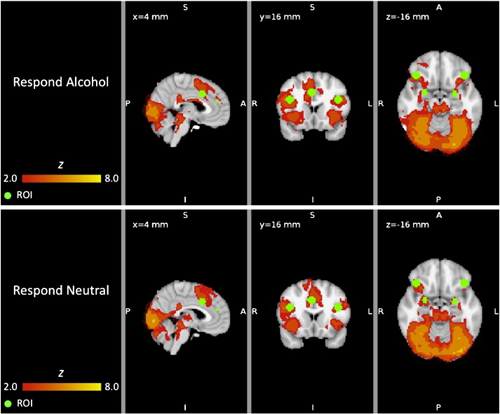 Yet in contrast to alcohol’s numerous other effects, its effect on the brain’s continuing development from adolescence into early adulthood—which includes the transition from high school to college—is not well known.

Penn State psychology graduate student Adriene Beltz and colleagues investigated the changes that occurred to alcohol-related neural processes in the brains of a small group of first-year students. Their study appears in the journal Addictive Behaviors.

Using functional magnetic resonance imaging (fMRI) and a data analysis technique known as effective connectivity mapping, the researchers collected and analyzed data from 11 students, who participated in a series of three fMRI sessions beginning just before the start of classes and concluding part-way through the second semester.

“We wanted to know if and how brain responses to alcohol cues—pictures of alcoholic beverages in this case—changed across the first year of college,” says Beltz, “and how these potential changes related to alcohol use. Moreover, we wanted our analysis approach to take advantage of the richness of fMRI data.”

Analysis of the data collected from the study participants revealed signs in their brains’ emotion processing networks of habituation to alcohol-related stimuli, and noticeable alterations in their cognitive control networks.

Recent studies have indicated that young adults’ cognitive development continues through the ages of the mid-20s, particularly in those regions of the brain responsible for decision-making or judgment-related activity—the sort of cognitive “fine tuning” that potentially makes us, in some senses, as much who we are (and will be) as any other stage of our overall development.

Other recent studies suggest that binge drinking during late adolescence may damage the brain in ways that could last into adulthood.

Beltz’s study indicates that connections among brain regions involved in emotion processing and cognitive control may change with increased exposure to alcohol and alcohol-related cues. Those connections also may influence other parts of the brain, such as those still-developing regions responsible for students’ decision-making and judgment abilities.

“The brain is a complex network,” Beltz says. “We know that connections among different brain regions are important for behavior, and we know that many of these connections are still developing into early adulthood. Thus, alcohol could have far-reaching consequences on a maturing brain, directly influencing some brain regions and indirectly influencing others by disrupting neural connectivity.”

‘Alcohol cues’ and use

While in an fMRI scanner, students participating in the study completed a task: responding as quickly as possible, by pressing a button on a grip device, to an image of either an alcoholic beverage or a non-alcoholic beverage when both types of images were displayed consecutively on a screen. From the resulting data, effective connectivity maps were created for each individual and for the group.

Examining the final maps, the researchers found that brain regions involved in emotion-processing showed less connectivity when the students responded to alcohol cues than when they responded to non-alcohol cues, and that brain regions involved in cognitive control showed the most connectivity during the first semester of college.

The findings suggest that the students needed to heavily recruit brain regions involved in cognitive control in order to overcome the alcohol-associated stimuli when instructed to respond to the non-alcohol cues.

“Connectivity among brain regions implicated in cognitive control spiked from the summer before college to the first semester of college,” says Beltz. “This was particularly interesting because the spike coincided with increases in the participants’ alcohol use and increases in their exposure to alcohol cues in the college environment.

Although the immediate implications of the pilot study for first-year students are fairly clear, there are still a number of unanswered questions related to alcohol’s longer-term effects on development, for college students after their first year and for those same individuals later in life.

To begin exploring those potential long-term effects, Beltz has planned a follow-up study to track a larger number of participants over a greater length of time.

Other scientists involved in the research are affiliated with Penn State, Virginia Polytechnic Institute and State University, and the University of California, San Diego.

The National Institute on Alcohol Abuse and Alcoholism and the National Science Foundation partially funded the study.