U. MICHIGAN (US) — Over the next two years, the US economy will regain the rest of the nearly 9 million jobs lost in the Great Recession, economists predict.

During the 2008-09 economic downturn, employment fell by 8.8 million jobs—but the economy has recovered 4.5 million jobs in the last three years. By the end of 2014, another 4.3 million jobs will be added as the economy grows at a moderate pace with steadily falling unemployment, they say.

“The pundits had been reminding us for months that no incumbent president since Franklin Roosevelt had been re-elected with the unemployment rate higher than 7.2 percent and it was 7.9 percent in October,” says Joan Crary, economist at the University of Michigan. 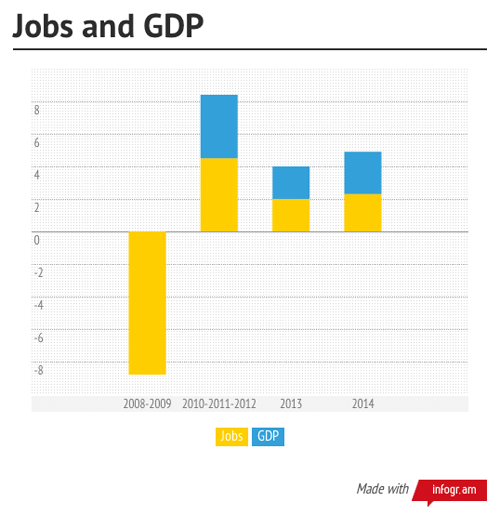 The researchers predict the creation of 2 million jobs in 2013 and another 2.3 million in 2014. See an interactive version here. (Credit: U. Michigan)

“The presidential election is over, the voters have spoken, and yet President Obama will now serve another term. Although the macroeconomy is still underperforming, it apparently was not bad enough to deny the president another four years.”

In their annual forecast of the US economy, Crary and colleagues Daniil Manaenkov and Matthew Hall predict the creation of 2 million jobs in 2013 and another 2.3 million in 2014 as unemployment falls from 7.9 percent to 7.2 percent during that time.

They project overall economic output growth (as measured by real Gross Domestic Product) of 2 percent in 2013 and 2.6 percent in 2014—compared to last year’s 1.8 percent and this year’s 2.1 percent growth.

In addition to moderate growth in GDP and employment over the next two years, the forecast calls for a solid recovery in the housing market. Single-family starts—at an all-time low in 2011—increased by about 100,000 units this year to 540,000. They are expected to rise to 750,000 next year and to more than 1 million in 2014.

“The collapse of private residential construction following the bursting of the housing bubble was unprecedented,” Manaenkov says. “After scraping along the bottom during 2009–10, single-family housing starts finally started to rise late in 2011. However, new housing starts are well below the level needed to keep up with new household formation, suggesting that starts will need to keep rising at a rapid pace for some time.”

Mortgage rates to creep up

Conventional mortgage rates will creep upward during the forecast period from a current 3.4 percent to 3.7 percent in 2013 and 4.1 percent the year after—still attractive by historical standards. The 10-year Treasury note will edge up from 1.8 percent this quarter to 2.4 percent by the end of 2014, while the three-month Treasury bill rate will hold steady at 0.1 percent.

Finally, the forecast predicts that light vehicle sales—on pace this year to post the largest annual increase since 1984—will continue to improve from 12.7 million units in 2011 to 14.3 million this year, 15 million next year and 15.6 million in 2014.

Overall, the economists say that despite projected growth and higher employment, many economic headwinds will continue to plague the recovery.

“By now, most are well aware of the fiscal cliff the economy is facing at the end of the year if the lame-duck Congress does not act,” Crary says. “The European debt crisis has ebbed and flowed but remains unresolved. It appears that the belt-tightening actions that have been taken thus far have helped drive the Eurozone back into recession.

“World trade has also been impacted by the deceleration in the Chinese economy. The spate of unusual weather across the nation this year has taken both a human and an economic toll. We will need to continue to navigate these economic—and perhaps natural—hazards in the year ahead.”

The forecast is based on the Michigan Quarterly Econometric Model of the US Economy and compiled by the University of Michigan Research Seminar in Quantitative Economics.

Remote work may actually be good for business