UC BERKELEY (US) — Ancient Roman structures that have withstood the elements for more than 2,000 years are showing engineers how to make today’s concrete more durable and sustainable.

Using the Advanced Light Source at Lawrence Berkeley National Laboratory, engineers and geologists examined the fine-scale structure of Roman concrete. The findings showed for the first time how the extraordinarily stable compound—calcium-aluminum-silicate-hydrate (C-A-S-H)—binds the material used to build some of the most enduring structures in Western civilization.

The discovery could help improve the durability of modern concrete, which within 50 years often shows signs of degradation, particularly in ocean environments. 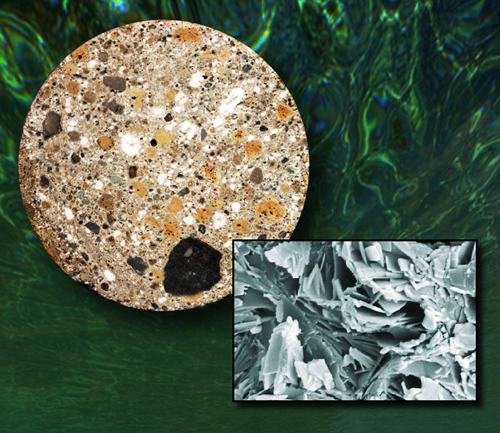 Drill core of volcanic ash-hydrated lime mortar from the ancient port of Baiae in Pozzuloi Bay. Yellowish inclusions are pumice, dark stony fragments are lava, gray areas consist of other volcanic crystalline materials, and white spots are lime. Inset is a scanning electron microscope image of the special Al-tobermorite crystals that are key to the superior quality of Roman seawater concrete. (Credit: UC Berkeley

The manufacturing of Roman concrete also leaves a smaller carbon footprint than does its modern counterpart. The process for creating Portland cement, a key ingredient in modern concrete, requires fossil fuels to burn calcium carbonate (limestone) and clays at about 1,450 degrees Celsius (2,642 degrees Fahrenheit). That process is responsible for seven percent of global carbon dioxide emissions every year.

The production of lime for Roman concrete is much cleaner, requiring temperatures that are two-thirds of that required for making Portland cement.

“Roman concrete has remained coherent and well-consolidated for 2,000 years in aggressive maritime environments,” says Marie Jackson, a research engineer in civil and environmental engineering at University of California, Berkeley.

“It is one of the most durable construction materials on the planet, and that was no accident. Shipping was the lifeline of political, economic and military stability for the Roman Empire, so constructing harbors that would last was critical.”

For the study, published online in the Journal of the American Ceramic Society, Jackson and colleagues characterized samples of Roman concrete taken from a breakwater in Pozzuoli Bay, near Naples, Italy.

Concrete was the Roman Empire’s construction material of choice. It was used in monuments such as the Pantheon in Rome as well as in wharves, breakwaters, and other harbor structures. Of particular interest to researchers is how Roman’s underwater concrete endured the unforgiving saltwater environment.

The recipe for Roman concrete was described around 30 BC by Marcus Vitruvius Pollio, an engineer for Octavian, who became Emperor Augustus. The not-so-secret ingredient is volcanic ash, which Romans combined with lime to form mortar. They packed this mortar and rock chunks into wooden molds immersed in seawater. Rather than battle the marine elements, Romans harnessed saltwater and made it an integral part of the concrete.

Also key was a very rare hydrothermal mineral called aluminum tobermorite (Al-tobermorite) that formed in the concrete. “Our study provided the first experimental determination of the mechanical properties of the mineral,” Jackson says.

Use of Roman concrete decreased because “as the Roman Empire declined, and shipping declined, the need for the seawater concrete declined,” Jackson says. “You could also argue that the original structures were built so well that, once they were in place, they didn’t need to be replaced.”

While Roman concrete is durable, it’s unlikely to replace modern concrete because it is not ideal for construction where faster hardening is needed.

But the researchers are now finding ways to apply their discoveries about Roman concrete to the development of more earth-friendly and durable modern concrete. They are investigating whether volcanic ash would be a good, large-volume substitute in countries without easy access to fly ash, an industrial waste product from the burning of coal that is commonly used to produce modern, green concrete.

“There is not enough fly ash in this world to replace half of the Portland cement being used,” says Paulo Monteiro, professor of civil and environmental engineering.

“Many countries don’t have fly ash, so the idea is to find alternative, local materials that will work, including the kind of volcanic ash that Romans used. Using these alternatives could replace 40 percent of the world’s demand for Portland cement.”

The research began with initial funding from King Abdullah University of Science and Technology in Saudi Arabia (KAUST), which launched a research partnership with UC Berkeley in 2008. Saudi Arabia has “mountains of volcanic ash” that could potentially be used in concrete, Monteiro says. The Loeb Classical Library Foundation, Harvard University, and the Department of Energy provided additional funding.