GEORGIA TECH (US) — When under attack by toxic seaweed, corals send distress signals to fish “bodyguards” that quickly respond to trim back the noxious alga.

The “mutualistic” fish respond to chemical signals from the coral in a matter of minutes. The inch-long fish—known as gobies—spend their entire lives in the crevices of specific corals where they are protected from their own predators and offer protection in return.

This symbiotic relationship between the fish and the coral on which they live is the first known example of one species chemically signaling a consumer species to remove competitors. It is similar to the symbiotic relationship between Acacia trees and mutualist ants in which the ants receive food and shelter while protecting the trees from both competitors and consumers. 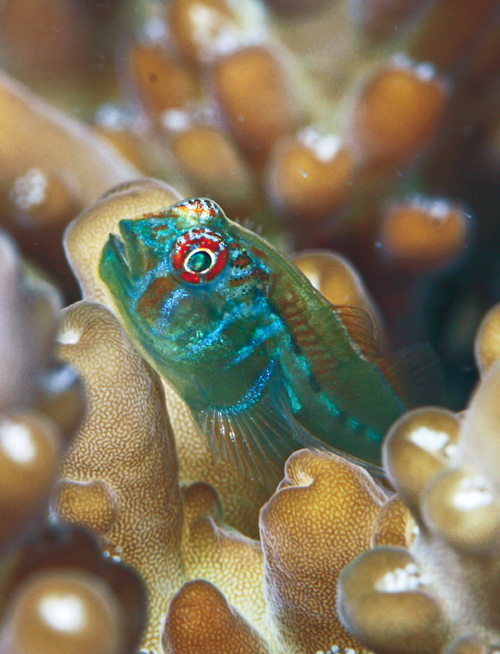 A juvenile Gobidon fish gets cozy on an Acropora coral. These fish spend their entire lives with the same coral. (Credit: Joao Paulo Krajewski/Georgia Tech)

“This species of coral is recruiting inch-long bodyguards,” says Mark Hay, a professor in the School of Biology at Georgia Institute of Technology (Georgia Tech) “There is a careful and nuanced dance of the odors that makes all this happen. The fish have evolved to cue on the odor released into the water by the coral, and they very quickly take care of the problem.”

Published Nov. 8 in the journal Science, the research was conducted as part of a long-term study of chemical signaling on Fiji Island coral reefs aimed at understanding these threatened ecosystems and discovering chemicals that may be useful as pharmaceuticals.

Because they control the growth of seaweeds that damage coral, the importance of large herbivorous fish to maintaining the health of coral reefs has been known for some time.

But Georgia Tech postdoctoral fellow Danielle Dixson suspected that the role of the gobies might be more complicated. To study that relationship, she and Hay set up a series of experiments to observe how the fish would respond when the coral that shelters them was threatened.

They studied Acropora nasuta, a species in a genus of coral important to reef ecosystems because it grows rapidly and provides much of the structure for reefs. To threaten the coral, the researchers moved filaments of Chlorodesmis fastigiata, a species of seaweed that is particularly chemically toxic to corals, into contact with the coral.

Within a few minutes of the seaweed contacting the coral, two species of gobies—Gobidon histrio and Paragobidon enchinocephalus—moved toward the site of contact and began neatly trimming away the offending seaweed.

“These little fish would come out and mow the seaweed off so it didn’t touch the coral,” Hay says. “This takes place very rapidly, which means it must be very important to both the coral and the fish. The coral releases a chemical and the fish respond right away.”

In corals occupied by the gobies, the amount of offending seaweed declined 30 percent over a three-day period, and the amount of damage to the coral declined by 70 to 80 percent. Control corals that had no gobies living with them had no change in the amount of toxic seaweed and were badly damaged by the seaweed.

To determine what was attracting the fish, Dixson and Hay collected samples of water from locations near the seaweed by itself, where the seaweed was contacting the coral, and from coral that had been in contact with the seaweed—20 minutes after the seaweed had been removed.

They released the samples near other corals that hosted gobies, which were attracted to the samples taken from the seaweed-coral contact area and the damaged coral—but not the seaweed by itself.

“We demonstrated that the coral is emitting some signal or cue that attracts the fish to remove the encroaching seaweed,” Hay says. “The fish are not responding to the seaweed itself.”

Similar waters collected from a different species of coral placed in contact with the seaweed did not attract the fish, suggesting they were only interested in removing seaweed from their host coral.

Finally, the researchers obtained the chemical extract of the toxic seaweed and placed it onto nylon filaments designed to stimulate the mechanical effects of seaweed. They also created simulated seaweed samples without the toxic extract.

When placed in contact with the coral, the fish were attracted to areas in which the chemical-containing mimic contacted the coral, but not to the area contacting the mimic without the chemical.

By studying the contents of the fish digestive systems, the researchers learned that one species, Gobidon histrio, actually eats the noxious seaweed, while the other fish apparently bite it off without eating it.
Consuming the toxic seaweed makes the fish less attractive to predators.

“The fish are getting protection in a safe place to live and food from the coral,” Hay notes. “The coral gets a bodyguard in exchange for a small amount of food. It’s kind of like paying taxes in exchange for police protection.”

“These kinds of positive interactions needs to be better understood because they tell us something about the pressures that have gone on through time on these corals,” says Hay. “If they have evolved to signal these gobies when a competitor shows up, then competition has been important throughout evolutionary time.”

The research was supported the National Science Foundation, the National Institutes of Health, and the Teasley Endowment at Georgia Tech.

Earth’s oceans probably once had a lot more salt