MICHIGAN STATE (US) — A bull shark found in the Gulf of Mexico in 2011 was a single shark with two heads, rather than conjoined twins, experts confirm.

There have been other species of sharks, such as blue sharks and tope sharks, born with two heads. This is the first record of dicephalia in a bull shark, says Michael Wagner, Michigan State University assistant professor of fisheries and wildlife, who confirmed the discovery with colleagues at the Florida Keys Community College. 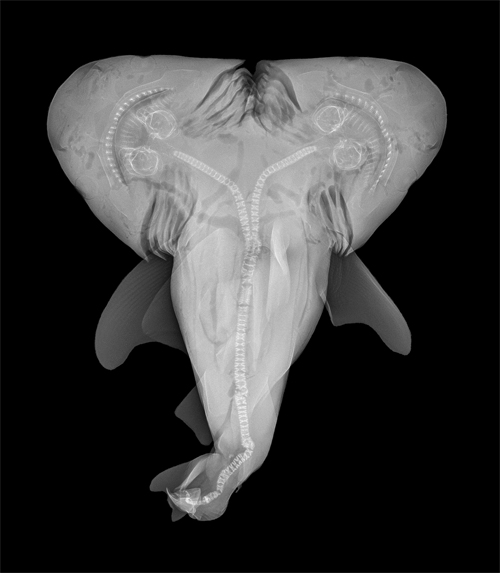 MRIs revealed two distinct heads, hearts, and stomachs with the remainder of the body joining together in back half of the animal to form a single tail. (Credit: Michael Wagner)

“This is certainly one of those interesting and rarely detected phenomena,” Wagner says. “It’s good that we have this documented as part of the world’s natural history, but we’d certainly have to find many more before we could draw any conclusions about what caused this.”

The difficulty of finding such oddities is due, in part, to creatures with abnormalities dying shortly after birth. In this instance, a fisherman found the two-headed shark when he opened the uterus of an adult shark.

The two-headed shark died shortly thereafter and had little, if any, chance to survive in the wild, Wagner adds.

“You’ll see many more cases of two-headed lizards and snakes,” he says. “That’s because those organisms are often bred in captivity, and the breeders are more likely to observe the anomalies.”

The shark was brought to the marine science department at Florida Keys Community College. From there, it was transported to Michigan State’s campus for further examination.

Wagner and his team were able to detail the discovery with magnetic resonance imaging. Without damaging the unique specimen, the MRIs revealed two distinct heads, hearts, and stomachs with the remainder of the body joining together in back half of the animal to form a single tail.

As part of the published brief, Wagner notes that some may want to attribute the deformed shark to exposure to pollutants.

“Given the timing of the shark’s discovery with the Deepwater Horizon oil spill, I could see how some people may want to jump to conclusions,” Wagner says. “Making that leap is unwarranted. We simply have no evidence to support that cause or any other.”