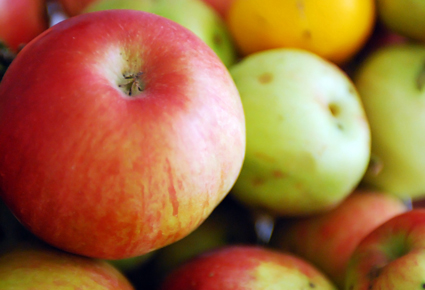 The study demonstrates that the amount of soluble fiber necessary to achieve these health benefits is a reasonable, not a pharmacological, amount. The recommended daily dietary recommendation is 28 to 35 grams of total fiber, but most of the FDA’s health claims are for insoluble fiber, and that’s where things get a bit complicated, Christina Sherry explains. “Not all fiber is created equal, although you wouldn’t know that by reading nutrition labels.”

U. ILLINOIS (US)—Soluble fiber—found in oats, apples, and nuts—reduces inflammation associated with obesity-related diseases and strengthens the immune system, according to a new study.

“Soluble fiber changes the personality of immune cells—they go from being pro-inflammatory, angry cells to anti-inflammatory, healing cells that help us recover faster from infection,” says Gregory Freund, a professor at the University of Illinois.

The study is available online and will be published in the May 2010 issue of Brain, Behavior, and Immunity.

This happens because soluble fiber causes increased production of an anti-inflammatory protein called interleukin-4, he explains.

Laboratory mice consumed low-fat diets that were identical except that they contained either soluble or insoluble fiber.

After six weeks on the diet, the animals had distinctly different responses when the scientists induced illness by introducing a substance called lipopolysaccharide that causes the body to mimic a bacterial infection.

“Two hours after lipopolysaccharide injection, the mice fed soluble fiber were only half as sick as the other group, and they recovered 50 percent sooner.

“The differences between the groups continued to be pronounced all the way out to 24 hours,” says Christina Sherry, now a postdoctoral fellow at the University of Michigan, who also worked on the study.

“In only six weeks, these animals had profound, positive changes in their immune systems.”

Now Freund has a new question: Could soluble fiber offset some of the negative effects of a high-fat diet, essentially immunizing obese persons against their harmful effects?

Scientists have long known that obesity is linked to inflammatory conditions, such as diabetes and heart disease. Yet, a recent study, demonstrated that fat tissue produces hormones that appear to compensate for this inflammation.

“There are significant anti-inflammatory components in fat tissue and, if they were strategically unleashed, they could potentially protect obese people from further inflammatory insults, such as a heart attack or stroke. In obese animals, you can see the body compensating in an effort to protect itself,” Freund says.

Not all fat is bad, he notes. The Mediterranean diet, which receives high marks for its health benefits, includes foods as olive oil; salmon, tuna, sardines, and trout, which contain important omega-3 and -6 fatty acids; and plant sources of fat, such as flaxseed.

“Now we’d like to find a way to keep some of the anti-inflammatory, positive effects that develop over time with a high-fat diet while reducing that diet’s negative effects, such as high blood glucose and high triglycerides.

“It’s possible that supplementing a high-fat diet with soluble fiber could do that, even delaying the onset of diabetes,” he explains.

The study demonstrates that the amount of soluble fiber necessary to achieve these health benefits is a reasonable, not a pharmacological, amount.

The recommended daily dietary recommendation is 28 to 35 grams of total fiber, but most of the FDA’s health claims are for insoluble fiber, and that’s where things get a bit complicated, Sherry explains.

“Not all fiber is created equal, although you wouldn’t know that by reading nutrition labels,” she says.

“Most manufacturers don’t tell you how much of each type of fiber a food contains, and we think it’s important that this information be included on a product’s packaging.”

Insoluble fiber, found in whole wheat and whole-grain products, wheat bran, and green, leafy vegetables, is also valuable for providing bulk and helping food move through the digestive system, but it doesn’t provide the boost to the immune system that soluble fiber provides.

The research was funded by the National Institutes of Health, the American Heart Association, and the USDA among others.

Kids with obesity often get too few (or too many) tests

Any fiber is good fiber, just get more of it