CALTECH (US) — A 25-year-old paraplegic man was able to stand and step on a treadmill voluntarily with assistance from a stimulating electrode array.

The electrical signals provided by the array stimulate the spinal cord’s own neural network so that it can use the sensory input derived from the legs to direct muscle and joint movements. Rather than bypassing the man’s nervous system to directly stimulate the leg muscles, this approach takes advantage of the inherent control circuitry in the lower spinal cord (below the level of the injury) to control standing and stepping motions.

More than 5.6 million Americans live with some form of paralysis; of these, 1.3 million have had spinal-cord injuries, often resulting in complete paralysis of the lower extremities, along with loss of bladder and bowel control, sexual response, and other autonomous functions.

The work, published in the British medical journal The Lancet, originated with a series of animal experiments beginning in the 1980s by study coauthors V. Reggie Edgerton and Yury Gerasimenko at the University of California, Los Angeles (UCLA) that ultimately showed animals with spinal-cord injuries could stand, balance, bear weight, and take coordinated steps while being stimulated epidurally—that is, in the space above the dura, the outermost of the three membranes that cover the brain and spinal cord.

Starting eight years ago, Joel Burdick, a professor of mechanical engineering and bioengineering at the California Institute of Technology (Caltech) teamed with the Edgerton lab to study how robotically guided physical therapy and pharmacology could be coupled to better recover locomotion in animals with spinal-cord injuries

Building upon these studies and the earlier work of Edgerton and Gerasimenko, Burdick and Yu-Chong Tai, a Caltech professor of electrical engineering and mechanical engineering, introduced the concept of high-density epidural spinal stimulation, which uses sheet-like arrays of numerous electrodes to stimulate neurons.

The goal of the system, Burdick says, “is to stimulate the native standing and stepping control circuitry in the lower spinal cord so as to coordinate sensory-motor activity and partially replace the missing signals from above”—that is, from the brain—”and shout ‘get going!’ to the nerves.”

To test this concept, which was first explored in animal models, the team used a commercially available electrode array, which is normally used to treat back pain. While this commercial array does not have all of the capabilities of the arrays tested so far in animals, it allowed the team to test the viability of high-density epidural stimulation in humans. 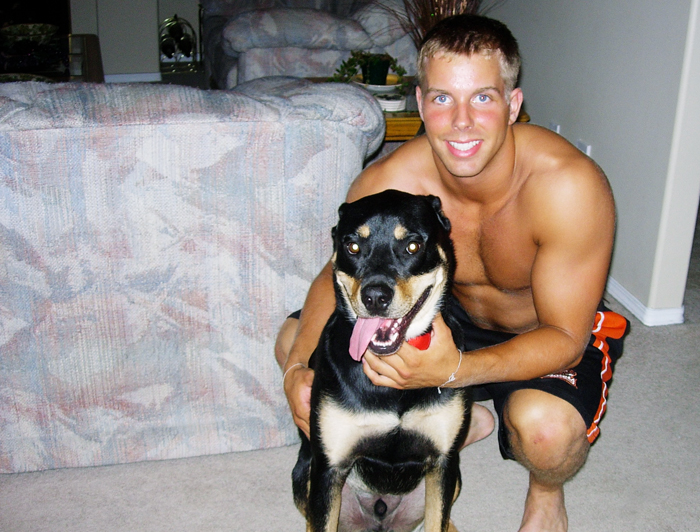 Rob Summers before a hit-and-run accident in 2006 that left him paralyzed below the chest. (Courtesy: University of Louisville)

The subject in the new work is Rob Summers, a 25-year-old former athlete who was completely paralyzed below the chest in a hit-and-run accident in July 2006. He suffered a complete motor injury at the C7/T1 level of the spinal cord, but retained some sensation in his legs.

Before being implanted with the epidural stimulating array, Summers underwent 170 locomotor training sessions over a period of more than two years at the Frazier Rehab Institute. In locomotor training, a rehabilitative technique used on partially paralyzed patients, the body of the patient is suspended in a harness over a moving treadmill while trained therapists repeatedly help manipulate the legs in a repetitive stepping motion.

The training had essentially no effect on this patient, confirming the severity of his spinal injury. The training also established a “baseline” against which the subsequent efficacy of the electrical stimulation could be measured.

After implantation with the device, however, Summers could—while receiving electrical stimulation and after a few weeks of locomotor training—push himself into a standing position and bear weight on his own. He can now remain standing, and bearing weight, for 20 minutes at a time. With the aid of a harness support and some therapist assistance, he can make repeated stepping motions on a treadmill. With repeated daily training and electrical stimulation, the patient regained the ability to voluntarily move his toes, ankles, knees, and hips on command. Summers has no voluntary control over his limbs when the stimulation is turned off.

In addition, over time he experienced improvements in several types of autonomic function, such as bladder and bowel control, as well as temperature regulation—a “surprise” outcome, Burdick says, that, if replicated in further studies, could substantially improve the lives of patients with spinal-cord injuries.

These autonomic functions began to return before there was any sign of voluntary movement, which was first seen in Summers about seven months after he began receiving epidural stimulation.

Adds Burdick, “This may help bladder and bowel function even in patients who don’t have the strength to undergo rigorous physical training like this patient”—who was an athlete and was in comparatively excellent physical condition before his injury.

The scientists aren’t yet fully sure how these functions were regained—or, indeed, how the control of voluntary function was returned through the procedure. “Somehow, stimulation by the electrodes may have reactivated connections that were dormant or stimulated the growth of new connections,” Burdick says. Almost certainly, reorganization of the neural pathways occurred below and perhaps also above the site of injury.

Notably, Summers had some sensation in his lower extremities after his injury, which means that the spinal cord was not completely severed; this may have affected the extent of his recovery.

The Food and Drug Administration (FDA) gave the research team approval to test five spinal-cord injury patients; the next patient will be matched with the first, in terms of age, injury, and physical ability, to see if the findings can be replicated. In subsequent trials, patients who have no sensation will be implanted with the device, to see if this influences the outcome.

“This is a significant breakthrough,” says Susan Harkema of University of Louisville, the lead author of the paper in The Lancet. “It opens up a huge potential to improve the daily functioning of individuals.”

“While these results are obviously encouraging, we need to be cautious, and there is much work to be done,” says Edgerton.

One of the biggest obstacles is that the electrode array implanted in the human patient is FDA-approved for back pain only. The use of the FDA-approved device was meant “as a test to see if our concepts would work, providing us with additional ammunition to motivate the development of the arrays used in animal studies,” says Burdick. The current FDA-approved arrays, he adds, have many limitations, “hence, the further development of the arrays that have currently only been tested in animals should provide even better human results in the future.”

Using a combination of experimentation, computational models of the array and spinal cord, and machine-learning algorithms, Burdick and his colleagues are now trying to optimize the stimulation pattern to achieve the best effects, and to improve the design of the electrode array. Further advances in the technology should lead to better control of the stepping and standing processes.

In addition, he says, “our team is looking at other ways to apply the technology. We may move the array up higher on the spinal column to see if it could affect arms and hands, as well as the legs.”

Burdick and his UCLA and University of Louisville colleagues hope that one day, some individuals with complete spinal-cord injuries will be able to use a portable stimulation unit and, with the assistance of a walker, stand independently, maintain balance, and perform some effective stepping. In addition, says Burdick, “our team believes that the protocol might prove useful in the treatment of stroke, Parkinson’s, and other disorders affecting motor function.”

The work was funded by the National Institutes of Health with additional support provided by the Christopher and Dana Reeve Foundation.