U. LEEDS (UK) — Using open-source software to sort the echolocation calls of eight bat species, researchers have created maps that show suitable areas for the animals to live.

In the Journal of Applied Ecology, researchers describe how they recorded more than 15,000 calls during 120 walks in the Lake District.

They are the most detailed large-scale habitat suitability maps ever created for bats in the UK, with a resolution of 50 meters. Bats make up a quarter of all of the UK’s native mammal species. 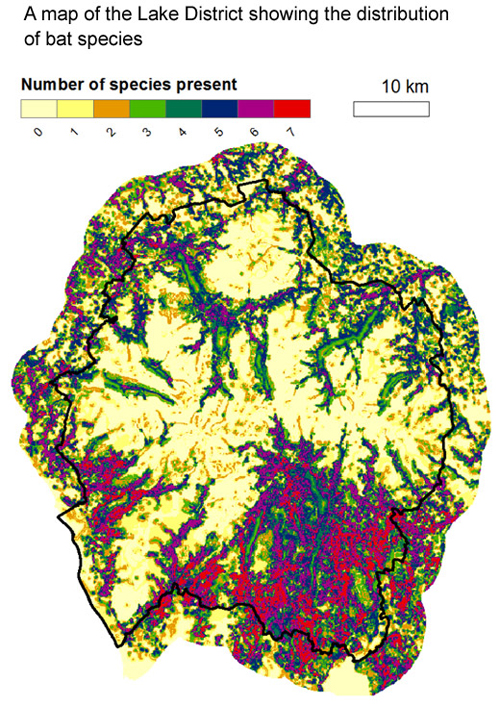 “Conservation managers and planners tend to look at the local effects of urbanization or other environmental change, but our research highlights the potentially severe impact on an ecosystem of more subtle changes over much larger areas,” says Professor John Altringham. (Credit: U. Leeds)

The impact of the maps will extend far beyond bat conservation, the researchers say. “Since bats are particularly sensitive to changes in the environment, they are recognized as good indicators for the overall health of an ecosystem,” says lead author Chloe Bellamy from the University of Leeds.

To produce these detailed maps, the researchers studied the likelihood of finding bats in relation to the characteristics of both their immediate environment and those of the much wider landscape, giving important insights into how they are affected by changes to the countryside.

While the impact on the bats’ movements caused by urban cover, such as roads, varied among different species over small distances, the researchers found that they were all affected when you looked at a much larger area.

Professor John Altringham, who led the research team, says: “Conservation managers and planners tend to look at the local effects of urbanization or other environmental change, but our research highlights the potentially severe impact on an ecosystem of more subtle changes over much larger areas.”

The development of new open source software by Chris Scott during his PhD studies enabled the researchers to distinguish between the echolocation calls of all eight species of bats that were studied.

The researchers have recently completed mapping the Yorkshire Dales and the North York Moors and are now continuing their research in the Northumberland National Park and the North Pennines.

University of Leeds Research Scholarships for Bellamy and Scott funded the research, with additional support from the People’s Trust for Endangered Species, the Forestry Commission, the National Trust, and Cumbria Wildlife Trust.

Bumble bees in places with fewer flowers are sicker