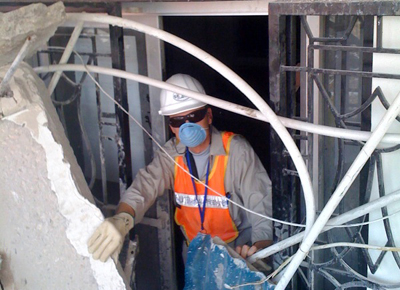 Engineer Andre Filiatrault is in Haiti, where he leads a team of structural engineers assessing the safety of buildings still standing after the Jan. 12 earthquake. Below, Filiatrault (in white hat) with children from a Haitian orphanage. (Images Courtesy: UB Media Relations)

U. BUFFALO (US)—Days after arriving in earthquake-ravaged Port-au-Prince, a team of French-speaking structural engineers led by Andre Filiatrault, University at Buffalo civil engineering professor, was appointed by the United Nations as its interim lead coordinating team for organizing and initiating building assessments.

Filiatrault, who is director of the Multidisciplinary Center for Earthquake Engineering Research (MCEER), left Buffalo on Jan. 21 for Haiti to lead the team of structural engineers to help determine which structures left standing after the Jan. 12 earthquake and its aftershocks may pose a threat to human safety. 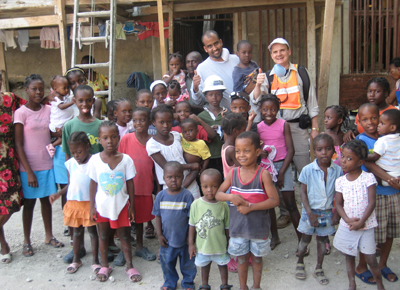 Filiatrault recently described what he is seeing on the ground in Port-au-Prince as the city and its population struggle to survive.

How is your work progressing?

Things are going well for our team despite difficult conditions that we encounter daily in the field. This work is pretty intense and the environment is rough, both physically and psychologically. The UN has now adopted a formal building-assessment procedure based on the initial framework that our team has developed. We are now very busy with requests coming from UN staff housing, hospitals, schools, private buildings, etc. Many cases are difficult, but at the same time inspiring and we are trying to perform each assessment as soon as possible. The good thing is that we’ve been able to arrange transport and military escorts.

What is the most surprising observation you have made during your structural assessment?

Buildings are still standing, but people do not want to use them because of fear of aftershocks. We inspected several hospitals that are empty although the buildings were perfectly fine. We are trying to influence the owners and the UN so that people may reoccupy them. At this moment, close to 100 percent of the Port-au-Prince population sleeps in tents or outside. It is very disturbing to see perfectly functional empty hospitals when in other regions of Port-au-Prince, patients are being treated outside under tents in the heat. The lack of understanding of earthquakes here is definitely adding to the hardship caused by this disaster.

I also visited an orphanage yesterday in which 64 orphans have been living outside in a back alley. The conditions were disturbing and the building, although not built for any seismic resistance, did very well and did not suffer any significant damage. I tried to convince the headmaster to let the children back in. The only thing I could do is file the report with the UN and recommend urgent action to bring the children back in.

How do your structural assessments impact on the ability of Haitians to access food and water and other critical supplies?

We have inspected very large warehouses for the UN’s World Food Programme (WFP). These warehouses are sensitive since they contain several thousand tons of food and have not been accessed since the earthquake. WFP wanted to know if they can enter these buildings to get the food out. The construction types of these warehouses vary from unreinforced masonry, concrete frames, and steel structures. The roofs of all of these structures are steel truss systems. In general, these structures performed well, although some should not be used at all.

What is being done to keep people away from structures that could still pose a danger?

People were camping, walking, etc., under very unstable buildings. We made the decision to send two members of our team to rope off the multitudes of hazard areas in the yards of a very large Catholic school to prevent further injuries or death in the event of more aftershocks. It is not our responsibility to do this kind of work, but we felt that it had to be done because these people have not been helped at all yet.

Have you seen any examples, even at this very early point, of how people in this impoverished nation may already be attempting to rebuild?

We observed several instances of people who were salvaging from the rubble of pancaked buildings reinforcing (steel) bars out of the broken concrete elements. They would then straighten them and re-sell them for new construction. This is, of course, improper as these bars would have experienced large inelastic deformations and would be very brittle after restraightening. This is the kind of activity that will need to be prohibited by the government in order to improve the construction quality in Haiti.