BROWN (US) — A new therapy headed to human trials slows muscle damage in mice with the genetic mutation that causes muscular dystrophy.

Biglycan causes a natural muscle-building protein known as utrophin that is prevalent in young children to collect in muscle cell membranes. Details of the study with mice is reported in the Proceedings of the National Academy of Sciences.

Duchenne Muscular Dystrophy is a fatal genetic mutation in about one of every 3,500 boys. They are unable to produce a protein called dystrophin that keeps muscles strong. By eight years of age, the boys begin to have trouble walking. By their teens they are often in wheelchairs, and by their 20s muscle function is so degraded that they die.

“This is all aimed at getting a therapy that will meaningfully improve the condition of patients,” says Justin Fallon, professor of neuroscience at Brown University and the paper’s senior author. “This is an important step along that path.” 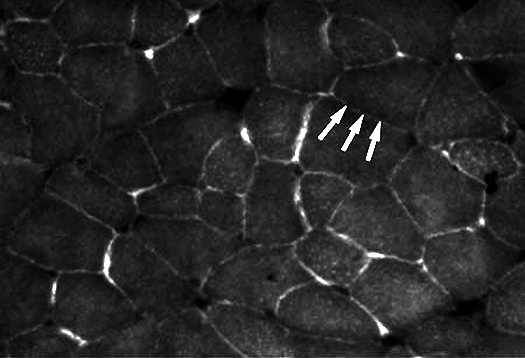 This fall, the startup company Tivorsan Pharmaceuticals licensed rights from Brown to the key protein, biglycan, hoping to bring the potential therapy through clinical trials.

Biglycan restores the muscle-strengthening presence of utrophin, which is normally prevalent only in very young children. Utrophin still exists in adults, but in fewer places and not where it can help muscular dystrophy sufferers who cannot produce dystrophin, which keeps adult muscles strong.

Early tests
In experiments described in the paper, Fallon’s team showed that biglycan delivered to the bloodstream draws utrophin to the cellular membranes of muscle cells. Much as utrophin does when it is present in fetuses, infants and toddlers, the protein works to help the cells build and retain their strength.

The team also subjected mouse muscles to a standardized stress test where they are simultaneously stretched and caused to contract. The test ultimately weakens even healthy muscle, but in the tests conducted by researchers and co-authors from the University of Pennsylvania, the muscles of muscular dystrophy mice treated with biglycan lost their strength 30 percent more slowly than similar mice who were untreated.

Lasting improvement
In more recent tests using an improved formulation of biglycan, Fallon says, the team has seen that figure rise to 50 percent in some muscles, meaning that mice treated with biglycan are holding on to more of their function for a longer time.

Fallon says the effects of treatment with biglycan lasted through months of testing. Several basic tests for side effects during that time frame, such as kidney and liver function, did not indicate any harm from the therapy.

With the efficacy of biglycan apparent in the mouse model of Duchenne Muscular Dystrophy, Fallon is eager to see if it can improve the lives of thousands of children.

“The next big step is testing in humans,” Fallon says.

Researchers from Brown, the University of Pennsylvania, and University of California, Davis, contributed to the work, which was supported by the National Institutes of Health, Charley’s Fund, the Nash Avery Foundation, and Parent Project Muscular Dystrophy.

Would you wear clothes made of synthetic muscle fibers?

Website offers tips and tricks to fix a leaky bladder