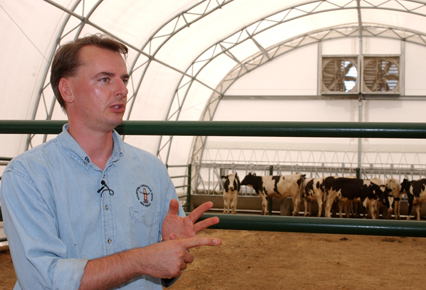 Last week, on the eve of the international climate summit in Copenhagen, McCartney and the chair of the U.N.’s Intergovernmental Panel on Climate Change launched a European campaign called “Less Meat = Less Heat.”

Mitloehner, associate professor and air quality specialist at UC Davis, says McCartney and others, such as the promoters of “Meatless Monday,” seem to be well-intentioned but not well-schooled in the complex relationships among human activities, animal digestion, food production, and atmospheric chemistry.

Mitloehner traces much of the public confusion over meat and milk’s role in climate change to two sentences in a 2006 United Nations report, titled “Livestock’s Long Shadow.”

Printed only in the report’s executive summary and nowhere in the body of the report, the sentences read: “The livestock sector is a major player, responsible for 18 percent of greenhouse gas emissions measured in CO2e (carbon dioxide equivalents). This is a higher share than transport.”

The statements are not accurate, and their wide distribution through news media have put us on the wrong path toward solutions, Mitloehner says.

“We certainly can reduce our greenhouse-gas production, but not by consuming less meat and milk. Rather, in developed countries, we should focus on cutting our use of oil and coal for electricity, heating, and vehicle fuels.”

Mitloehner says leading authorities agree that, in the U.S., raising cattle and pigs for food accounts for about 3 percent of all greenhouse gas emissions, while transportation creates an estimated 26 percent.

“The developed world’s efforts should focus not on reducing meat and milk consumption,” says Mitloehner, “but rather on increasing efficient meat production in developing countries, where growing populations need more nutritious food.”

Mitloehner says he particularly objects to the U.N.’s statement that livestock account for more greenhouse gases than transportation, when there is no generally accepted global breakdown of gas production by industrial sector.

He notes that “Livestock’s Long Shadow” produced its numbers for the livestock sector by adding up emissions from farm to table, including the gases produced by growing animal feed; animals’ digestive emissions; and processing meat and milk into foods.

But its transportation analysis did not similarly add up emissions from well to wheel; instead, it considered only emissions from fossil fuels burned while driving.

“This lopsided ‘analysis’ is a classical apples-and-oranges analogy that truly confused the issue,” Mitloehner says.

Most of Mitloehner’s analysis is presented in a recent study titled “Clearing the Air: Livestock’s Contributions to Climate Change,” published in October in the peer-reviewed journal Advances in Agronomy.

The study was funded by California Air Resources Board, California Environmental Protection Agency, and Beef Checkoff Program. Since 2002, Mitloehner has received $5 million in research funding, with 5 percent of the total from agricultural commodities groups, such as beef producers.

Couples can sway each other’s views on climate change