U. WASHINGTON (US) — Finding northern spotted owls has gotten much easier thanks to dogs specially trained to sniff out the owls’ pellets on the forest floor.

A series of forest searches by the trained dogs improved the probability of finding the owls by locating their pellets by nearly 30 percent over a series of traditional vocalization surveys.

Pellets are the undigested bones, fur, and other bits that the owls regurgitate. 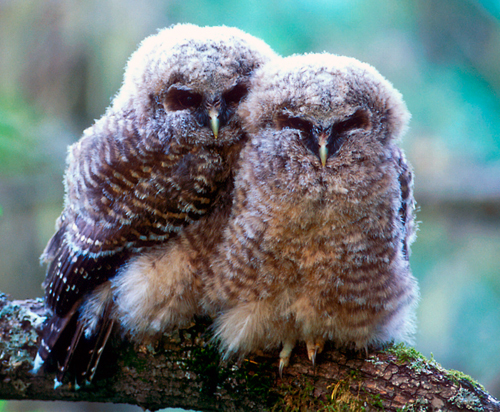 “We have forest practices in place to benefit the spotted owl but some are saying, ‘Look these restrictions didn’t make any difference because the barred owl is just coming in and taking over,’” Samuel Wasser says. (Credit: USFWS Endangered Species)

Since the 1980s, scientists and land managers have relied on vocalization surveys that use simulated northern spotted owl calls to elicit owl responses. As forests have been invaded by barred owls, which displace and even kill spotted owls, concerns have grown that spotted owls may be timid about responding to such vocalization surveys and may open themselves to attack if they do, says Samuel Wasser, University of Washington research professor and director of the Center for Conservation Biology.

“Wildlife managers spent years trying to get good forest practices in place that are contingent on spotted owl presence and now the invading barred owl is hindering our ability to show it’s there,” Wasser says.

“The dogs have higher detection probabilities than vocalization surveys under some circumstances, can simultaneously detect spotted and barred owls and don’t need owls to vocalize to be detected. The vocalization surveys have the advantage of being able to cover a much, much bigger area. The two together would be very complementary.”

A comparison of the two approaches, published in a paper August 15 in PLOS One, is based on work in the Shasta-Trinity National Forest in northern California.

The researchers trained Shrek, a Labrador retriever mix, and Max, an Australian cattle dog mix, to locate owl pellets and feces of northern spotted and barred owls at the base of trees where the owls roost. Maps showing the habitat types were used to hone in on the best places to search for roosts. DNA analysis of the samples confirmed the species of owl.

In the study area barred owls were relatively uncommon. The average detection probability was about 20 percent with the dogs compared to about 7 percent using vocalization surveys.

“This was a carefully planned study to try to make everything as equivalent as we could,” Wasser says. “More work is needed to determine when the two methods work best together or if one is preferable over the other.” The costs of the two approaches were roughly equivalent, he says.

Wasser’s co-authors from University of Washington are Lisa Hayward, Jennifer Hartman, Rebecca Booth, Kristin Broms, Jodi Berg, Elizabeth Seely, and Heath Smith, as well as Lyle Lewis, who is retired from the US Fish and Wildlife Service, which funded the work.

“We have forest practices in place to benefit the spotted owl but some are saying, ‘Look these restrictions didn’t make any difference because the barred owl is just coming in and taking over,’” Wasser says.

“We’re at risk if we abandon the forest practices before we really have the numbers to understand the tradeoff between forest management and barred owls.”