U. PENNSYLVANIA (US) — First responders who had working dog partners during the 9/11 search-and-rescue efforts have lower rates of post-traumatic stress disorder (PTSD) than other rescue groups, a survey shows.

Anyone who has had a pet instinctively knows what several physical and mental health studies have shown: people who have a companion animal have lower levels of stress, anxiety, and depression than the general population. But with love comes the possibility of loss; when pets fall ill, are hurt, or die, their owners bear the psychological burden of increased risk of depression and other ailments.

Melissa Hunt, associate director of the clinical training program psychology at the University of Pennsylvania, has long been interested in this dynamic as it relates to people and their pets. But a chance encounter propelled her to study it in an extreme case: search-and-rescue dogs and their handlers. 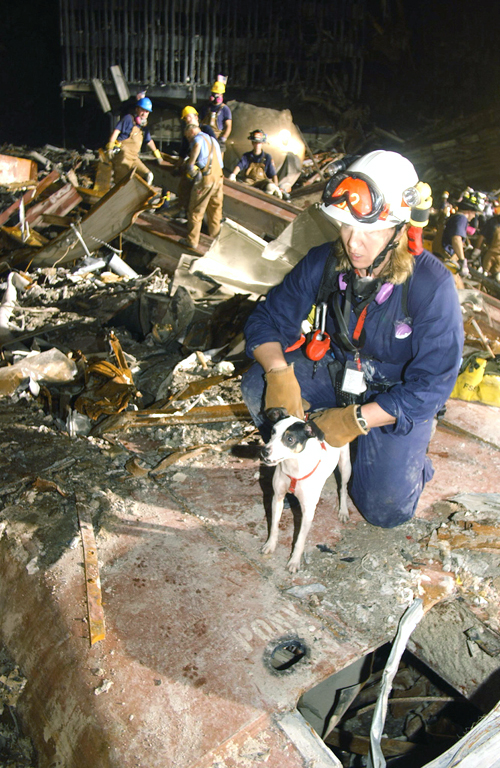 “Search-and-rescue dogs are not just pets; they’re partners,” Hunt says, meaning this dynamic is even stronger—and the stakes even higher—for people who work with animals.

Emergency responders, such as those who work on canine search-and-rescue teams, often experience difficult deployments where the stress-reducing benefits of an animal could be particularly helpful. But, like their human partners, working animals are also at risk, and this could amplify the negative psychological impact handlers face.

When it comes to working dogs and their owners, does the increased benefit outweigh the increased risk? For Hunt, answering this question began by being in the right place at the right time.

Hunt was presenting her work on the psychological impact of the loss of a pet at Penn’s Ryan Veterinary Hospital, hoping to share some practical advice with veterinarians who must often break bad news to pet owners.

The time was October 2001, and in the audience was Cindy Otto, an associate professor in critical care at Penn’s School of Veterinary Medicine. Otto had recently returned from Ground Zero, where she provided medical support for canine search-and-rescue teams combing the rubble of the World Trade Center.

With concerns fresh in the public’s mind about the long-term health effects the dust and debris might impose, she was setting up a study that would track the physical health of the working dogs deployed on 9/11.

Hunt and Otto formed a collaboration that extended the scope of the study to include the psychological well being of the dogs’ handlers. Working with Hunt’s graduate student Jennifer Alvarez and James Serpell, director of PennVet’s Center for the Interaction of Animals and Society, the team gathered data via self-reported questionnaires and telephone interviews at yearly intervals.

About a hundred handlers and dogs completed the three-year study, out of the approximately 200 teams contacted. Of the full participants, about a third were a control group of search-and-rescue teams that were not deployed on 9/11.

Their responses ultimately served to underscore the uniquely traumatic impact of the attacks, as deployed handlers, compared to control handlers who did not deploy on 9/11, showed acute elevations in symptoms of post-traumatic stress disorder and depression.

But the results also showed that the benefit conferred by the human-animal partnership is real and significant.

“For these search-and-rescue workers,” Hunt says, “we saw rates of severe psychopathology and post-traumatic stress disorder that are well below what has been reported in other first responder groups, especially a number of years out from the attacks.”

The results of the study, published in the journal Anthrozoös, coincides with the opening of the Penn Working Dog Center, which cut the ribbon on its first physical space on the 11th anniversary of the 9/11 attacks. Founded in 2007 and directed by Otto, the Working Dog Center aims to train dogs and to advance research.

“Despite their overarching resilience even after potentially traumatic deployments, working dogs and their human handlers are still at risk as a function of the work they do,” Hunt says.

“The Penn Vet Working Dog Center, which was inspired by those dogs that responded to the 9/11 attacks,” Otto says, “is focused on the health and performance of working dogs, which clearly includes that important relationship with the handler.”

PTSD may speed up cellular aging