U. WASHINGTON (US) — DNA from skeletal remains clears up competing theories about the origins of the earliest European civilization.

DNA analysis is unearthing the origins of the Minoans, who some 5,000 years ago established the first advanced Bronze Age civilization in present-day Crete. The findings suggest they arose from an ancestral Neolithic population that had arrived in the region about 4,000 years earlier.

The British archeologist Sir Arthur Evans in the early 1900s named the Minoans after a legendary Greek king, Minos. Based on similarities between Minoan artifacts and those from Egypt and Libya, Evans proposed that the Minoan civilization founders migrated into the area from North Africa. 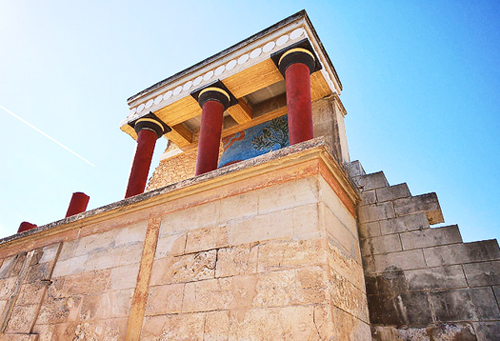 One of the buildings in Knossos restored by British archeologist Sir Arthur Evans. Knossos was the major civil center of the Minoans. (Credit: John & Mel Kots/Flickr)

Since then, however, other archaeologists have suggested that the Minoans may have come from other regions, possibly Turkey, the Balkans, or the Middle East.

Now, a team of researchers in the United States and Greece has used mitochondrial DNA analysis of Minoan skeletal remains to determine the likely ancestors of these ancient people.

Mitochondria, the energy powerhouses of cells, contain their own DNA, or genetic code. Because mitochondrial DNA is passed down from mothers to their children via the human egg, it contains information about maternal ancestry.

Results published in Nature Communications suggest that the Minoan civilization arose from the population already living in Bronze Age Crete. The findings indicate that these people probably were descendents of the first humans to reach Crete about 9,000 years ago, and that they have the greatest genetic similarity with modern European populations.

George Stamatoyannopoulos, University of Washington professor of medicine and genome sciences, is the paper’s senior author. He believes that the data highlight the importance of DNA analysis as a tool for understanding human history.

“About 9,000 years ago,” he notes, “there was an extensive migration of Neolithic humans from the regions of Anatolia that today comprise parts of Turkey and the Middle East. At the same time, the first Neolithic inhabitants reached Crete.”

“Our mitochondrial DNA analysis shows that the Minoan’s strongest genetic relationships are with these Neolithic humans, as well as with ancient and modern Europeans,” he explains.

“Genetic analyses are playing in increasingly important role and predicting and protecting human health,” Stamatoyannopoulos adds. “Our study underscores the importance of DNA not only in helping us to have healthier futures, but also to understand our past.”

Further analysis showed that the Minoans were only distantly related to Egyptian, Libyan, and other North African populations. The Minoan shared the greatest percentage of their mitochondrial DNA variation with European populations, especially those in Northern and Western Europe.

The National Institutes of Health and private funding supported the research.

5 lessons for COVID-19 from the fight against HIV