U. CHICAGO (US) / U. TORONTO (CAN) — Natural disasters prompt older children to be more giving, but have the opposite effect on younger kids, who tend to become more selfish.

The finding was discovered in a rare natural experiment with 9- and 6-year-olds in China around the time of the country’s horrific 2008 earthquake. 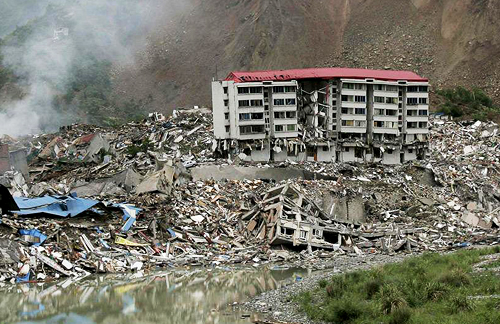 In early 2008, the researchers were in Sichuan, China, working on a study on empathy and altruism among children. When an earthquake hit the area in May 2008, the team decided to change the course of their study and explore what the experience of a disaster might mean to the children’s concern for others. (Credit: Hong Li, Jean Decety, Kang Lee/U. Chicago)

“The study provides the first evidence to suggest that experiencing a natural disaster affects children’s altruistic giving significantly,” says Kang Lee, professor at the University of Toronto. “The immediate negative effect of the earthquake on 6–year-olds suggests that altruism at that age is still fragile.”

“We think that empathy is the intervening variable,” says co-author Jean Decety, professor of psychology and psychiatry at the University of Chicago. The study demonstrates these developmental differences.

As a child grows up, the prefrontal cortex matures with improved connections among the circuits involved with emotion. “As they grow older, children become able to better regulate their own vicarious emotions and understand better what they feel, and they are more inclined to act pro-socially,” Decety says.

“Even with the group of 9-year-olds, we show that not only are they more altruistic and give more than the 6-year-olds, but those 9-year olds with higher empathy scores donated significantly more than 9-year-olds with lower scores,” she adds.

In early 2008, the researchers were in Sichuan, China, working on a study on empathy and altruism among children and had completed the first portion of it. In May 2008, an earthquake struck the region, killing 87,000 people.

The team immediately decided to change the course of their study and explore what the experience of a disaster might mean to the children’s concern for others.

For the study, to be published in an upcoming edition of Psychological Science, the team tested children’s altruism by having them individually pick 10 favorite stickers from a set of 100. Afterward, they were told some of their classmates were not included in the test and asked if they would give up some of the stickers for the others to enjoy.

Without the researcher watching, children would put stickers into an envelope and seal it if they wanted to share. The number of stickers they chose to give up was determined to be a measure of altruism.

The children also were given a standard test of empathy, which gauged their reactions to seeing animated vignettes of people who are injured. Nine-year-olds had significantly higher empathy scores than 6-year-olds.

“Experience with adversity, though generally having negative impacts on children, may in fact be beneficial, at least for older children, in evoking empathy toward others and in turn enhancing their altruistic giving, albeit temporarily,” says Hong Li of Liaoning Normal University.

The John Templeton Foundation, the Social Sciences and Humanities Research Council of Canada and the Chinese National Science Foundation supported this research.