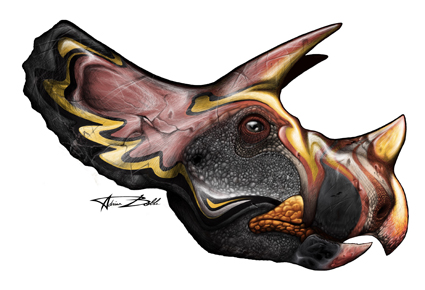 “Despite their appearance, dinosaurs are ecologically very similar to mammals of today,” says Matthew Vavrek. “They were able to colonize and dominate the landscape over very large distances, and were not nearly as constrained as we might have once thought.” By examining a single time slice and all known specimens of dinosaurs from North America’s western interior, researchers concluded multiple dinosaur faunal regions did not exist. (Credit: Adrian Bobb/McGill)

MCGILL (CAN)—New evidence suggests the entire western interior of North America was likely once populated by a single community of dinosaurs thanks to a warm and moderate climate.

According to a statistical analysis of the fossil record, dinosaurs were adept at coping with all sorts of environments, and not as restricted in their geographic ranges as previously thought.

Using data from the Paleobiology Database, researchers at McGill University in Montreal found that the difference in species between regions over North America was relatively low—low enough to consider it a single homogeneous fauna.

The finding is significant as it confirms that dinosaur ecosystems may have been as large as continents. The paper was published in the journal Proceedings of the National Academy of Sciences.

The McGill team zeroed in on alpha diversity, the number of species in an immediate area, versus beta diversity, which are the differences in species between two different areas. Their research shows low beta biodiversity among these dinosaurs with values comparable to species living in homogeneous climates today, but on smaller geographic scales.

“This is significant because we lack living analogues of a complete terrestrial megafauna living in those kinds of stable climates. The findings give us an insight into what kind of ranges these types of communities may have had,” explains Hans Larsson, a professor at McGill.

“We also demonstrate that after more than a century of collecting dinosaurs in North America, we should expect to find about 16 types, on average, in any one region of western North America just before their mass extinction.”

The long extinct dinosaurs are not just long dead fossils, but they offer a unique insight into a complex megafauna that responded to their environment. But even though they are extinct, they can tell us about the ecology of the animals we see today.

“Despite their appearance, dinosaurs are ecologically very similar to mammals of today,” says PhD student Matthew Vavrek. “They were able to colonize and dominate the landscape over very large distances, and were not nearly as constrained as we might have once thought.”

By examining a single time slice—the Maastrichtian stage (71-65 million years ago)—and all known specimens of dinosaurs from the Western Interior region of North America, the duo concluded that multiple dinosaur faunal regions did not exist.

“Our results show low beta diversity and support a single dinosaur community within the entire Western Interior region. This widespread ecosystem was likely due to the homogenous climate present in this region at the time,” says Larsson. “What is exciting about this result is that now we can begin to ask many more questions about how such a large homogeneous community of dinosaurs lived.

“Did they migrate, or have adequate amounts of gene flow between regional populations, or a mixture of both? How did this widespread dinosaur megafaunal community affect other animals and plants on the regional and continental scale?  We’re just beginning to scratch the surface of dinosaur ecology.”

Loss of huge mammals led to rise in wildfires